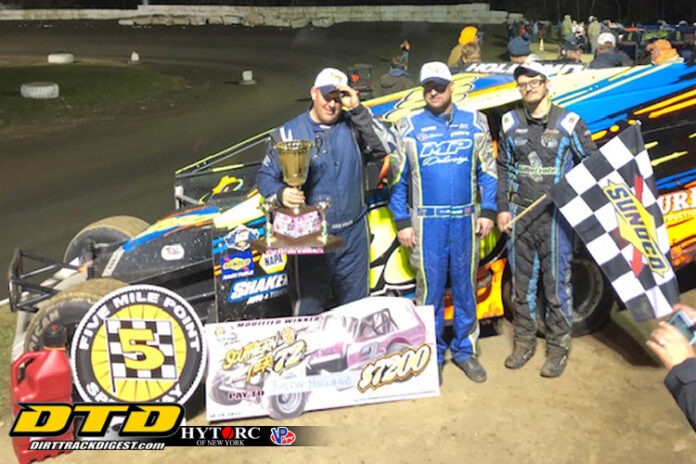 This past weekend Five Mile Point Speedway in Kirkwood ran their final event prior to the track closing after 72 years as the popular dirt track in the Southern Tier of NYS.

Of course with it being the final event there were many fans and drivers that made the trip to say their goodbyes to the 1/4-mile dirt track.  The two-day weekend events were part of the National Quarter Mile Dirt Track Championship and the final event was won by Justin Holland of White Lake, NY,  Dave Marcuccilli was second and Bobby Hackel, IV finished third.

In Sportsman competition, Lance Hill of Cobleskill was the winner in the Future Sportsman division race that was part of a five race Fall series at the track.  Hill had traveled to Five Mile Point for all five events in the series and on a couple occasions did not fare so well; 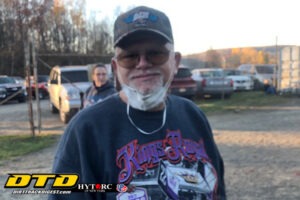 one night he said was going well until he tangled with another car and on another night broke a front U-Joint.  His finishes in the Fall Series were a sixth, fourth, 11th and seventh and his win on Saturday.  Hill was fourth in points entering this past weekend.

On our way to Five Mile Point on Saturday we met Doug from Watervliet, a race fan that had never been to Five Mile Point and said he wanted to get there for the final event.  We met him again at the track before the feature started and he shared with us that he was very happy that he had made the trip. 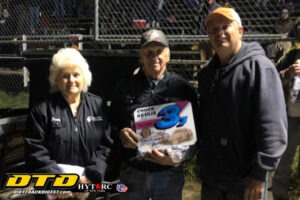 One of the highlights of the day at Five Mile Point was to have 14-time champion Chuck Akulis in the house along with his wife.  Chuck is the most winning driver at the Kirkwood oval with 107 wins, starting with his first win on May 14, 1966.  His last win came on July 6, 1996; an outstanding 30-year career.

Along with the trophy on Saturday, the winner’s $7200 check had a likeness of the Pink Panther No. 3 on it.  Also Chuck was presented with a plaque commemorating his time at the track by promoter, Andrew Harpell.

We asked Harpell how he was feeling about the final event and the end of an era and something he grew up with.  He said, “I’ve had no time to even think about it and it probably won’t be until weeks to come that I will be able to look back.” 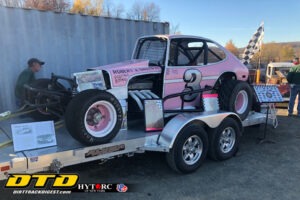 Driving the Modified No. 44 at Five Mile Point on Saturday was Aleia Geisler, 27-year-old from Emmaus, Pa.  Aleia has been racing for 17 years with her dad, Ray by her side.  At 10-years-old she raced 1/4 Midgets, at 16 she moved to Four Cylinders on Asphalt at Mahoning Valley, at 17 she was driving a Crate Sportsman at Bridgeport, then went back to Mahoning Valley in a Modified.  In 2016 she came to Five Mile Point to race Modifieds.

Aleia has three Modified wins at the Kirkwood oval, her first on August 18, 2018 and her 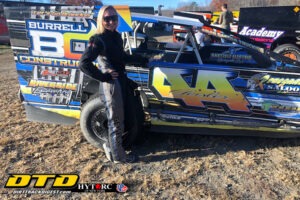 last on the final point night at the track, August 27, 2022.  Along with her one win this season she had three top fives and six top tens.  She finished the season seventh in points.

As the day went on we learned much more about Aleia’s season.  The announcer mentioned she was racing in memory of her dad, Ray, who died from injuries in a two-car accident on Thanksgiving weekend, 2021.

When we spoke with her this week she said that when she lost her dad, she had a new car sitting in her garage and at first she gave thought to just selling everything.  After giving it some more thought she decided to take on all the skills her father had taught her, setting up the car, siping tires, grooving and grinding tires and she even had to learn to drive the hauler.  She drives two hours weekly to Five Mile Point and helps support her racing with her job as a Nanny.  Her dad has had a heavenly seat this season watching his daughter the racer.

The Pro Stock division at local tracks has become one of the most popular and competitive.  Originally the Street Stock division at many tracks, the DIRTcar organization brought them to Super Dirt Week for the first time in 1997 where they ran as Street Stocks through 1998 as they grew into Pro Stocks and became a crowd favorite.

As the popularity of the Pro Stocks has grown, they continue to be added to the big shows at the end of the season in the Northeast.  BD Motorsports promoter, Brett Deyo  added them to his Speed Showcase event at Port Royal the past two years.  Eastern States added them the past couple years.   As their growth continues so do the innovations and improvements to the cars and then of course so do the controversies.  It’s just racing. 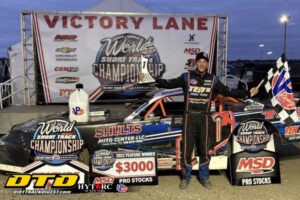 DIRTcar hosted the World Short Track Championships in Charlotte, NC this past weekend and the Pro Stock division kicked off the events and Fonda regular and Utica-Rome 2022 Champion, Josh Coonradt of Fort Edward took home the trophy.  Coonradt was followed to the finish line by another Fonda and Albany-Saratoga regular, Luke Horning of Gloversville with Pete Stefanski of North Tonawanda finishing in the third position.

In other racing news, according to a Facebook post, Afton Motorsport Park promoter, Ron Ford is already making plans for his 2023 season at the Afton Fairgrounds and there is a big change to the plans, Afton Motorsports Park will change their race night to Saturdays for the 2023 season.

Very sad news for the racing world this week with the sudden passing of Bill Shea, former promoter, car owner and fan and a huge part of the racing community.  We send our condolences to his wife, Kim and his family.