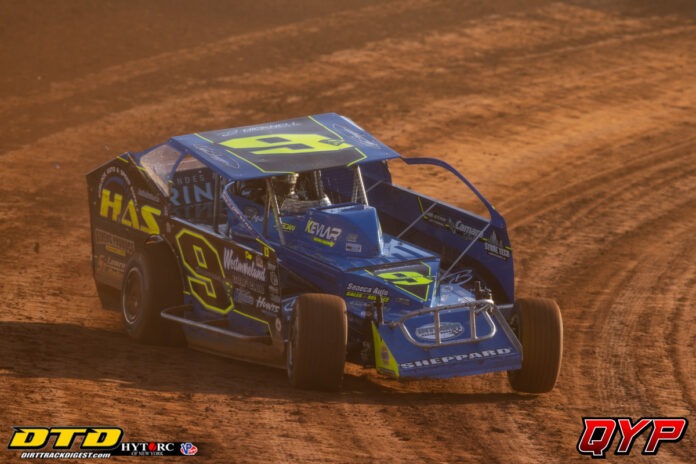 CONCORD, NC –  Erick Rudolph had to make some strategic, yet tough, decisions coming into the 2022 Modified season.

Running a full Super DIRTcar Series schedule is appealing, and Rudolph has done it in the past. This year, there was a different climate in the real world, and it forced the Ransomville, N.Y., standout to pick-and-choose his races wisely.

There were a lot of things to consider. Diesel prices were soaring, which made traveling expensive. Crew help also had to be considered, which altered the racing schedule a little bit after Florida.

But Rudolph has made it work, putting together a season that included 16 victories. On Thursday night at The Dirt Track at Charlotte, he also showed he can hang with the best drivers in the business, when he polished off a runner-up finish in the opening night of the World Finals.

“We’ve traveled quite a bit, but we didn’t run the whole series,” Rudolph said. “We just did whatever made the most sense for our team with Diesel prices, and there is something to be said for help and what they’re available to do. Then, you also have the names on the car of all the sponsors and where they would like to see you go, and you’ve got to try to keep everybody happy.

“I mean, I’m proud of where we are as a team. Like I said, we’ve got 16 wins, and I don’t know how many top fives. It seemed like not matter where we went, we were always right in the top five and putting ourselves in contention.”

Rudolph did that and more throughout the 30-Lap World Finals opener. He battled eventual winner Mat Williamson through the middle stages of the event and held off Matt Sheppard in the closing laps for a second-place run.

The performance the type Rudolph and people close to the sport expect from this team. It also shows how far this team has come since the early-season struggles through Florida and the first two months of the season.

Things started to come around in April. A trip to Lernerville Speedway paid dividends and put Rudolph in the win column, and from there, the victories and consistent finishes started to pile up.

“The first couple of months weren’t great at all or even good, really,” Rudolph said. “They were just bad, and then we had a turning point there in April. The dowel pins came out of the block, and we thrashed around, trashed around, and we got that fixed and won that night [at Lernerville].

The year isn’t over. Rudolph has a chance to add to his season laurels with two more shows at The Dirt Track at Charlotte. Then, he heads to Louisiana with a chance to take momentum into the Winter months and next season.

“We’re going to be in Louisiana, which I look forward to, but I’m not sure how important it is,” Rudolph said. “I mean, it gives a morale boost, so there is something to be said for that … running well down here and well down South.

“Anytime you go south of Pennsylvania, the tracks are so much different than where most of us run at home. The setups are a little different, and the driving style is a little bit different. At the same time, you have to be well rounded wherever you go, and that’s what makes a great team.”

Matt Sheppard has put together one of the best seasons in Dirt Modified history with 41 wins and over $500,000 in earnings.

The surge has been impressive. He had dominated the last six weeks, winning every big race, including the Fonda 200, Outlaw 200, Eastern States, and Super Dirt Week.

Now, Sheppard, who finished third in the World Finals opener, is looking to surpass his previous best season, which occurred in 2017. That same year, he registered 41 wins, and with two more races this weekend and a trip to Louisiana on tap, there is a good chance he breaks his previous best win total.

“We just flat out weren’t good enough, and we couldn’t take advantage after restarts,” Sheppard said. “I felt like we finally got little momentum going there at the end when we got by Anthony [Perrego], and we were really working Erick over pretty hard there but ran out of laps. Third is a solid run for us, and we’ll go to work to try and make it a little better.

Keith Flach took a wild ride during the first heat race, when he flipped in Turn 3 after suffering contact with Louden Reimert. He climbed from his car and was OK.

According to the team, they do have a back-up car and will be racing the rest of the weekend. The Modifieds are on the car Friday with the 410 Sprint Cars and Saturday, when all three World of Outlaws classes are on the card.