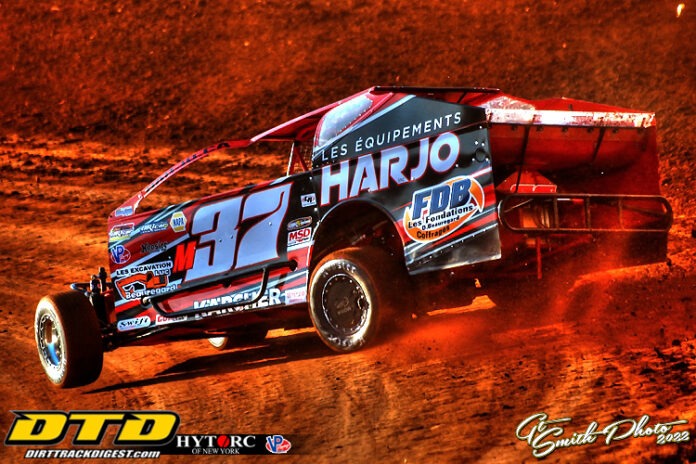 CONCORD, NC – A group of Canadians sang their national anthem in the background as Mathieu Desjardins was being interviewed in Victory Lane Friday night at The Dirt Track at Charlotte.

As for Desjardins, he could barely contain his emotion. Not only did he do right by his countrymen, his childhood dream came to fruition.

The Sorel, Quebec, Canada, native took advantage of Matt Sheppard’s misfortune and held off a charging Tim Fuller to capture the 30-Lap Super DIRTcar Series main event on Night 3 of the World Finals.

“I don’t know, it’s just a dream come true for me,” said Desjardins, who plans to run the full Super DIRTcar Series schedule next season. “When I was a kid, my dream was to race and drive a racecar, and now I’m winning the World Series [Finals]. So, it’s just incredible to me.”

This was an impressive run. Especially when you consider that Desjardins only started racing in 2010 and has spent most of his career in the Sportsman and Small Block Modified ranks.

As for the Big Blocks, Desjardins has somewhere in the neighborhood of 10 starts. But you wouldn’t have known that by the way he kept his composure and car control during Friday night’s main event.

Desjardins led the first 13 circuits before Modified kingpin Matt Sheppard took control of the event. A solid second-place run looked like the final outcome, as Sheppard drove away and let the rest of the field sit.

The race changed on Lap 20, when Sheppard slowed with a broken crank trigger. That put Desjardins out front, a mere 11 laps from his first career Super DIRTcar Series victory.

“I was just like, well, what do you do,” Desjardins said. “Well, I didn’t understand what was going on. After that, I was like, ‘OK, he broke.’

“I just had to be consistent. I saw Timmy [Fuller] on the bottom, but it wasn’t my groove. I had to stay confident, and that’s it.”

Fuller threw everything at Desjardins, sliding through the bottom and middle grooves. Lap after lap, Desjardins was up to the challenge and was able to pull ahead on the exit of the corners to maintain the lead.

The last lap was the most difficult of them all. Fuller was lurking, and Desjardins was on the cusp of scoring an upset win over a field that was stacked with the best the Dirt Modified division had to offer.

Desjardins finished off the march. And when he got back to the pit area, he was met by an ecstatic crew, plenty of smiles, beer, and a well-deserved celebration with family and friends.

“I’m learning everyday here with the best,” Desjardins, 36, said. “The setup is pretty much the same between a Small Block and Big Block Modified. It’s really the driving. I was nervous, but I was concentrating.

“I don’t have the words … it’s crazy to have all of Quebec and family behind me. They sing the national anthem for me, give me beers. Wow, it’s just crazy. It’s unbelievable. It was crazy all night.”

Sheppard took the lead from Mathieu Desjardins on Lap 14 and was poised to run away to another zip code for an easy win. That changed on Lap 20, when a broken crank trigger ended any chance of victory. He was credited with a 28th-place finish.

WILLIAMSON’S MISFORTUNE: Mat Williamson was in line to back up his Thursday Super DIRTcar Series win with another triumph Friday night.

It was looking pretty good early in the night. Williamson was the top qualifier in his group and won the second heat race to make it to the redraw. Unfortunately for the Canadian, he had a motor issue and was forced to go to a back-up car and start at the rear of the A-Main.

When the race went green, Williamson started carving his way through the field. After starting 30th on the grid, he managed to get up to 12th in the final rundown.

TOUGH NIGHT: Brett Hearn’s night got off to a rough start, when he had a motor expire during hot laps for the Super DIRTcar Series. The team decided to scratch for the evening.

The Sussex, N.J., driver is a four-time World Finals, which tops the all-time win list for the November extravaganza. He is one ahead of Matt Sheppard. Hearn is expected to be back in action Saturday evening.