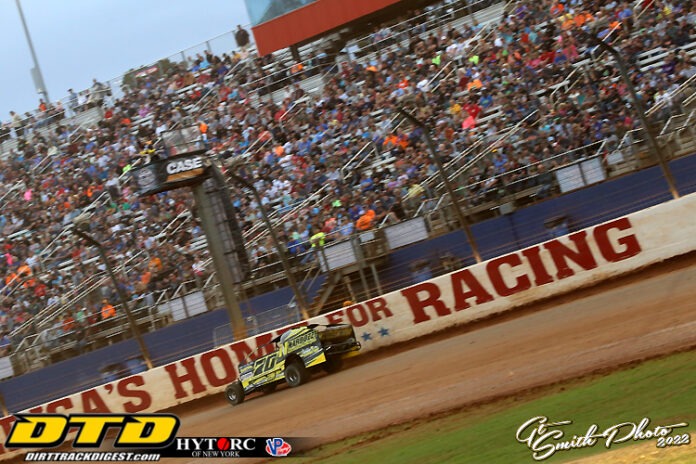 People from around the country that attend the World Finals may not have the same luxury of knowing the Canadian National Anthem as those of us from New York do.  We hear it at every sporting event.

After three days of racing action at The Dirt Track at Charlotte, the diverse crowd got to hear it sung each night after the Super DIRTcar Series feature events.

Mat Williamson won the opener before Mathieu Desjardins won Friday night’s feature.  Williamson capped off the weekend by giving Canadians a sweep with an impressive performance in the 40-lap finale for the Super DIRTcar Series earning his third career win at the World Finals.

“What a win,” said Williamson afterwards.  “I think we probably had the position, had a car that we could have swept down here.  Unfortunately, we hurt something yesterday. We had to unload a backup car.  If you take yesterday out of the equation, we’d probably have four in a row to end the year on big races.  That says a lot about these guys, says a lot about all my teams. It’s just cool to come down here and finally get Buzz a win, and then to win tonight, in that fashion, was even more dramatic.”

Williamson took advantage of a restart late in the race to rocket around Max McLaughlin on the top side.  He made a move earlier in the distance on the bottom only to have that negated by a caution.  Williamson credited Demetrios Drellos with showing him the line around the cushion.  Drellos had Williamson prior to a caution negated that pass as well.

“I think I got to Max’s quarter panel getting off of two,” said Williamson of the initial pass for the lead.  “He was doing everything he had to do to win the race. I don’t blame him. He came up a little bit and that’s where I kind of got the mentality that I was going to throw it into three and four.  He could lift too.  It was just good racing.  Obviously you don’t want to rough a guy up to win, but in these 40-lap races if you come into pits and if you don’t have a bent up body panel afterwards coming from eighth the crew might be upset you didn’t try too hard.

He then added, “Demetrios showed me the outside and luckily the caution came out and then that put us in a position where we could go out there and compete with Max.”

Saturday night puts a wrap on Williamson’s 2022 campaign after 94 races.  He’ll go out on a high note after winning $25,000 last weekend at Georgetown and securing two wins in three races to end to year for the Super DIRTcar Series.

“Georgetown was huge,” he said.  “The thing about Charlotte is we always come down here after racing Fulton, then Oswego, then Orange County, three places that you barely get to full throttle all weekend. So to come down here after Georgetown, which is really fast, and get your mind used to going fast helps. This is just a cool deal.  We are really happy with how things ended up.”

Winning Saturday’s finale at the World Finals would have meant the world to Max McLaughlin.  The North Carolina native would have been able to celebrate with friends and family alike.  Unfortunately he came up one spot short.  McLaughlin took the lead and led most of the race utilizing the bottom and middle lanes of the speedway.  He was going to sink or swim based on that line.

“It was just a case of being the leader and not knowing where the guys were running, where the fast line was at the end,” said McLaughlin.  “I ran that line and it was good enough for me all night.  I got a little high on it on the exit of two there and he showed his nose in three and got into me or whatever. I figured I was just a little high on exit so I drove in and tried to park it on the bottom.  By the time I even got to the center he was already by me on the top.  He said Drellos showed him a nose.  Overall decent night, decent weekend.”

The dejection was evident in the normally upbeat driver after an impressive season that saw him finish in the top five in the final tally of Super DIRTcar Series points.

“We had a good year,” said McLaughlin.  “We definitely had our ups and downs. I know midsummer we sucked pretty bad, but we clicked off a few series wins. I never drove a 358 before and we won at Weedsport a couple weeks ago.  We had a great DIRT Week. We didn’t win every race, but we were damn close. I’m definitely bummed.  As a driver you never forget these nights. So this sucks. It stings.  I’ll be there one day.  So, we just gotta keep working hard and one day we’ll be there.”

Sometimes cautions can help, other times they can hurt a racer.  Demetrios Drellos experienced that Saturday night.  Drellos used a couple of cautions to put himself in position to win.  Caution then fell at the wrong time as Mat Williamson noticed Drellos on the outside of the speedway.  That observation propelled him to the win and Drellos ultimately finished third.

“We could use the cautions up until the last two, they were 100% beneficial,” said Drellos.  “That last caution just killed us.  I can’t blame Matty for Bonsaiing in on the top like that because that’s exactly what I was doing that whole race. I showed him the way and he did what he had to do.  It took away our chance at it, but that was good for him. Yeah, that was bittersweet.”

Drellos has always been solid at The Dirt Track at Charlotte and 2022 was no different.  He came in with speed and showed that he had a car that could be in contention over the three day event.

“We’ve had speed all year whenever we showed up to a race,” said Drellos.  “This year we just really demonstrated that we are a really good car.  I’m just really proud of my team all year.  We persevered through toughness, engine troubles, lack of tires, lack of parts, and we showed that even towards the end of the series, and at the end of the year, we still are one of the strongest cars here.  We went from a mid-pack car to a front of the pack car. We’re really proud of that.”

Anthony Perrego completed his first full season on the Super DIRT Series with a solid sixth place finish in the standings, only three points behind Peter Britten for a top five spot.   It was a year in which he learned a lot with the opportunity to travel all over the Northeast to race.

“It was an up and down year for us,” said Perrego.  “It started off a little rough then we got to some of our tracks that we raced a lot.  We got to go to Albany, we got to top five there and we got a little bit of momentum going. We learned a lot.  We learned that we need a time trial really well because that sets up your whole night.  If you’re a little off when you unload you’re in for a long night.  We learned a lot and hopefully it’ll improve next year.”

Unofficially, Perrego is the highest finishing series rookie, besting Marc Johnson by 11 points.  He had five top five finishes and a total of 10 top 10 finishes on the season, but failed to break into victory lane.

“You always want to win races,” said Perrego.  “We had a really good opportunity here Thursday night and I feel like we had the car to do it. It was kind of me and kind of just like the cards didn’t fall right, but you always want to win races. I’m not really disappointed. We’re gonna finish fifth or sixth in the points in our first year.  Vinny Salerno hasn’t done this in a long time and I never did it. To come out of here the way we did racing against the caliber guys that we do, it’s a good thing.”

Perrego’s season isn’t over just yet as he plans to hit Accord Speedway’s season ending Gobbler.

If you didn’t know who Outlaw Speedway and Land of Legends Raceway regular Alex Payne was before the World Finals, it is probably safe to say you do now.  The teenager put on a show on Friday and Saturday night.  Friday night he drove 21st up to sixth then on Saturday he advanced from 22nd to fifth.  He passed a lot of cars.

“It’s been tough in the heat races and time trials,” said Payne.  “I just got to get better with the heavy stuff.  We have a lot of speed, but when the track blows off we seem to seem to get better.  We got to work on our early run speed, but other than that I’m super happy to come down here and race with these guys. I just wanted to make the show when I got here so to run fifth and sixth is just awesome.”

Payne had some driveline issues in Thursday night’s action.  The team borrowed some parts from Matt Sheppard to make the repairs.

“I’m not sure exactly what happened, but Matt Sheppard helped us out and got us going again,” said Payne.  “We were sound after that and didn’t have any more issues.”

It was Payne’s second foray to the Carolinas for the World Finals.  He credited last year’s track time to helping him this year.

“I think the main thing about last year is that it helped us this year just knowing how hard this place is on tires,” said Payne.  “Other than that, we worked with Bilstein Shocks all week long and got rolling really well.  I can’t thank those guys enough for what they’re doing for us.  We’re the only car here on them and it’s working.”

Payne was impressive as he made the drive forward.  He saved just enough tire to hold on at the end as the 40-lap distance was the longest of the week.  He used the berm on the high-side of the speedway for most of the race to advance.

“I knew that it was gonna be tough in the beginning,” said Payne.  “Everybody’s probably on a hard tire and I just had to keep the car straight and not burn the tire off.  Once we got to the top 10 I thought ‘what do I got to lose?’  I started to use it up.  There’s a pretty nasty curb up there.  The track was awesome, it was racy.  We only had a couple more laps as I started to lose the tire at the end.  Perrego and I had a good race going there.”