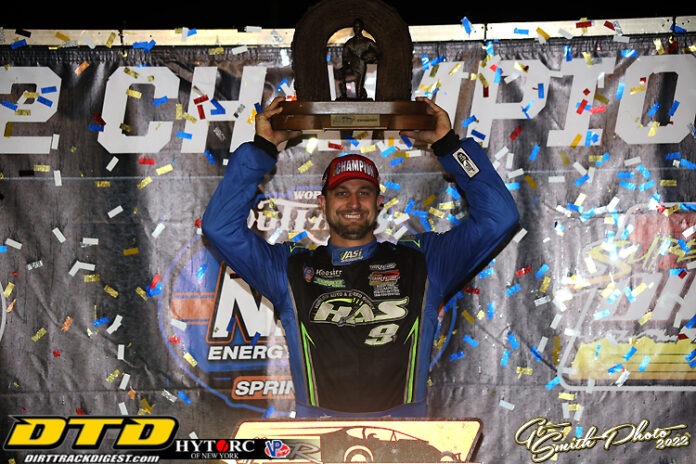 Matt Sheppard’s 2022 season may go down as the greatest season ever by any Modified driver.   There were other drivers who had more wins, but no one has won more big races and won more money than Sheppard has this season.

Sheppard won nearly every high paying show to amass 41 wins while also taking down his ninth career Super DIRTcar Series Championship to go along with both Short Track Super Series Region titles and an Elite Series championship.  He also added track championships at both Utica-Rome Speedway and the Orange County Fair Speedway for good measure.  It was a year for the ages.

Sheppard reflected on the season after locking up the championship on Saturday night at The Dirt Track at Charlotte.

“What a storybook season,” said Sheppard when asked if he ever expected a season like this and could he ever match it again.  “I highly doubt it.  In 2017 we won 41 races, swept Oswego and that was a huge season for us.  We said we’ll never do that again and here we are at 41 races again.  Not only did we sweep Oswego, but we won the Fonda 200, the Fulton 200, Port Royal and the Eastern States 200.

“We never thought we’d be able to do it again and then in 2019 I think we won 36 races.  We won the North and South Regions and the American Racer Cup bonus as well.  That was the year we actually lost the Super DIRTcar Series title.  We lost it right at the very end or we would have just about won everything that year too.  So I don’t know, I would like to think there’s no way in hell we could do it again, but I don’t know. We seem to keep figuring out a way to pull out some monster seasons every year.”

Sheppard had his ninth title with the Super DIRTcar Series wrapped up just by stepping foot on the grounds of The Dirt Track at Charlotte.  It’s been an incredible ride for the Waterloo, N.Y., driver.  He won seven of the 19 races run for the series while earning 13 top fives and 15 top 10 finishes.

“We have nine titles in 13 years I think,” said Sheppard.  “It’s been an incredible run.  We’ve done it with three different race teams.  This race team obviously been super strong. There are just so many great people, supporters, sponsors, friends, family, I mean, it really is a team.   Everybody’s pulling their weight, putting into it everything they can put into it. It takes a lot of stress off of me. It’s just been a potent combination. It really came together this year, for whatever reason.  I don’t know why, but we started clicking and were able to fine tune the cars a little more, a little more and it all worked out.”

Sheppard’s been fortunate over his career to drive for the likes of great car owners like Randy Ross, Jeff Brownell, and Al Heinke, just to name a few.  In 2016 he elected to take a chance on himself and his ability to build a team.  It has paid dividends as he’s built a team that is able to find consistent success year in and year out with the help of great supporters.

“I think we really surprised ourselves right off the get go,” said Sheppard.  “We came out in 2016 and won eight series races and the championship. I think we may have won both nights down here and swept the World Finals and had a phenomenal year right out of the gate.  It was one of my best years ever and that was kind of unexpected to start from scratch and just come out firing as good as we did. Then we came back in ’17 and had a huge season. This deal has been successful right from the get-go.

“The biggest difference over probably the last six, seven years however long this deal has been going on, is the evolution.  We’ve been able to acquire more equipment, been able to go from just running the Super DIRTcar Series with a couple of big-blocks to being able to run the Short Track Super Series and have the cars and engines and everything we need to be able to go after basically whatever we want to go after. I think that was a big difference this year. We’ve definitely gotten a better handle on the cars adjustment wise, but then also having the pieces of the puzzle and all the support behind me it just couldn’t have gone any better really.”

The one blemish on 2022 season was the The World Finals.  Sheppard and company had two very uncharacteristic dnf’s on Friday and Saturday night.  Friday was a part failure on the ignition and Saturday he suffered engine failure.

“We had some bad luck down here two nights in a row,” said Sheppard upon completion of his Super DIRTcar Series title at The Dirt Track at Charlotte.  “I really thought we could have won both of them honestly. Even with the bad luck last night and having to start 12th tonight, when the tires come in that thing came to life. It was really good.

“We’ve had a lot of fortunate luck all season long. It seemed like when we had bad luck this season, it was always in a heat race or at a time early in a race when it didn’t didn’t really matter and we were able to overcome it. I guess it finally caught up with us the last two nights because it seems like when it turns it turns with the racing Gods right now. They’re definitely were on our side all summer and they’re not on our side right now because we’ve had a couple of really fast race cars and nothing to show for it.”

Sheppard now looks to Texas and Lousianna as he needs to win one in the next five nights of action with the Short Track Super Series Cajun Region to get his career best wins total.