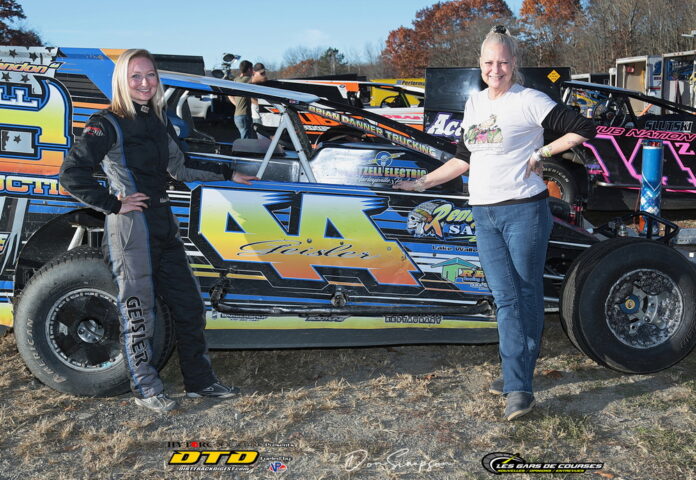 You occasionally come across a racer that piques your curiosity, and Aleia Geisler is one of those competitors for me.

I first learned about Aleia after reading about her victory at her hometown track of Five Mile Point in 2018. Like thousands of racers each week who set out to get that win at their local track, Aleia Geisler is among this group. But that night, back in August of 2018, she fulfilled that dream and won. 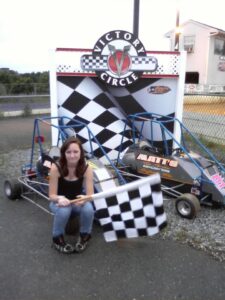 In recent times, it has been different story as she focused on trying to continue racing despite the loss of her father and mentor last year due to an incident that fundamentally altered everything.

However, to relate this narrative in its entirety, you must travel back around 17 years to when Aleia was only 10 years old. Like many in the sport, Aleia Geisler Racing is a small homegrown team, which for the past started on a whim of an idea from her dad Ray Geisler

It was back in 2004 when Ray asked his daughter Aleia if she would like to race Quarter Midgets. Aleia, who at the time thought they might have something to do with her dad’s passion for radio-controlled cars at the time. But this was not the case.

Ray Geisler’s passion for racing began years ago when he used to help his uncle Ken Erney. Ray saw the chance to buy a Quarter Midget race car and thought maybe Aleia might want to get into racing. Aleia seized the opportunity as soon as she learned what her father was proposing. 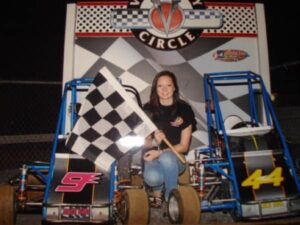 Aleia participated in four seasons of Quarter Midget racing at the close-to-home Keystone Speedway from 2006 to 2010.

Even though Aleia won numerous feature events racing in Quarter Midgets, she still desired more from her racing experience at Keystone Speedway. In order to advance to a higher class, she chose to race at Mahoning Speedway in 2010. 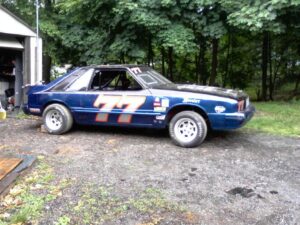 For the next two seasons, Aleia and her dad began campaigning a four-cylinder Ford Mustang at Mahoning Valley Speedway, but this was just not what she was looking for as a racing experience.

In 2012, Aleia made a big step towards her vision of where she wanted to go, with respect to her racing career, and began racing on dirt in the Crate Sportsman Modified division at Bridgeport Speedway. 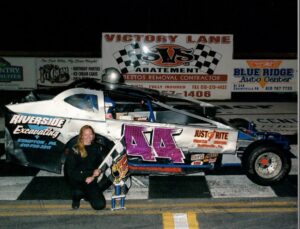 Aleia said, “Moving from a four-cylinder at Mahoning to a Crate at Bridgeport was a very fun experience. I was excited because Doug Hoffman had so much faith in me, he thought I would be good on dirt. “

However, things did not go as planned, and late in the season, Aleia and her father were back competing in the Modified division on the asphalt at Mahoning Speedway. 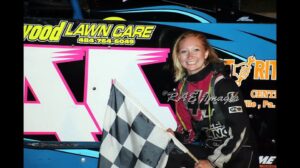 The team continued to race at Mahoning for the next four seasons, and along that journey, Aleia won several feature races.

“Switching back from a 5/8-mile dirt track to a 1/4-mile asphalt track, still in a dirt car, was a very difficult transition. I remember going out for warm-ups and not having any idea where to run on the track,” Aleia explained. “But after four years of running on asphalt, I was more than eager to get back to dirt. I just missed it. I have more fun racing on dirt.”

Aleia’s thoughts kept looping back to the allure of dirt-track racing. As a result, in 2017, Aleia, her dad, and her mom participated in a race, this time at the fabled Five Mile Point Speedway just outside of Binghamton, New York. 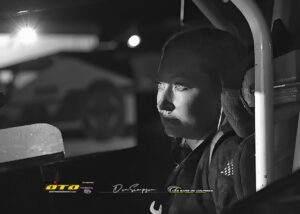 After competing in her first full season of racing on dirt, Aleia took home Rookie of the Year at her home track, Five Mile Point Speedway. She would also place eighth in the race for the track championship, an incredible result for her first year competing in the Modified division.

But history would be made in 2018—not just because Aleia won her maiden Modified feature race at Five Mile Point Speedway, but also because she became the first woman to do so in the track’s 68-year history. 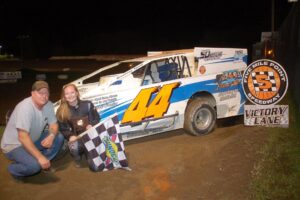 She had a difficult year in 2019 that tried her resolve in many ways, yet she persisted in moving forward and picked up her second feature win in the Modified division at Five Mile Point Speedway.

Then COVID hit, and the 2020 season looked very much in doubt, with most tracks running under restrictions or a modified schedule. Her home track of Five Mile Point did not host the Modified division for this very reason.

Aleia and her dad set their eyes on Penn-Can Speedway as the promoter pressed on with a full season of racing regardless of COVID. Overall, racing at Penn-Can in 2020 was a successful season, given Aleia competed against a weekly field of close to thirty cars. She placed 10th in the overall final points standings. 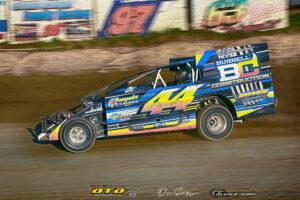 For 2021 Aleia was back racing at her home track at Five Mile Point, but this season would test her to the core. It would only be a 12th-in-points finish that year for Aleia, but it was the sudden loss of her father Ray Geisler. Ray passed away unexpectedly in a two-car crash during the Thanksgiving weekend, aged 54. The family was devastated.

Aleia lost not only her father but also her mentor, who taught her everything she needed to know about racing cars. He was also her biggest cheerleader and fan besides her mom, always there for her on and off the track.

Reading some of Ray’s past posts, I see that he, like his wife, was so proud of his daughter as she worked her way through college, while racing on the weekends, and then graduated with a degree in early childhood education. 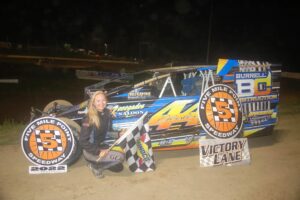 This was a lonely time, as she did not know where to turn. She would spend countless hours in the race shop remembering all the good times she and her dad spent working on the cars or just chatting with passers by who came over to see what was going on.

This young woman dug deep in her soul and decided to press on with her racing in 2022, even though it was going to be tough not only emotionally but also financially.

“That first race this year was hard, not having my dad there,” Aleia explained. “Not seeing him beside the track watching me was tough.”

Out of her eleven starts this season, Aleia persevered and had her finest season on dirt, with three podium places and six top-ten finishes.

The highlight of this year, as well as her 17 years of racing, came in the very final points race at this legendary track, which is now permanently closed.

She won the main event, ensuring a happy ending for her late father, whom she deeply missed. She also solidified her place in history as the only woman to win a Modified Feature in the track’s 72-year history.

Joni, Aleia’s mom, explained, “I think she’s an amazing driver with a great head on her shoulders. I’m a very proud mama bear. It was a very tough season without her father, but she did it!! She did it for her dad!! She won one more for him. I’m her biggest fan and will continue to support her every step of the way.” 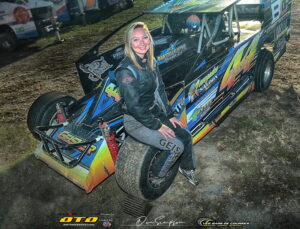 The following night, Saturday, October 28, would host the final race at this historic speedway. But this would not be Aleia Geisler’s night, as brake failure forced her to withdraw from the event.

Nonetheless, Aleia had a dream season considering the circumstances, and I am sure she has made her dad proud once again.

“This season was the best one I had at Five Mile Point, and I learned more this season than I have in any other. I hate to see any racetrack close, especially one where, as a female driver, I feel I accomplished a great deal. I’m going to miss everything about that place,” expressed Aleia.

“Many people were rooting for me to succeed,” Aleia explained. “I discovered courage and resolve inside myself I thought I never had.”

For me, it was bittersweet to finally meet Aleia as I had tried to cover her race night several times over the season to no avail. But luck would have it, I got the chance on the closing night of the speedway. I saw how feisty and determined this young woman is to succeed. Despite everything she had to cope with, she was warm and upbeat.

It was an honor to cover her race that night, and I can’t help but think this sport is lucky to have a racer like her. Aleia Geisler is within its ranks as small teams like hers who persevere are the backbone of the sport