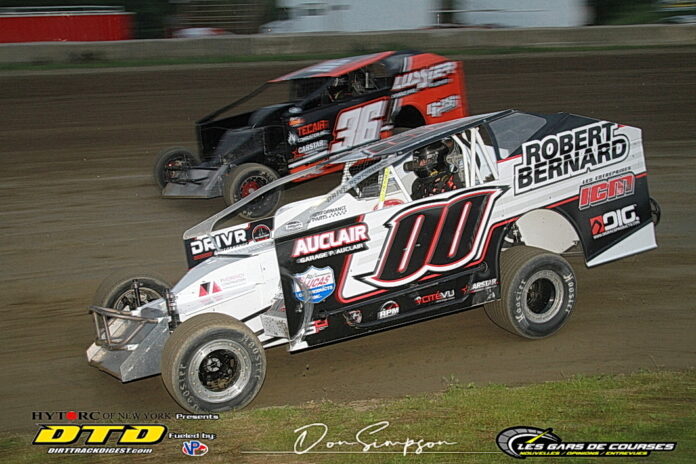 Donovan Lussier, who just completed his his first full season of Sportsman Modified competition, has drawn a lot of attention this season due to his skill behind the wheel.

In 2020, Donovan advanced from the Slingshot class to the Sportsman division, however, he only participated in a small number of events that year. 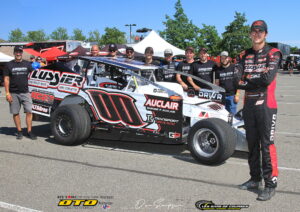 Again, Donovan only participated in a limited number of races in 2021, with the exception of the GP3R in Trois-Rivières., which was a road course on asphalt.

With just over 30 races under his belt, in the Sportsman Modified division, Donovan decided to go full-time in 2022, with over 40 events on the schedule in one season.

The road leading to this season’s challenge for Donovan began with competing in Slingshots in 2014. This would be just one of the stages outlined and agreed upon by Donovan and his father, Dominic Lussier. 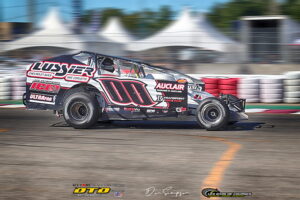 It would be a step-by-step process that would unfold over the next eight years, but the process would take a slight turn in 2019 when Donovan was given the opportunity to crew and stay with legendary driver Brett Hearn.

The 2019 season was Hearn’s final full-time season as a driver, and with the opportunity to learn from a lifetime of experience, Donovan traded his role as a driver for a crewman.

Donovan explained, “I was very lucky to have the chance to work for Brett Hearn, met a bunch of nice people, and learned a lot about the cars with one of the biggest teams in Dirt Motorsport. It’s definitely one great experience that everyone should get to live.”

It was time for Donovan to start racing full-time in 2022. After all the experiences he had over the previous several years, including being a member of Brett Hearn’s team, assisting buddy and fellow competitor William Racine, along with driving his own Sportsman Modified, it was the perfect time to make the leap into full-time racing.

Two thousand twenty-two was a great season overall for Donovan, but the season started off on a tough note with a big crash at the Autodrome Granby. Donovan would be sidelined due to concussion protocol, plus the car was a total write-off. Besides the early season setback, Donovan would race with consistency for the rest of the season 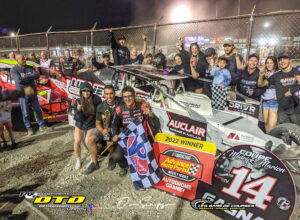 Donovan captured nine podium finishes, along with 13 top-five and 25 top-ten finishes through the season. The highlight of the season, though, was his first victory in the Sportsman division in front of a crowded grandstand at the Autodrome Granby.

In the battle for the track championships at Donovan’s local tracks, he would finish 4th at both RPM, and at the Autodrome Drummond. He would also finish in a respectable 5th place at the Autodrome Granby.

Donovan said, “I had it above my expectations. I learned it the hard way with a difficult first half of the season, but after that, it went the right way and I scored my first win, which I’m very proud of. I am very proud of the progression of my driving and even more of my knowledge about these cars. I’m looking forward to a bigger 2023.” 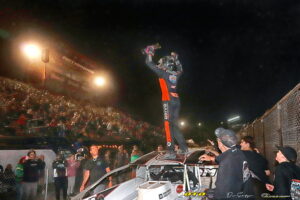 Without a doubt, Donovan is still learning, but thanks to his successful race strategy this season, things are coming together. In contrast to many drivers, Donovan is capable of fabricating bodywork, setting up chassis, replacing engines, and replacing the front clip of a chassis all by himself.

But this season Donovan incorporated his younger brother Matheo to help as part of the crew, which was a great experience with both learning to work together for the best outlook for the team. 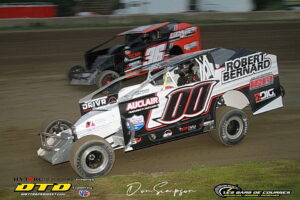 Donovan is determined and focused on his racing career, and as a result, this young racer may not be far from prominence.

His dad Dominic reflected on this past season when said, “I can tell you that I am proud of my son and the evolution he made in the 2022 season. We came from a season where our goal was to enter the top ten, wherein the second half of 2022, we were chasing the podium. I am also proud of his younger brother Matheo, as he is only 15 but has gained a lot of knowledge and experience during this season. They are working hard together, preparing cars and equipment to chase our best season and result in 2023.”

The future seems bright for this young man, as Donovan is developing as a driver each time he sits behind the wheel. He is a hard worker who takes pride in his meticulous work ethic, a recipe for a champion.