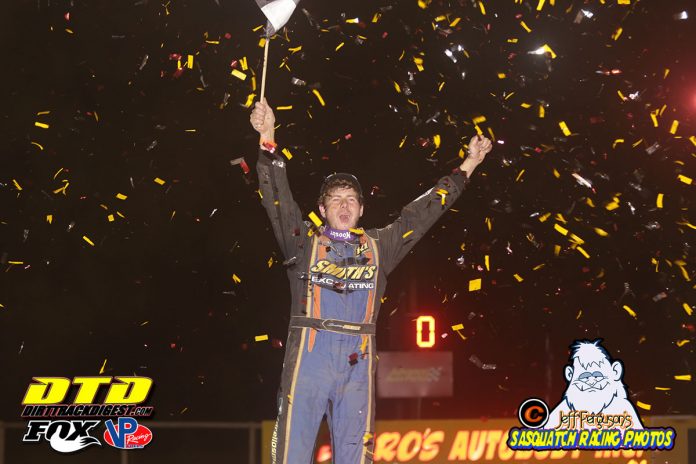 We arrived in Daytona Beach Shores on Sunday, New Year’s Day and will be settling into our digs and getting some rest.  The trip was uneventful but still tiring for us senior citizens.

First on our racing card in Florida will be Volusia Speedway Park for the Sunshine Nationals, January 18-21 when Northeast Modified young gun, Demetrios Drellos of Queensbury will try his hand at racing with the Late Models for the second time since the close of the big-block Modified season in the Northeast.

Drellos participated in the Battle of Barberville in December, his first time in a 602 Late Model, and was fastest in opening night practice.  He did not qualify as well, but was able to finish seventh in the 30-lap feature.

Drellos said that with the experience he and his team should be able to come back with a more aggressive approach to race with the DIRTcar Pro Late Models.  The Sunshine Nationals will bring many more cars and Drellos said there will be many heavy hitters in action and he thinks if they can just make the shows that will be good for his team.

On New’s Day, Airborne Park Speedway in Plattsburgh had a $5,000 to win, 100-lap Enduro and Richie Turner of Highgate, Vt. went home with the big prize.  Placing second was Rick Stiles of Dekalb Jct., NY and in third was Shawn Fountain of Plattsburgh, NY.  Second and third paid, $1000 and $500 respectively.

The Halmar Friesen Racing, NASCAR Truck Series team announced this past week that for six races on the schedule the team will carry the Ferris Mower sponsorship.  And in addition to carrying the Ferris name for the six races the No. 52 truck will also carry a memorial for Bill Shea, former Utica-Rome owner/promoter and long time executive with Ferris Mowers and a dedicated supporter of racing in the Northeast.  Shea passed away this past fall.  Ferris will also be an associate sponsor on one of Friesen’s No. 44 dirt Modifieds for the season.

Other news from social media: Lebanon Valley regular, Brian Berger is preparing a car to run at the DIRTcar Nationals at Volusia in February for the Super DIRTcar Series.

Being in Daytona Beach we are anticipating the race teams coming in for the Rolex 24 Hours at Daytona at the end of the month.

According to a story in the Daytona News Journal, news out of Daytona for the Rolex, are  a team based out of Italy, Iron Lynx, a sports car team, announced that one of its Lamborghini entries will be piloted by an all-female team of drivers.  Sara Body (Belgium), Rahel Frey (Switzerland), Michelle Gatting (Denmark)and Doriane Pin (France) drive the No. 83 Lamborghini Huracan GT# EV02 in the GTD Class. This year’s Rolex 24 is scheduled for January 27-28 at Daytona International Speedway.

Local Modified star Marc Johnson of Guilderland is preparing for his trip to Volusia Speedway in February for the DIRTcar Nationals, February 15-18, 2023 when the Super DIRTcar Series will take to the track.

In six starts previously at Volusia during the DIRTcar National, Johnson has earned one top five finish, during last year’s fourth event of the Florida series.  Johnson is definite about his plans for the Florida trip, his 2023 plans are still in progress.  Marc still has plans to race weekly at Albany-Saratoga and Lebanon Valley with his eye on winning the track title at those tracks.