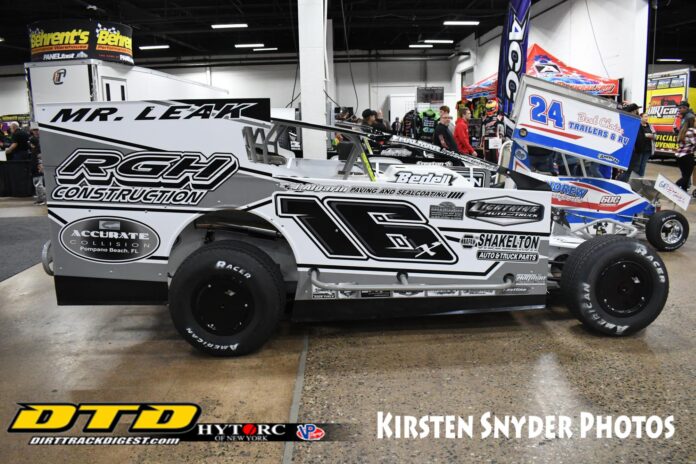 Wurtsboro, N.Y., Modified driver Danny Creeden entered over 80 races in 2022. As the 2023 season approaches, Creeden does not expect to match his 2022 starts but is still bracing up for a busy year ahead.

“Last year we did a total of 82 races and I guarantee you it won’t be that many again,” joked Creeden. “It looked like a lot on paper because I think we ran a total of 32 races just at Middletown alone because of running the big-block and small-block on the same night so that is where the big number came from so it wasn’t 82 separate nights of racing.”

“We are a small team compared to some of these other teams, but we are getting there,” explained Creeden. “I mean, we will never be a big team, but we have the right components now. The car I have here at the Motorsports show is the first brand new car I have ever had. Everything in it is brand new, the motor was built for the end of last year and has a total of five races on it starting with the Fonda 200. I was happy where we were last year, obviously it would have been nice to have more wins but when we look down through it, we were top five in the Deyo North series and top ten in the Elite series. We won a qualifier; I mean we were there. I always joke that we were a thorn in their side but we need a little bit more to be up where they are but we’ll never be like Matt (Sheppard) or some of the others. Those guys are good and are professionals, I am not and still work 50 hours a week. All in all, we were super happy with our year. Dave from Accurate Collision in Florida was ecstatic, Joe (Infante) from Precision, Mr.  Leak were all happy with how the season went.”

Creeden’s off season will be a short one as the team plans on making the trip to Lakeview Speedway for their series race from Feb 2nd to 4th. From there the team will head south to Florida for the Sunshine Swing at All-Tech Speedway that runs from Feb 7th to 11th. After that the team will take a few days off and get ready to head to Volusia Speedway Park for the DIRTCar Nationals.

“We plan to leave on Feb 1st to head south to Lakeview Speedway,” said Creeden. “The car we have here at the show is our South Carolina / All-Tech car. The big block motor is getting done and I will go pick that motor up and put that in the car and after that we just have to body that car up and we are ready to go.”

As for where the team will race once the northern tracks start to open is still up in the air. Friday nights are all set with Creeden returning back to race at The Accord Speedway where he was track champion last season. Where the team will show up on Saturday nights is yet to be determined, Orange County Fair Speedway just put out their schedule last Thursday with both big blocks and small blocks racing once a month so the No. 16 team has yet to make a decision.

“We are still in a holding pattern for Saturday nights,” explained Creeden. “It is up to the boss man (Chris Larson), I want to see if he is still involved and what he wants us to do and then we will make a decision from there, hopefully we’ll have an answer when we get back from Florida. It will be back to Accord on Friday night’s; it is just too close to us to not race there. I just joked with Ronnie (Afton Motorsports Park promoter Ron Ford) a little bit ago that he kind of screwed me up with going to Afton on Friday’s but Ronnie switched to Saturdays so it is back to Accord.”

With five wins in 2022, the team looks to improve on that number but knows that will be tough with the caliber of the competition out there.

“If I could get 10 to 12 wins this year I would be super happy, I am almost at 100 career wins and if I get there I’ll retire,” joked Creeden. “It is hard to get 10 wins in a year anymore. Look, not to sound arrogant and cocky but the Southern Tier tracks we were always geared up for. We had the equipment and maybe just a little bit better with our motor package but to keep up with what we are doing now we need to step up our program to race with those guys like Matt, Mat and Stewie. When I got fourth last year at Fonda in the Firecracker race in July, you might have thought I had won a million dollars because I was so happy that night. We never seem to go good there and at Utica but last year I was right there in the top five. We finished second to (Ryan) Godown at Port Royal in the qualifying race and I was ecstatic again. I used to think we didn’t belong there but now I do thing we belong and that is a testament to our race team.”

“I needed to change my style of racing as well, racing on the STSS with the caliber of drivers being very different. I calmed down by realizing that I didn’t have to pounce on lap one to get a win. Racing those short tracks teaches you those bad habits. Accord is basically full contact just because you are so fast there and they block you in. Someone told me it is like flying fighter jets in an arena and you just rip around that place and get bad habits. Racing on the road with guys like Matt and Stew, you watch them and they just poke around and pick and choose their battles and it took me a little bit longer to figure that out and race the car and not wreck it.”

For any questions and comments, I can be contacted by email at dirtracefan25@hotmail.com or on Twitter @dirtracefan25.