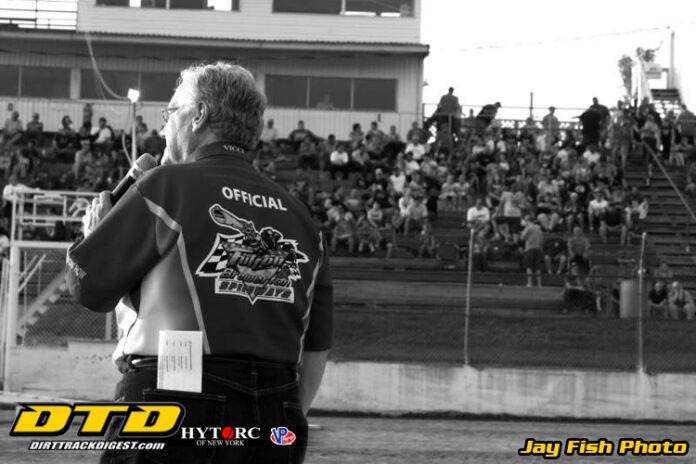 During the past few weeks sports fans have watched announcers get through rough, awkward moments where they couldn’t really get much more information. When Buffalo Bills safety Damar Hamlin went down with a cardiac issue and was receiving CPR for a lengthy time on the field the announcers were caught having to talk, but having little information other than what they were seeing (and that wasn’t easy because the Bills and Bengals provided a wall around the fallen player.

Many racing announcers watched as their ESPN counterparts were trying to get through. They had gone from a sports event to a news story. Anyone who handles a microphone and has been involved in a tragedy knows exactly what they were going through.

Last Wednesday at the Chili Bowl, Ashton Torgerson actually flew out of his car as it flipped. Announcers that could see everything that happened, how the first responders reacted, but had to fill a tremendous amount of time by talking, but not actually saying the driver had left the cockpit.

Dirt Track Digest reached out to several well-known announcers to inquire about their response in the time of on track difficulties.

Shane Andrews, Paul Szmal, Mike Mallett and Chris Moore were more than willing to share their thoughts and experiences.

Chris Moore, Short Track Super Series co-announcer as well as Utica-Rome and Fonda announcer, was doing the Chili Bowl for the first time and his shift was in the infield when the accident occurred.

He told DTD, “Wednesday was very difficult because of the shock of it. You almost couldn’t believe what you saw even though it had just happened right in front of me being in the infield in turn three.”

Continuing he explained, “From there I was just trying to get some idea of what was going on while also staying out of the way of the safety workers, obviously. While we couldn’t give the full extent of any possible injuries, for obvious reasons, we needed to be able to tell people something which I was able to do once I found out he was awake and talking to officials. Besides that, there’s nothing we can say in that situation other than he’s going to the hospital to get the care he needs.”

Death and injuries are  part of auto racing. The possibility is always there, but isn’t mentioned.

For announcers there is that moment when it hits that the right words need to be uttered.

Super DIRTcar Series veteran announcers and “The Voice” at numerous tracks throughout the Northeast including Weedsport, Fulton, Brewerton, Utica-Rome, and probably more than anyone could imagine, has faced the stressful moments of finding those right words.

Shane told Dirt Track Digest, “Yes, I have been announcing when someone has died. A Victoria 200 weekend when Mod Lite driver Doug Cooper died and I was announcing the night of the Tony Stewart/Kevin Ward incident at the Land of Legends.”

When asked to summarize what goes through your mind when you are aware of a situation and can’t say it, Shane said, “I know I have to stay calm. It is important to show calmness in spite of the situation in order to keep everyone else calm. You have to stay focused and present just the facts. You can’t speculate or assume anything at that point.”

Continuing, he said, “As far as how it impacts me I really don’t think about it until it is over. It’s more of a reaction depending on the severity of the situation and what happened impacts me differently, especially if you know the people that are involved. Through my years of announcing I’ve gotten to know a lot of racers and it would impact me differently depending on my relationship with that racer.”

In conclusion he noted, “I’ve gone through some serious stuff that has happened on the race track and I hope I never have to go through it again.”

Paul Szmal has been around for decades calling races at a variety of tracks.

He reflected about some of the difficult moments he has had.

On July 2, 1997 there was a DIRT event and North County Sportsman driver Kevin Fleming died in an accident on the backstretch at the New York State Fairgrounds.

Paul was there and looking back he told DTD, “We (Bill Foley and myself) were there together doing live radio for a station in Geneva. I think that is one of the hardest things that you have to do. As a general rule I don’t share information from medical. It’s basically a case of a driver being treated, we wish them well and move on. I know I wouldn’t have wanted to have been Joe Buck or Troy Aikman shoes on Monday (Night Football).”

Continuing on Fleming’s death, Paul said, “You (Foley) and I talked once the news was given to us and decided not to tell a nearby radio crew who were doing it for a Syracuse station. We got on the air and mentioned the driver had been injured and that’s all we knew and went on. We called the Modified race that night with the full knowledge that Kevin had died. For me personally it was one of the more difficult things I have had to do in my career.”

In conclusion, he explained, “When the Kevin Fleming crash happened you (Foley) and I did a very straight forward professional call of the Modified race.”

He also faced a situation at the Brewerton Speedway and when it was over the reflection was slightly different than Syracuse.

Paul said, “Doug (Elkins) and I were announcing at Brewerton when Dean Hubbs had his crash. We did not know that he had had a cardiac event behind the wheel. Even though Dean took a hit in the driver’s door it wasn’t a massive one. When the Medflight chopper landed at the track we knew things were very serious, but didn’t find out that Dean had died until the following day. Looking back on it if we had known the situation that night I think we would have conducted ourselves differently.

“Not knowing the severity of Dean’s injuries Doug and I went one doing our usual cut up routine and we would have tempered back a little had we known otherwise, ”said Szmal.

Paul concluded, “I think in his day and age you have to be extremely careful of what you say, how you say it and now you conduct yourself on the microphone after a situation like that as there are far more critical ears listening now than there were years ago.”

Mallett, a former announcer for Fonda, Empire Super Sprint, Orange County, Utica-Rome and still does some Super DIRTcar Series shows when needed, said, “Unfortunately I’ve been involved several of these situations both as a public relations person and an announcer.  It’s always difficult.

“I was PR person for Afton when Carl “Skip” Pabis passed away and I was a young announcer when John Scarborough was involved in a terrible accident at Fonda.  He was still in the car when it when it caught on fire.

Continuing, he said, “It was probably one of the scariest situations I’ve ever been in.  Thankfully he was able to get up, but when he did his hands and arms were on fire.  I wasn’t really prepared to handle that. No one had ever taught me what to do in a case like this.”

He added, “Afterwards I talked with Paul Szmal and Shane Andrews to get some advice.  I’m thankful for the help they gave me.  They told to just stay calm and report that safety officials are doing their job and if I have any more information I can share it will be passed along.  Like most, I hope to never have to go through it again.”

I have been on both sides of the story as an announcer and a fan.

My wife and I sat in the Vegas grandstands after that massive Indy car wreck that killed Dan Wheldon.

I know how the fans felt in Cincinnati when the Bills player went down. You don’t know anything. You wait, wait and wait some more for a word. I got most of my information as I called back to New York and reached out to my Brewerton-Fulton announcing partner Adam Buchanan and my son for updates which were coming over the television.

On the other side, my first night as a regular announcer at Oswego I went to the accident scene where A.J. Michaels died in a Supermodified crash. I got off the truck, approached the car, opened the mic and said, ‘A.J.’s eyes are looking straight ahead’. We got back to our spot in the pits and the radio crackled ‘Code (something)’. I asked safety crew member Gary Richardson what he meant and he said ‘he died.’

I’ve never forgotten those words, looking at A.J. in the cockpit, watching his wife try to get to the car and signaling to his crew to keep her away.

As an announcer I used to strive to provide all the information I could to the fans. However, while some announcers will say ‘he’s okay’ while not knowing, I want to know the facts before I say anything. When you know a driver has passed you simply have to continue to call the races in the same professional manner you always have.

Local racing announcers, for the most part, are professional even though they might not do it for a living. They entertain and inform. They know the drivers, crew members and families which puts them closer to people than is recommended. However, they seem to find the words at the most inopportune situations.

No one taught them what to say when tragedy occurs.

They just find the words.