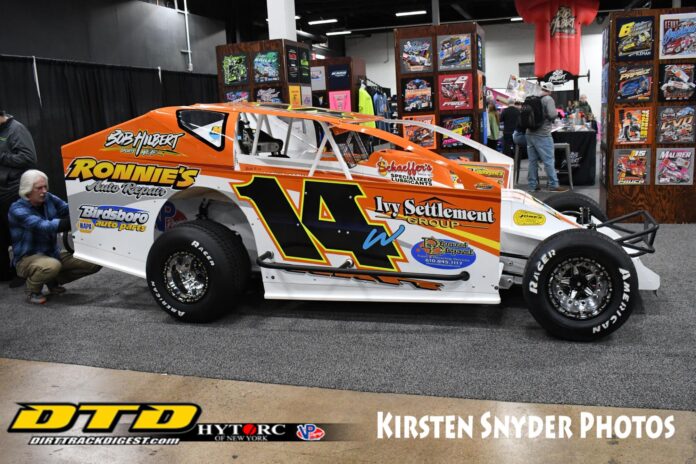 Despite living less that 10 minutes from Grandview Speedway, Ryan Watt has bypassed the Bechtelsville, PA dirt oval on his way to Bridgeport Speedway for many years. In 2023, the Boyertown, PA native along with his son Logan will call Grandview Speedway their Saturday night home. It will be a change of pace for Watt who is excited to be racing weekly with his son. Grandview is unfamiliar to Watt who has a total of six modified wins at the track.

“We are excited to announce that we will headed to Grandview Speedway on Saturday nights this year,” said Watt during a free moment at yesterdays Motorsports Racecar and Trade Show. “Logan will be able to run the Sportsman class there and I will run the Modified class so that will surely keep us busy. It is nothing against Bridgeport, the main reason was to that Logan, and I can run together. Last year Logan was only 13 years old and with Grandview being a NASCAR sanctioned track he wasn’t allowed to run due to their insurance regulations and rules. Now that he has turned 14 years old, he can race there, and I would rather have him race somewhere weekly on Saturday nights.

Watt will not leave Bridgeport altogether there as he will be there as much as possible for their traveling series races and other special events.

“I will continue to race at some of the specials at Bridgeport,” mentioned Watt. “Unfortunately, Bridgeport is not an option yet for Logan due to his age and hopefully we can get him approved to be able to race in the STSS series races this year in New Jersey. But for both of us to race on the same night and only be eight minutes from our house to go to Grandview will definitely be a lot better for everyone.

With Georgetown Speedway now also running under the NASCAR banner, it creates a situation now for the Watts Friday night plans. The original plan was for Logan to race his Crate 602 weekly at Big Diamond Speedway with Ryan running some of the bigger paying modified shows. As of last night, Ryan wasn’t sure what their plans might be.

“Honestly, I haven’t had a chance to think a whole lot of it,” explained Watt. “I kind of have to see how it all plays out. The plan originally was for Logan to run Big Diamond regularly with him also running Grandview with me and I would most likely to some Georgetown races. Maybe we end up racing a little less at Big Diamond and some more at Georgetown but who knows yet. The tough part for us is the drive there. Big Diamond is not that bad for us on a Friday night because of the time they start. I can work a full day and Logan can go to school all day and still have enough time to get to the track and with Georgetown, I have to leave work early and pull Logan out of school early which is tough to have to on a regular basis.”

Other plans for the Watt family include the schedule Ryan has ran for most of the past years.

“Both Logan and I plan on running the STSS South series, commented Watt. “I will run the modified division and Logan will run the Crate 602 division. We will continue to filter in some of the other specials in the are like the Thunder on the Hill races.”

“Logan did really good at the 76er running in the top ten for most of the race,” mentioned Watt. “At the Coalcracker he did really well. He didn’t have best luck and wasn’t able to qualify but I thought he did good. At Georgetown late last year, he did good and beat me in the consi. In the feature he was ahead of me until I got back by him. I think him running a modified once in a while helped him in running his crate. At Georgetown with him running the modified the night before, when he ran the crate feature he was unbelievable. The line he was running was so smooth and the way he was charging into the corners from being used to running the modified the night before.”

Of course to be able to run as much as the Watts plan on running, you need to have the equipment to do so.

“We are starting out this year with two fresh new Troyer chassis for myself,” explained Watt. “I will use one to follow the STSS series and one for Grandview. We still have a Bicknell which has my big block in it to run on some of the Super DirtCar Series races or wherever we want to run a big block at. For Logan we still have “Stitch” which has all been redone and looks like a new car again. That car will be for his Crate races and we still have the Bicknell car that he drove last year in the 358 races. We redid that car so it looks like his Crate car.”

“With us also going to Grandview, we were able to pick up a couple of new local sponsors that wanted to get onboard when they heard we were running there along with some extra crew guys so it will be nice having some new faces around to help out and with us having two cars there every Saturday night that will be a big help. Some of them have known Logan for years and have seen what he has been doing and they feel confident we will have a good year.”

For any questions or comments, I can be contacted by email at dirtracefan25@hotmail.com or on Twitter @dirtracefan25.