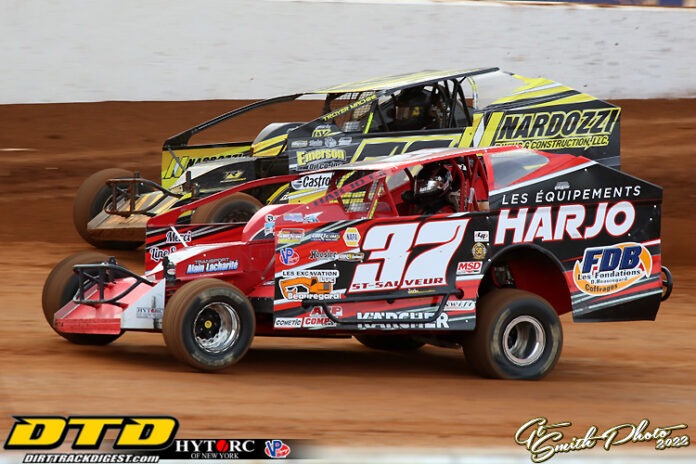 Coming off a highly successful 2022 Super DIRTCar season which saw Matt Sheppard once again show his superiority in winning the title. Series director Dean Reynolds looks to keep up the momentum the series showed last year.

“We are super excited to get this season going this year,” said Reynolds on Saturday at the SDS series booth during the Pioneer Pole Buildings Motorsports and Trade Show. We are looking to have 15 of the 16 platinum drivers return this year and we might have an influx of four or five new ones coming aboard. I can’t release any names yet because we are still talking but we hope to get those names out soon. Overall, I think we are looking pretty good. My perfect scenario would be to have about 18 or 19 drivers follow the series. We started out with 18 last year and finished with 16 after Alex (Yankowski) and Mike (Gular) were forced to drop off so it is good when you do come down to Bridgeport or Big Diamond and you can tell the promoter that I will be bringing almost 20 cars guaranteed because the signed the contracts  and have to be there.”

The SDS released their schedule a couple of weeks ago but in recent days have added dates at Albany-Saratoga Speedway, Airborne Speedway and Orange County Fair Speedways to bring the total of SDS point races to 24.

“When we released the schedule, I knew we were going to have a couple of TBA’s because we wanted to do the Albany-Saratoga and Airborne swing,” mentioned Reynolds. “We wanted to do a back to back up there and it was just a matter of finding a date that would work for everybody and I think we found that a Tuesday-Wednesday combination that works. Lyle (A-S promoter Lyle Devore) as always had a successful end of spring early summer race but we wanted to have Airborne back with it. Mike Perrotte has done a great job up at Airborne, he brought it some 358 and big block races last year and they went very well. I even went up to one of them and I think Airborne is ready to have big blocks again. We will sanction the 358 races up there also and then on Thursday we announced the Sunday May 7th race at the Orange County Fair Speedway date so now I think we are done with the schedule.”

After three years of the SDS not going to Canada due to the COVID-19 pandemic, 2023 will see the series return.

“We are really looking forward to going back to Canada this year after not being able to for the past three years,” explained Reynolds. “We will be heading for three races all at once so the teams will only have to cross the border once and I think they like that. Having three dates with two of them at Autodrome Drummond is something I think they are all looking forward to.”

Of course, the SDS kicks off in a little over three weeks with the annual sojourn to Volusia Speedway Park for the 2023 DIRTCar Nationals. The DIRTCar Nationals are non-point events but it gives the racers a chance to get their season going with some winter racing as well as a little vacation.

“We are excited about going to Volusia again this year, the teams seem excited with the new purse increase,” said Reynolds.  “I think are car counts will be in the low 40’s, we had 36 last year which was very good but the early indications are saying we should be over 40 this year. You know you don’t have to be vaccinated anymore to cross the border and I know there will be about five or six teams from Quebec that will be there and then we have Jessica Power and Ryan Arbuthnot from Ontario coming down and that’s just from what I heard and I haven’t even talked to most of our platinum guys yet. I think they like the four day format and with us still paying the same total purse that we paid for the five days last year has a lot of teams interested. Watching the World of Outlaws Late Models their last night, the track seems to be a great shape and that can only help.”

I myself who attends Big Diamond Speedway on a weekly basis is looking forward to having the SDS return to the Minersville, PA oval after last year’s successful show.

“Jake (Big Diamond Promoter Jake Smulley) has been great and when he turned around and told me that he didn’t get rich but was able to make some money last year on a rain date was great,” mentioned Reynolds. “We did try to see if we could do a follow up with maybe Port Royal or Grandview but we just couldn’t make it work so we will use Wednesday as a rain date. Talking to our teams, they told me that they enjoyed it. We had 34 cars and not being in a Hoosier area I thought that was very good. It was a good race, and the track was awesome and we just cannot wait to get back there this summer. The track had multi grooves and I don’t know if it the difference between the Hoosiers and the American Racer tires because I had heard it sometimes can be bottom dominant there but in the last chance races and the feature they were able to race all over the place. The heats at any track tend to be different because the track is new and usually still a little wet.”

Another switch this season on the SDS will be the Bridgeport Motorsports Park race which has generally been held on a Tuesday night switching to a Sunday date this year on April, 23rd.

“One of the keys is to schedule smartly to keep the guys on the tour,” commented Reynolds. “It is lot of a balance and my guys seems to be very happy with having Bridgeport on a Sunday this year. Doug (Bridgeport owner and promoter Doug Rose) called me and asked me about doing a Sunday because midweeks are a hit and miss for me and I would like to try it on a Sunday this year. So, I said absolutely, let’s do it. So, of the 16 or 18 platinum guys, there are only about four that are full-time racers and the rest all of have jobs so by doing a Sunday they don’t have to take a day off to travel to the track and we did the same thing with Orange County.”