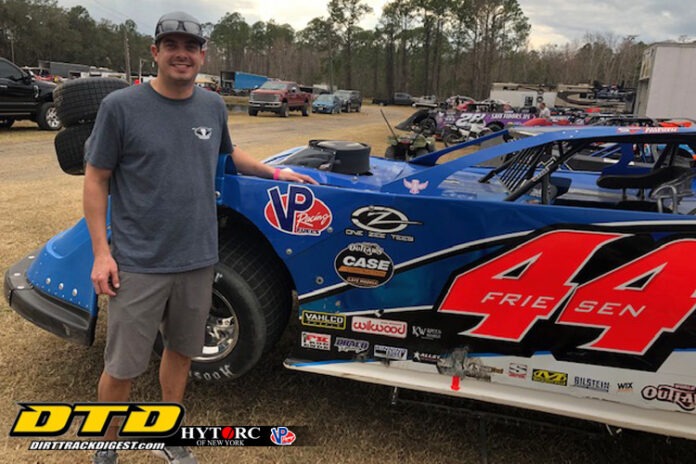 The big news in local racing this week is that Fonda Speedway and Utica-Rome Speedway will become NASCAR sanctioned.  Both New York State tracks are under the promotion of Brett Deyo and will join NASCAR Advance Auto Parts Weekly Series.  Georgetown Speedway, also under Deyo promotion, in Delaware will also join the two local tracks as part of the sanction deal.

According to an announcement by Deyo this past week, he has been looking at the option to sanction with NASCAR for the past couple years.  For Fonda and Utica-Rome many of the same racers run both Friday night at Utica-Rome and Saturday night at Fonda.  This deal will give them an opportunity to run for a state championship, the regional championship and national championship.

Fonda was NASCAR sanctioned at the beginning of weekly racing at the track in 1953 until the early seventies, when Ed Feuz and Jim Gage, Sr., were at the helm of promotion at the Montgomery County track.  NASCAR last sanctioned Utica-Rome in 2016 when Gene Cole was promoting the track.

We spent two nights at the DIRTcar Sunshine Nationals for Late Models, the final night was rained out.  Late Model racing is totally new to us and although there were nearly 150 cars 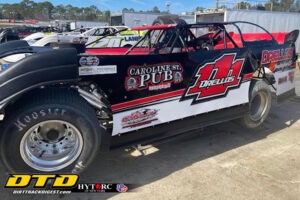 in three divisions at the track we concentrated our efforts on the three Modified racers from the Capital District trying their talents in a Late Model at Volusia Speedway.  Stewart Friesen, Demetrios Drellos and Brock Pinkerous were all on hand for the three day event.

All three did their homework and when it came time for the test in qualifying and feature it was Drellos that was at the top of the class, qualifying fifth in time trials and a second place finish in the 604 Pro Late Model 20-lap feature.  The second night he finished third, putting him fifth in points that would put him in a guaranteed slot for the final nights feature, which we know was rained out and not rescheduled. 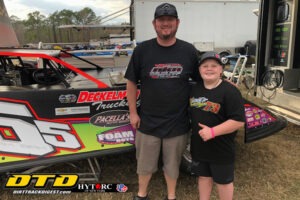 Brock Pinkerous was also running in the 604 Pro Late Models, and was learning the in’s and outs of Late Model racing.  With him as crew chief was racer Russ King, who now has all of Pinkerous’ equipment at his shop in Ohio.  Brock’s appearance in his first night feature ended with a meeting with the outside wall.  On the second night he showed that he too had done his homework and moved up from 16th to a top ten finish.

Stewart Friesen ran with the World of Outlaw Late Models, some of the best in the country in Late Model racing and came up short in qualifying. 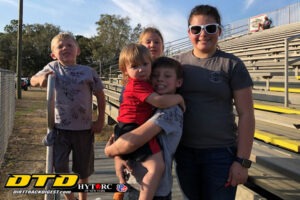 After the drivers meeting we came across the Showers/Hutto family, a group of young racers that were there with David Showers Jr., who was racing in both the 602 and 604 Late Model divisions.  As we spoke with the group we learned that they all race in go-karts and what they referred to as Juice Boxes, which we learned were electric powered go-karts.  The group is a very enthusiastic group of young racers giving us the impression that the future of our sport is healthy.

As we were making our way through the pit area on Friday we came upon a special presentation at the World of Outlaw Late Model drivers meeting. 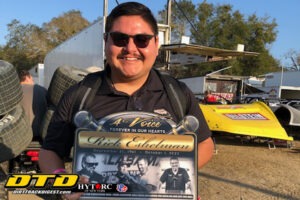 WoO Late Model announcer Ruben Mirales was presented with a special plaque honoring the life of former WoO Late Model Series announcer, Rick Eshelman.  Joe Kelly of Racing with Jesus was the presenter.  Mirales was emotional and said that Rick was more than just a mentor and colleague to him, he was like a dad and it is a dream come true for him to step into the role that Rick held.

We later spoke with Joe and learned that the plaque presented to Ruben was a smaller replica of one designed by Bruce Carroll that was signed by drivers at Rick’s home track, East Alabama Motor Speedway in Phoenix City, Al.  Joe said the smaller plaques were presented to a few special people and friends of Rick. 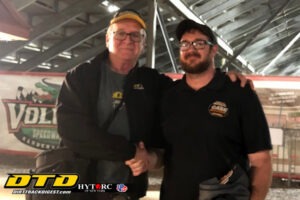 We also ran into WoO Late Model PR director and newly named Super DIRTcar Series announcer, Mike Warren.  Mike will replace “The Voice” Shane Andrews this season and will start when the big block Modifieds are in Volusia for the DIRTcar Nationals in February.

We’ve known Mike for many years and remember sitting in the stands with him at Lebanon Valley.  As a youngster, Mike would do his own version of announcing a race without the aid of a mic.  As time went on he did pit reporting at the Valley. Capital District fans heard him as he was learning his trade as an announcer at Albany-Saratoga and Airborne Park and various series events.  Mike said he is thrilled with the chance to do what he loves.

In other news this week, veteran racer Bob Vedder has posted on Facebook that he is looking for ride in a 358 Modified at Glen Ridge this season.  Anyone interested in teaming up with Vedder can call, 518-231-0253.

News from the Hoyenga racing team, Laudy has picked up another young driver for the coming season.  602 Sportsman driver Cody Clark will move up to the Modified division and drive one of the Hoyenga No. 34 Modifieds.  Cody will race predominantly at Fonda Speedway. Dave Constantino will still be behind the wheel of one of the other Hoyenga Modifieds. Hoyenga’s cars are powered by Billy the Kid and Dan Bedell engines.