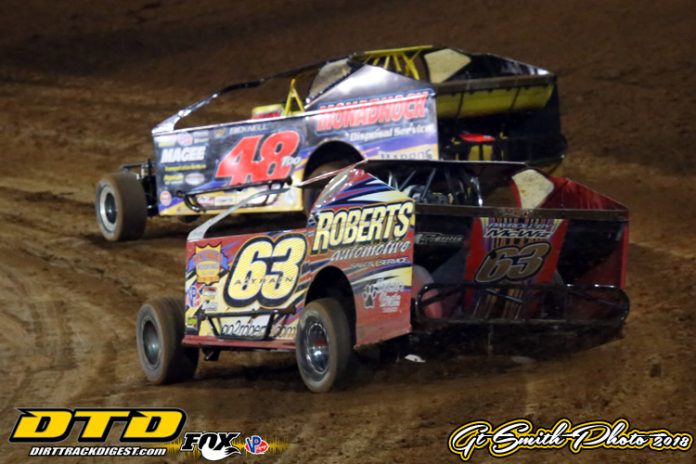 Adam Roberts racing career was at a crossroads as the 2017 racing season had come to an end.

The Watertown N.Y., driver was just one of those local guys who ran the area tracks in his big-block Modified. Brewerton and Fulton Speedways were his stomping grounds. It was a family thing as his wife Sam, who is the daughter of Tim Sears Sr., Tim Sears Jr. and her Uncle Tom all park side-by-side.

So a decision had to be made.  Adam said, “I really liked running two nights a week and running with family. It was great, but when they announced the change I didn’t know what I was going to do.”

His ‘18 plans took a while as he explained, “It was just before Florida in February and it was then and we decided to follow the Super DIRTCar Series this year.”

Sitting in the pits at Charlotte as his “smallest budgeted” team prepped for the last weekend Roberts was sitting tenth in points and knew he was going to be in both features.

Adam said, about being on the tour, “It has been awesome and I’ve learned a lot.  Getting some many more laps under me has helped me as a driver. I’ve ran longer races and I had always hoped we could do this and it became a reality.”

Roberts has seen plenty of new tracks and reflecting on them he said, “The best run I had was at Dundee. I loved Quebec as the Yan Bussiere track is a blast. Those tracks are wide and fast, but the passion of the fans is amazing. I’ve never signed so many autographs. The most difficult track for me was Lebanon Valley as the overall speed was something else.”

He continued, “I was able to finish just about every race this year except for Orange County. I had a crash at Drummond on the last lap.”

Sitting in the top ten in points had to be sort of a surprise, but Adam explained, “I’ve always believed that if you are going to do something you have to do it 100%. Attendance is the key on the tour. We’ve had some good run, but if you look across the statistics you will see all zeros next to my name. We were consistent, finished races and showed up for every shot. And we hope to do it again next year.”

He had a concern when he and his dad, long time racer Steve, decided to venture out on the road.

“Maintenance was a concern, but it really wasn’t any different as we didn’t have to worry as much getting it ready from Wednesday to Friday for two nights of weekend racing, “ said Roberts, “And actually you don’t put as many laps on it. I am really happy how it turned out. Now hopefully we can get a little more help next year. Ken Tibbles Roofing really helps out as do our own businesses Roberts Automotive, Spaulding Contracting, Payroll by McWiz and Glory Construction.”

The Roberts No. 63 is “a ‘16 Bicknell” and according to the driver, “it is the same car we wrecked heavily at Oswego in the first race there, but it has been rebuilt.”

Charlotte has turned out to be a family experience for Adam as he’s joined by his dad Steve along with wife Sam and their two week old daughter Avery Marie. Year and a half old Aria Nichole is at home with other family members.

Monday afternoon the helmet will be exchanged for another helmet as he will don the skates as the assistant hockey coach of his alma mater Immaculate Heart.

However, no matter what he does Roberts says, ”I’ll just keep digging.”