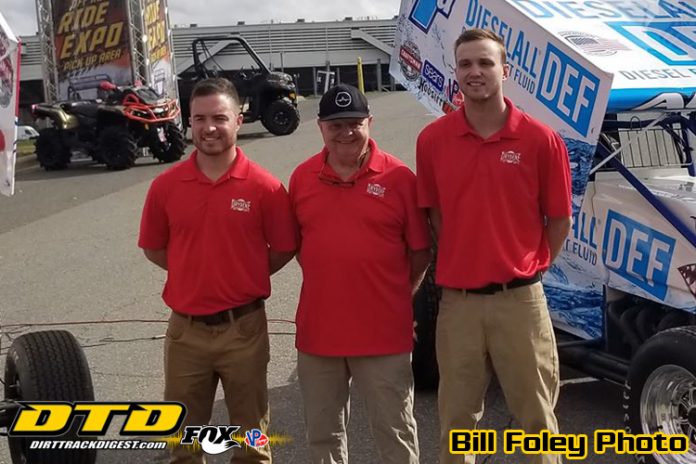 He was known as “Scruffy” and was among the original members of the World of Outlaws.

Today, Bobby Allen continues to have a tremendous presence as the top Sprint teams in the nation transverse the country performing to sold out or near sold out crowds where ever they may go.

Recently, at the World Finals presented by Can-Am, Allen along with his son Jacob and grandson Logan Schuchart were joined by representatives of Drydene as the company not only became the WoO official motor oil and diesel exhaust fuel, but increased support to Allen’s “Shark Racing.”

His daughter Dana said, “This will take a lot of stress off him.”

“Scruffy” sure couldn’t live up to that moniker at this moment as he wore a bright red Drydene golf shirt and slacks. He was so on the mark that during the post press conference photo shoot he stopped the action and walked up to his sponsor to straighten up his collar.

Allen has had a rough road getting to where this team has gotten. He said, “I always figured you just push it out the door and things will fall into place. That is how I’ve always lived. I always figure you just have to see what happens.”

He probably felt that way when Ted Johnson put together a band of racing nomads to begin the World of Outlaw quest in 1978.

Allen known as a member of the “Hanover Gang” out of Pennsylvania has over 275 Sprint car victories, has 30 Outlaw wins, 46 All Star checkers, won the Knoxville Nationals in 1990 and is a member of the National Sprint Car Hall of Fame.

However, it’s hard to believe that he never thought he would be an owner on the tour in 2018.

Looking back at how this quest with his son and grandson began was quite interesting.

Allen said, “You couldn’t make money running locally, but I thought we could race with two cars in one trailer. I figured I could get $1,000 a show, free pit passes and we had an added sponsor who gave me a Sunoco credit card for $17,000 in fuel. We would check to see where Sunoco stations were and many times they couldn’t handle our truck,but we found creative ways to get to the pumps.”

Continuing he said, “I called a motor builder and he had some parts he wasn’t using and I had some stuff that was left over. We had basically two and a half motors.

“It was tough at first as I would tell the boys to run five laps to save the motor so we could move on to the next race,” said Allen.

Last year was loaded with tough times as the hauler broke en route to the season opener at Volusia Speedway Park, but many racing folks stepped up to assist. That hauler situation didn’t help the racing efforts in 2017 and hopefully that type of situation can be averted now.

Continuing he talked of the evolution by saying, “Logan was in a position for some potential point money, but we build our own motors and had some difficulties. He would start good then things went bad with the motor and we’d get fast again.”

Logan has had a decent run this year with wins at Knoxville (non WoO), Fulton and the teams biggest payday…the Ironman. Jacob has been oh so close to winning, but hasn’t gotten there yet.

Dana, Jacob’s sister, talked about the two drivers and said, “Dad owned a place called Speedway 94 and I managed it. When Logan was five-years-old he went down there. I called dad and told him he had to come down and see what was going on. We had leagues and Logan was racing against grown men. At that point I knew he was going to be a racer.”

Talking about her brother she mentioned going on the road was a huge step as “Jacob had never even been in a 410 before. He had some 358 experience, but his first experience was with the Outlaws.”

She remembered, ”I went out to Calistoga (California) the first year and there were all of these fancy rigs. I found dad, the two boys and Dave French in the back on the grass. I wondered how we would ever be able to compete against them. Logan finished, I think, seventh that night. And I knew they were going to do it.”

Bobby Allen lives for racing and being with his son and grandson on the tour is special.

He said, “I just have to teach them how to do this. I’ve had determined drivers and sponsors over the years. I have a passion. I guess you could call it like a gambling addiction to the sport. I don’t gamble, but I’ve borrowed. I haven’t stolen and I always hope to pay it back.”

Allen remembers with emotion Marty Thompson who did so much for his career and racing effort.

The support of Drydene will be a major asset to the team, but Allen said, “I’ve had a lot of people walk up and give me $50 and that means so much to us.”

The Allen family has given so much to racing and the name and legend will live on through Jacob Allen and Logan Schuchart.