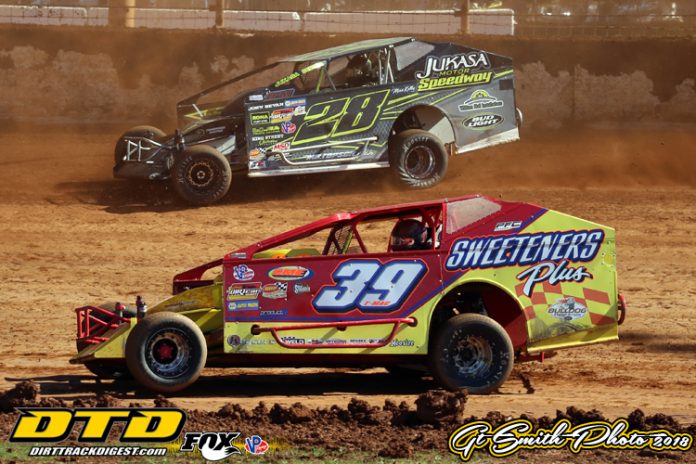 Whenever the name “Tim McCreadie” is blared over a public address system the crowd goes wild.

And for good reason.

McCreadie put on a tremendous show with runner-up finishes in the Super DIRTcar Series 40-lap feature and the World of Outlaw Late Model 50 circuit main event at the World Finals presented by Can-Am.

When asked about the fan reaction the humble McCreadie said, “I like to think it is because they remember my old man (Northeast legend Bob McCredie). To me he is still the best I have ever seen.”

There’s no doubt that McCreadie’s popularity is not only because of his ever present smile, but the way he puts on a show no matter where he goes.

In the Modified event he sat back there in 25th starting position.

He fought his way through the last chance races and even though he was near the back of the 30 car field fans knew they were in for a treat.

Looking back at qualifying T-Mac said, “The car is the same car we’ve been running, but there is a different suspension (coil over) that I’ve never run before. The car was erratic and tight. We spent all weekend trying to get it to drive better. I really think up North the coil over might be better than it is here because here you have speed and traction. The cars just don’t react like the bar stuff did.”

However, when the green for the 40 lap feature came out Tim said, “I’ve done it before. I was in eighth and ninth for a long time, but the last 15 laps it was so much better. Vic (Coffey) and the guys really give me a good car.”

He tried to chase down winner Brett Hearn, but it was to no avail as he came from 25th to just three-tenths of a second behind the winner.

In the Late Model main it was a battle royale with Brandon Sheppard.

McCreadie said, ”I was all over him and I’d catch him, lose him, catch him and lose him again. It was fun, but it would have been more fun the other way around.”

The Late Model effort is a bit of a challenge, but the Lucas Oil Tour provides him with a living.

In regards to the Late Model program he said, “We need to figure out some moves (for next year). I would like to build a partnership. We are a lightly funded team and in fact if there are 12 touring teams out there we are probably the 12th funded.”

When asked about any return to the Northeast Mods Tim said, ”I really can’t afford it. It is just so hard to make money in the Modified. If I could get someone to give me a salary that I could live on to run a Modified it would allow me to be closer to my family and I would like that.”

So for now the Modified fans will get glimpses of McCreadie when he visits from time to time.

However, fans are really enjoying watching him here at the Dirt Track at Charlotte this weekend.