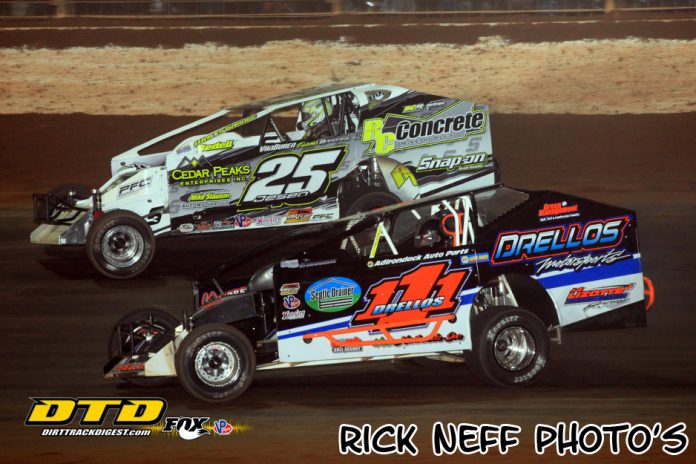 In nine of the top ten positions at the Saturday night Modified portion at the World Finals presented by Can-Am there were actually no surprises.

However, the black with orange number 111 on the side panel, was definitely the only unexpected car sitting in the top five as 21-year-old Demetrios Drellos finished in fifth.

In seven SDS races this year he had never finished even in the top ten until Saturday night.

Drellos said, “It was my best Super DIRTcar Series finished yet. I was definitely out there with good company who had a tremendous amount of experience. The track got slick. There was rubber down and a cushion. I was able to be versatile, found momentum and we just got better as the race wore on.”

Sitting ahead of him at the finish were Tim Fuller, now seven-time SDS champ Matt Shappard, Billy Decker and Brett Hearn.

While chasing Drellos, less than two-tenths of a second behind was Tim McCreadie.

It was a tale of two different stories for the Queensbury, N.Y., driver.

In the first main event early on Saturday afternoon he started 30th and said, ”I was having a good run and on that late restart Max McLaughlin (running toward the front) ran out of gas and we all just piled in. It was just one of those freak racing things.”

That accident left him parked in the outside wall in turn one with heavy front end damage and fortunately the crew had a few hours to make repaired.

Demetrios said, ”We put in a whole new front axle, radius rods, shocks and it got into a rim. Fortunately we were able to swap out the front axle and race tonight. However, we put the car on the asphalt and had to guess where set ups would be. It was by eye and I guess it worked out okay.”

The Dirt Track at Charlotte provides an interesting aspect for Drellos. He said in his approach to racing here, “The surface is just so totally different than anything up North. The way I approached it is that this is the second year we’ve come down.I think in order to be successful here you have to come, be willing to sacrifice a year, then come back the next year and see what you have got.”

The weekend started out less than perfect as the team struggled on Thursday for qualifying.

Drellos explained, “We just had a fuel problem as the car kept stalling out. We changed the fuel pump and made some other adjustments. We wanted it to be right because if you are going to have engine problems at all this is the place they most likely will occur.”

The young Modified driver who sees Albany-Saratoga and Fonda as his stomping grounds might have some different plans for next year.

Drellos,looking ahead, said, “There is a good chance we will be running the tour next year. We really haven’t talked to DIRT yet about a platinum driver status, but I would like to be on the series.”

The Billy the Kid powered Bicknell 111 had a good weekend at Charlotte.  He has run around 10 tour races and next year fans may get to witness another young lion of Modified racing on a regular basis with the Super DIRTcar Series.