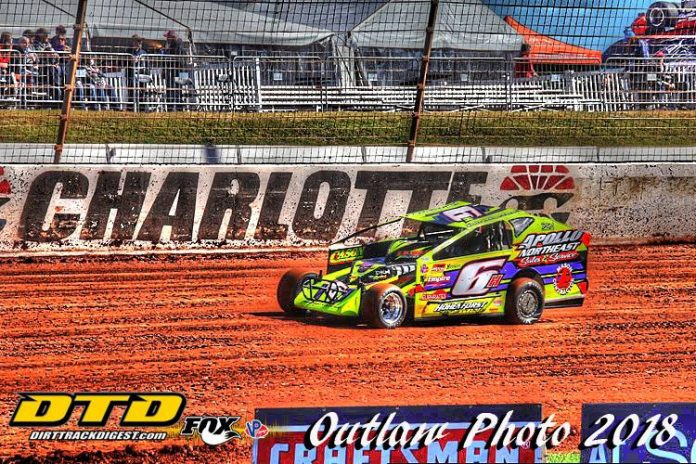 Hohenforst, a regular at the Fonda Speedway in the Capital District of New York, found his way to his first World Finals presented by Can-Am with his girlfriend, a buddy from Virginia and another from home.

He did what so many have tried and failed to do in the past. He made his first trip here and qualified for the Friday night Modified main.

Josh has been here before as he explained, ”Normally we come here on vacation to watch and this year decided to bring the car to give it a shot. This is beautiful and to run before this large of a crowd is awesome.”

The challenge he said, ”Is to try to get the car free and to rotate through the corners without losing time.”

Looking ahead to his expectations he explained, “You really get no track time here. When you unload you have to be good out of the box. You get two hots laps and the track was wet. You can’t make any changes and you’ve got what you’ve got.”

In the Friday night heat race, “we started sixth and finished third while in the second heat we started eighth, got caught up when another car hooked onto me and cut the right rear. We didn’t get a lap and will start scratch in one of the last chance races for Saturday.”

Continuing he said, “I was happy with the run in the first heat, passed cars,and finishing behind Matt Sheppard and Billy Decker. It was nothing to hold down our heads about.”

Looking ahead to the scheduled Friday night feature event Josh said, “I would be happy to just bring it home in one piece and finish in the top ten. I would like to get a good run in the last chance race for Saturday, but with no practice at all I will just have to wing it. It will be tough, but we’ll see if we can get it in.”

In his first feature event in North Carolina he fell back early, but held his own in the middle of the pack. He pitted, came back and at the halfway point was 16th.

He was moving, but the red flag came out for a multi-car pile up in turn one with six laps to go.  On the restart the car sat there.

Josh said, “I think it is the banking here, but I had enough fuel only the pulley system we use wouldn’t pick up fuel and I couldn’t get it restarted.”

So the Charlotte rookie had to settle for a disappointing 20th place finish.

His Saturday didn’t get any better as he just missed qualifying coming up one spot short in the consolation event.