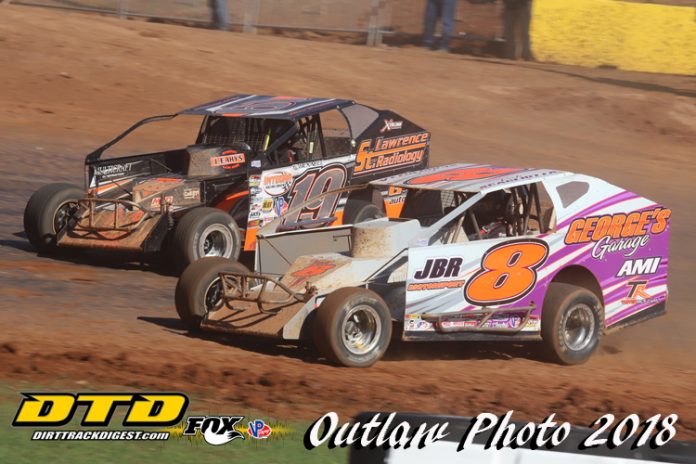 Jerseyite Rich Scagliotta is a loyal follower of the Super DIRTcar Series and in the “Friday” night Modified feature on Saturday afternoon he finished sixth in the 40-lap marathon event.

Starting 27th in the field, and coming off a last chance race to get in, the Bound Brook, N.J., resident was more than happy of how this race played out for him.

Taking a break from getting his car ready for the second last chance event he gladly took time to talk about the race.

Rich said,” It was the best series finish I have had all year and for that matter my best finish ever here. I started behind Tim McCreadie who finished in second place. It was a marathon.”

Continuing he said, “You just have to have patience out there. The car was good and rolling well. It was very good on the bottom so I just stayed there.I was just trying to keep my nose clean.”

Scagliotta has been racing big-block Modifieds for 11 years and got his start in Sportsman racing just two years before the turn of the century.

He’s been a regular runner on the SDS tour the last several seasons.

However, The Dirt Track at Charlotte hasn’t been kind to him.

Explaining he said, “I just have not been very good generally here. Usually I don’t finish.”

Looking at his day he noted, ”In that hot lap session we had the track was weird. It was slippery in hot laps and there was no grip whatsoever. After a couple of laps it got slimey. It wasn’t wet at all. It was almost like they had put down calcium, but not any water. It seemed the calcium pellets were just sitting there. It was weird.”

Scagliotta didn’t fair as well in the second feature event on Saturday, but he’ll long remember the run from 27th to sixth at the World Finals presented by Can Am.