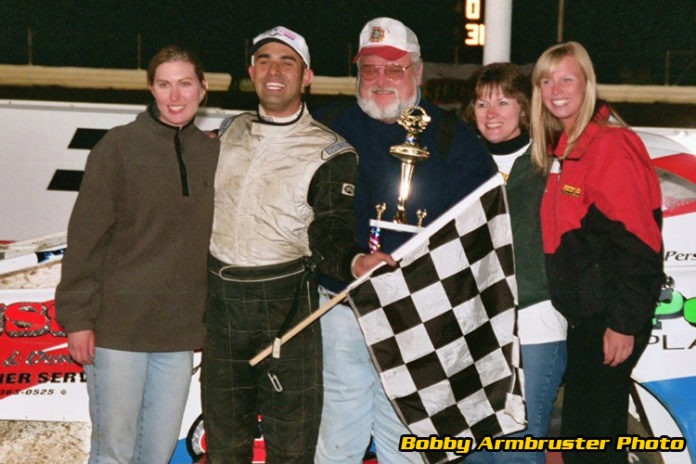 Ron John Koczon was a well liked racer, who after battling cancer for the past five years passed away this week.

It has been a tragic off season with the losses of car owners Jake Marine, Tony Ferraiuolo, Bill Trout, drivers Dave Brown and Ed Ortiz and more.

However, Ron John was a young man who had so much of life left ahead.


Pete has been the  announcer at the New Jersey facility for 23 years as he started there when the dirt was applied to the surface.

Reflecting on the young driver he said, “Ron John won six career Sportsman features, one in 1998 which was our first season, the other five came in 2000 when he won the Sportsman championship.

“In Modifieds, he won five career features between 2004-2012 with his last one coming on May 5 of 2012. He finished in the top ten in points every year between 2005 and 2010. Then after not being in the top ten in 2011, he came back with his best Modified year ever when he finished fourth in the final Mod standings finishing ahead of Billy Pauch Jr. and Dave VanHorn.”

Ron John supported racing outside of just being in the pits.

Pete said, “Ron John was always a fixture at every car show the track would do, or parades or school events etc. He would always make time for everyone, especially the kids. I once asked him if he could stop at a school that my sister-in-law taught at for an event. He showed up with his race car and let every kid sit in it and answered questions for hours.”

Continuing, he noted, “He was known by everyone for his big smile and how friendly he was to everyone. He lived in New Egypt as well as long as I knew him.”

Pete added, “I’ve always referred to him as one of the nicest people I have ever known and anyone who knew him would certainly agree. He left a lasting impression on everyone he touched, including myself, and I know his memory will live on through all of us.”

Ron John Koczon died of Stage 4 Cancer and after being diagnosed he fought for five years.

His surviving family includes his wife Diane and two young children Parker and Kaleigh, his parents and his sister Bonnie Tittle. She is married to Brent Tittle who crew chiefed for Frank Cozze and others including Ron John at one time.

Ron John was one of the nice guys that this sport needs so much of. He was willing to give of himself on the track and off the track to promote racing and always did it with a huge smile on his face.

Editor’s Note: DTD would like to thank Jeff Ahlum, Pete Wortman, Bob Armbruster  and Jim Brown Racing Photography for their assistance in this story.