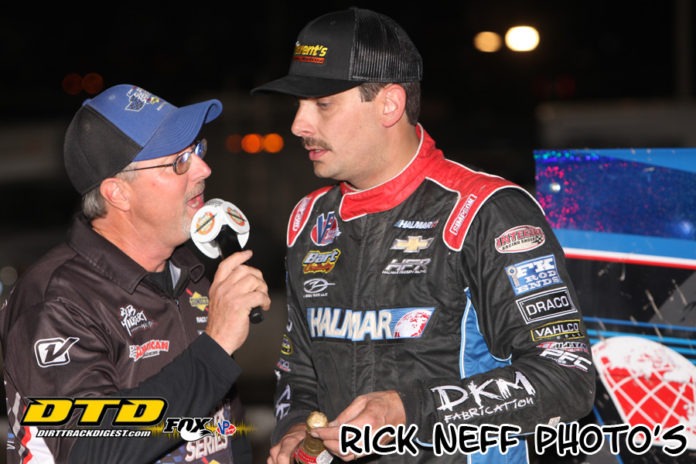 For Central New York fans their announcers are pretty familiar with Shane, Paul and a few others, but in Pennsylvania there is a guy at a legendary race track who only gets to call a few races in the Empire State.

Jeff Ahlum has been around the microphone for nearly 30 years and is one of the best from where he is from.

The Dirt Track Digest series goes Behind the Scenes with the Short Track Super Series announcer.


Jeff Ahlum: “I became involved in racing because my father was a huge race fan and took me to the races at a very young age ( I think he said I was about three or four). He was also a race car owner with his buddies when they were younger back in the 1950’s.

After being a fan for a lot of years, I developed a group of friends that started attending the races when we were old enough to drive and we went three nights every weekend. One of the persons I got to know was Bob Stull who was the flag man at Penn National Speedway and he hooked me up with the video guy to do voice overs on the video tapes back then. After time that lead to my first announcing job a couple years later.”

DTD: What are you doing at the track at this time?

JA: “I have had the opportunity to be the announcer for Brett Deyo’s Short Track Super Series and when Brett made the deal to stream the races live on DTD TV for what is now the second season, I became the announcer for the series on DTD TV.   I have the opportunity to call the races for the people who are at the track, plus all the people who are tuning in at home, where ever that may be. That involves telling them who all is there as far as the drivers for the event and how they are doing throughout the night.”

DTD: What is your favorite part of what you do?

JA: “My favorite part of my announcing job is a two part answer. First of all, I just love giving the line-ups and finishes and calling the races, providing the information to everyone about the drivers participating in the event and how our program will be run that evening. Giving a starting line-up and hearing the fan reaction to the different drivers is really a lot of fun, and it helps to pump energy into the program. Also having a good race to call is a plus and just makes for a great finish to the night.

“Next, is the people that I work with and that I meet each race night. Whether I am at my home tracks or on the series, the people that I work with and for are all great. They all are very serious about the job that we are doing, but at the end of the night, like to relax and have some fun kidding around and discussing the night’s action. They are also good at what they do.

DTD: What is the least favorite job as an announcer?

JA: “My least favorite part of the job is when there is a serious accident and possible injury to a driver, and as the announcer you have to try and explain the situation as best as you can without giving away info that you do not know.”

DTD: Are you a fan and how difficult is it to be a fan?

JA: “I am a great fan of our sport. I still attend races as a fan when I am not announcing However on race nights when announcing, I am just a fan of the races and all of the drivers running that night, hoping for a safe and competitive program. It is not hard to do that because I enjoy a good night of racing.”

DTD: What tracks have you worked at?

JA: “The STSS at Fonda when Stewart Friesen edged Matt Sheppard at the finish on July 3, and to hear the huge roar of the crowd in the grandstand under us over the sound of the cars and the electricity in the crowd afterward. Thunder on the Hill PA Speedweek event from 2017 with Kyle Larson battling with Greg Hodnett for nearly 20 laps of the 35 lap feature, with Larson winning over Hodnett and Kasey Kahne and getting to interview all three afterward.

“Richie Pratt Jr. passing Wade Hendrickson and Danny Johnson BOTH on the last lap to win the season final at Bridgeport in 2010.  Billy Van Pelt out dueling Matt Sheppard for many laps to win his first STSS race in front of his home crowd at Woodhull in a pressure cooker. Having all three divisional features (Mod, Spt, LM) ending in a photo finish in the same night at Grandview, including Mike Gular edging past Brett Kressley off the final turn to win the modified feature. Matt Smith and Whitey Kidd III battling each other over the final laps trying to win the $4000 micro sprint Skyscraper at the Bridgeport 1/4 mile in the first running of the race.”

DTD: The toughest memory you have from announcing?

JA: “The toughest was announcing the race the night we lost Jason Lefler.”

DTD: Why do you keep doing what you are doing?

JA: “I keep doing what I do because it is something that I always wanted to do as a kid, and now that I have been given the opportunity to do all of this announcing, I want to enjoy the time I have as long as I can. Every night is exciting to be at the track and as said before, I just love spending time with all of the great people in racing. Racing has been part of my life all of my life and I just enjoy the time spent at the track.”

JA: “My family was involved. My Dad and his friends owned a car in his younger days and he had a second time as a car owner in the 1980’s with a co-worker. In between we were fans going to the races every weekend.”

DTD: Who influenced you the most?

JA: “My influence as far as racing was Warren Ruffner the announcer at the Reading Fairgrounds. As a kid I used to wonder why the racing programs seemed so much more exciting there than some other places. Soon I realized it was the announcer winding the crowd up with his style and I started paying more attention as to why and learned the difference between track announcers. I tried to follow some of the great things he did and it has worked for me. Also it was a great thrill to be able to work with my idol on a few races near the end of his career and the beginning of mine, that was really cool.”