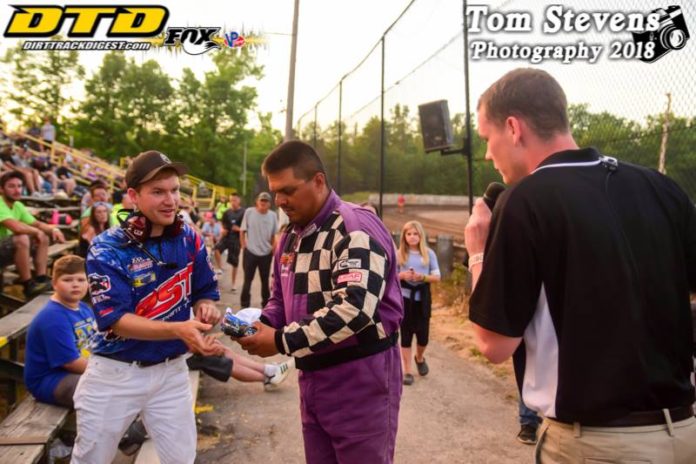 The Dirt Track Digest family is quite varied.

Writers, videographers and photographers provide dirt track fans with a wide variety of stories, videos and pictures from race tracks all over the nation.

Curtis Berleue is one of the members of that “family” and we’d like to have you go Behind the Scenes with him in our latest edition of this exclusive series.

Curtis Berleue: “I have been around racing my whole life. When I was a kid, my family would go to Black Rock Speedway (now Outlaw Speedway) and Woodhull Raceway every week, with occasional trips to other area tracks. I couldn’t get enough of it, and that has continued until today.”

DTD: What do you do for DTD and how did it come about?

CB: “Around 2008 or so, I started taking a camera to the racetrack – just a point and shoot. I enjoyed taking pictures because it was something I could bring home and relive my experience from the weekend all week, until the next weekend when I got to go again.

“In 2013, I decided I wanted to try and take the next step – I had upgraded to a DSLR camera, and wanted to get access to shoot at the track, “for real” so-to-speak. I believe that was around the time DTD had changed hands to Mike Mallett and George Smith, and I sent an email to George asking about shooting for them in the Southern Tier. He was able to get me hooked up with credentials to shoot at McKean County in Smethport, PA, and then Canandaigua and a few other area tracks.

“Since then, I have been the track photographer at Black Rock Speedway, series photographer for the Patriot Sprint Tour and shot many races for DTD as well, contributing all of those photos to DTD and writing a few columns along the way.”

CB: “Honestly, my favorite part is just being able to be involved in the sport I love so deeply. I want to be able to give back to it as much as I can, and I enjoy being able to contribute in any way I can to further dirt track racing however I can, be it working behind the scenes, telling the stories of each night through photos, videos, words, etc.”

CB: “I would have to say my least favorite part, like anyone, is seeing someone get hurt. Nobody wants to see that, and it really hits home when someone you have become friends with is involved in a serious accident.”

CB: “I am absolutely a fan, and will always be a fan first. I just love everything about motorsports. If I wasn’t able to participate in some sort of official capacity every night, I would still be buying my ticket and sitting in the stands each week.”

“In 2016, I started working for the Patriot Sprint Tour and Mike Emhof as the tour photographer. Somewhere along the way, that has morphed into my current role as photographer, web/social media manager, and at track safety personnel.

“Along the way, I have continued to shoot at tracks all over for DTD, including Mansfield Motor Speedway, Williams Grove, Port Royal, Selinsgrove, Volusia Speedway Park, Woodhull Raceway, Outlaw Speedway, Land of Legends Raceway, etc.”

CB: “As a Sprint Car guy, it’s probably fitting that some of my ‘best’ memories have to do with sprint cars. The first is probably when my dad and I started going to races again after a little bit of a hiatus – we were at Black Rock Speedway for an early spring show, and it was the first time I had seen Sprint Cars in quite a few years – I was instantly ‘re’ hooked on them, so-to-speak.

“Another is seeing the World of Outlaws for the first time ever at Rolling Wheels Raceway and seeing Steve Kinser pick up the win.

“Probably one of the coolest for me though was putting together a plaque honoring the 15 years of Patriot Sprint Tour champions, taking it out to the National Sprint Car Hall of Fame in Knoxville, Iowa, and presenting it to Bob Baker for display in the museum, and then to go back the next year and see something I designed and was a part of hanging side by side with all of the other history of our sport – that is cool.”

CB: “Probably my toughest memory in racing to date is being one of the first people on the scene to Davie Franek’s crash at Fonda Speedway last year. I have become good friends with the Franeks and crew, and it certainly was not a good situation – one enough to give anyone nightmares.”

CB: “I think the reason I keep doing it is the same reason everyone does – I love to do it. It gives me something to do away from the ‘real’ world, it is my escape. I would say that at times I’m borderline obsessed with it.”

CB: “Mostly just as fans. My parents and grandparents did crew on a supermodified at Oswego Speedway back in the early 90’s, but as long as I have been alive we have really only been involved as fans.”

CB: “First and foremost my dad, for taking me to the races every week for as long as I can remember – and putting up with my obsession with it.

“Also, there are so many people in the racing industry – Steve Kellogg and Dan Harpell, the folks at DTD, Justin Zoch at Three Wide Media (Flat Out and Dirt Monthly Magazines), and Mike Emhof just to name a few – without their help I certainly wouldn’t be where I am today.”