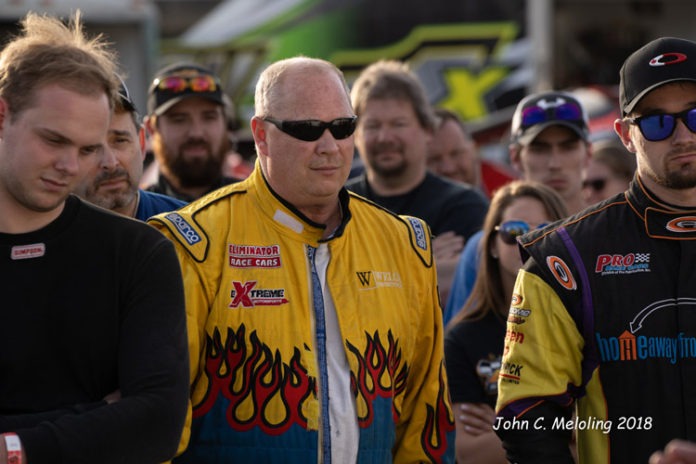 Obituaries are pretty generic, but there is always a desire to know what people are thinking, how they felt about a person or who that person really was.

Who was he and how would his wife like him remembered?

Dirt Track Digest reached out to Allison Brown to see if she wanted to talk about her husband and she graciously responded with heartfelt comments.

As with any person there is always that way you would like to be remembered. 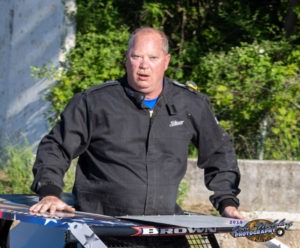 Allison said, “Dave was proud, private, strong, funny and very giving. He would give you his shirt off his back or his last dollar. He plowed everyone’s driveways or fixed whatever was broken without anyone asking. Other racers knew he had multiple spare parts and if they needed something he would drop what he was doing, potentially sacrificing time getting his own car ready to help out other racers. He’d sing and dance up the grocery aisles to make me laugh and embarrass me. He’d try to coach and advise others so they could benefit from his life experiences in relationships, financial or vocational. Sure, he could be gruff and tough on the exterior, but once you got to know him, you would see the real Dave.”

In racing most fans know “Downtown” Dave Brown from his Mod-Lite activity, but he had ventured into the Sportsman division.

Reflecting, his friend Jeff Bushnell said, “He really wanted to move up into the Crate Sportsman. So, the building began. He was so proud and appreciated help from others. He said that he’d never had so many crew members. He was someone who took pride in perfection and said ‘If we are going to do this, let’s do it right.”

Continuing he said, “I will never forget the smile on Dave’s face that first night in Fulton. He was grinning ear to ear. We were looking at each other like “We didn’t win?” then he said to everyone, ‘I am not here to set the world on fire, but to have fun with my friends’. He was all about his friends. If we were all having fun that was all that mattered. That’s how he lived life. Always smiling, having fun and enjoying life.” 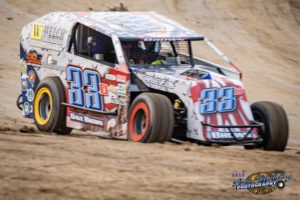 Dave’s cars always seemed to have a red, white and blue them.

He had been an MP in the Army and had been stationed in Central America and Asia.

Allison noted, “Dave was quietly proud about his military and federal service and combined it totaled 25 years. He loved talking and working with other Veterans. Even on his breaks at the VA Hospital you could find him buying a cup of coffee for another Veteran or visiting with elderly Veterans.”

Continuing she explained, “When it came to his race car wrap he didn’t just want to do a good looking color scheme. He wanted to do something that had meaning. Dave wanted to show support for the active military and Veterans and make sure they knew that they were not forgotten. I have heard many people say wraps and pretty cars don’t win races and that’s true. But, Dave was very meticulous and proud of how his equipment looked. This is evident by the fact that before the race night started, either in the pits or home, it was my job to wax the car and get the mud off even though it was about to get dirty.

“Another reason for his military and patriotic graphics is that Dave’s primary sponsor since the beginning of racing, Welch Construction, is a service disable veteran who owned a small business and one of Dave’s past sponsors, Hotsy of New York, is as well,” she noted, “Dave wanted to honor both of those businesses.”

Allison added, “Even though he never said it I think that he also wanted to show support to two family members. Dave’s father Richard was a Korean War veteran and his Uncle Charlie a Vietnam War vet.” 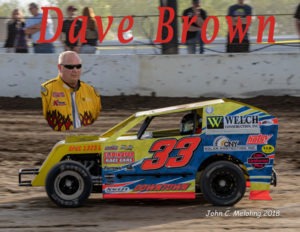 The 33 team was basically Dave and Allison as they were always together in the Mod-Lite pits at Brewerton.

She said, “Our relationship was a true partnership. We really enjoyed each other’s company and spending time together. Dave always said that no matter what, he wanted me to be part of his racing and if I didn’t want to be there he was done with it. He never liked the idea of going off for an evening or weekend without me. Even when I had to travel for work I did my best to work around his racing schedule. We were together through thick and thin, ride or die. We supported each other’s hopes and dreams and racing was one of Dave’s. We respected each other, listened to each other and leaned on each other. We weren’t each other’s ‘better half’, but we were each others other half. We completed and complemented each other. We’re each other’s best friends.”

The couple met in 2006 as Allison said, “We both worked at the Syracuse VA Hospital. Dave was a police officer and I was the manager of the hospital’s cafe and retail store. One of the other police officers dared him to ‘arrest me’ and he put me in handcuffs. Well, he followed me into one of the offices and proceeded to do so in front of several people. I turned all shades of red and hightailed it right out of there as soon as he took the cuffs off. We became fast friends after that and over the years things progressed. Since it was not the first marriage for either of us we didn’t want to make a big fuss over it. Most people didn’t even know we were married. We got married on October 9,2015 at Sandals Antigua with my father and the same police officers and his wife in attendance.”

Dave had the desire to race, but got started late in life.

Allison explained, “He did say that this was something he always wanted to do. However, when he was younger he didn’t have the money or time to do it. When he was a teenager, he was working several jobs or working with his family on their property. As an adult and after he got out of the military he was always working sometimes two or three jobs to try to provide for his family. I probably egged the racing on as I gave him a NASCAR experience for his birthday in 2010. We were actually already going to Las Vegas for a surprise family vacation. The timing was great and he was able to do the experience at the Las Vegas Motor Speedway.”

Continuing she explained, “The class he was in consisted of a group of non English speaking folks who were tourists from Europe. The training session took a long time due to the language barrier. They gave Dave more laps and more freedom on the track. Well, you get on the track and follow a training car. The training car has three lights red for too fast, yellow to speed up and green for just right. Dave’s training car was red from the time he left pit road. The smile on his face was huge when he was done and he was hooked.”

Allison said it was time to go racing and noted, “Dave realized that he had the time and finances. Sometime during those early years he became friends with former Mod-Lite driver Steve Miller. Steve offered to help find a car and offered to help him work on it, give him pointers and such. They found a car in Ohio and went to get it. I had no clue what a Mod Lie was and it looked tiny to me. He was six foot, 215 pounds. He had never got in it, never drove it, just bought it. But he proved me wrong.

“Dave liked being different,” Allison explained, “He was the only one with an Eliminator Mod-Lite in the Northeast. Since Dave had different wraps and schemes every year people thought he got a different car. He just liked to change things up. He only owned two Mod-Lites. The first car he purchased in 2012 was a 2005 Eliminator and the second was as 2015 Eliminator from Eliminator Race Cars and Tracy Fritter in Zanesville, Ohio.”

Looking ahead, she said, “We were planning on moving South in a few years. When that happened he said he would be done with racing. However, he really wanted to try a bigger car before finishing his racing career. He found a HigFab Sportsman out of Albany last January. However, once we got it home we found that it was twisted. He ended up getting a new chassis from HigFab and spent several months putting it together. We started racing it in July. At his last race at Fulton, the drive shaft snapped during the heat and he wasn’t able to make it back out on the track.  His father had just passed away so we decided it was time to end our season, mourn his father and try to wrap up the estate. He was thinking about racing both Mod-Lite and Sportsman in 2020. However he decided it was time to let the Mod-Lite go and focus on the Sportsman. He sold the Mod-Lite to someone in Ohio last October. It was sad to watch it go, but he was excited to focus on the Sportsman going forward.”

However, Dave passed away suddenly and he will be missed.

Dave Brown was 60 years of age and born, raised and lived in Truxton N.Y. for the majority of his life. After getting out of the military he held several jobs including iron worker, welder, truck driver and at one point worked his way up to being one of the top welders at Pall Trinity in Cortland. He worked for six years at the Syracuse VA as a police officer and the next 11 in charge of fabricating hospital and medical equipment at the VA. He retired in 2018.

He was third in points in 2018 and most improved at Brewerton while finishing tenth in 2014 and 2015 in the TUSA International points.

Plans are to bury him in Florida once the travel restrictions are lifted, but Allison noted, “I will be having a celebration of his life over the summer in New York.”

Donations can be made in Dave’s memory to Clear Path for Veterans in Chittenango or another Veteran’s organization of your choice.

Allison acknowledged several people important in their lives as she said, “His pit crew Dan Coots, Steve Miller, Mike Galleotti, Doug Bushnell, Jeff Bushnell and Randy Bushnell we always thought of as more like brothers than friends or pit crew and I thank them so much for everything.”

His friend Jeff Bushnell summarized it best by noting, “I am going to miss his laughter, his kindness, his willingness to help others, his way of making you feel welcomed. Those are the things that I and my boys will take from Dave’s example moving forward. Those night working on the car and building his dream and those nights after the races stopping for ice cream and laughing will always be cherished-living life to the fullest.”