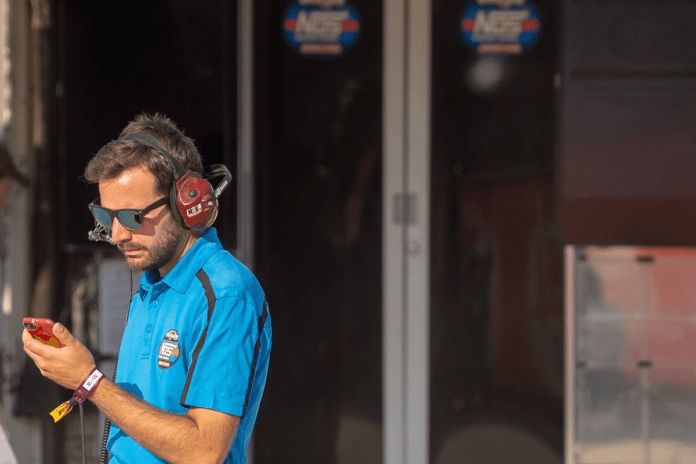 From the sports desk in college and spending time behind the wheel of a Mod Lite in Central New York, Dirt Track Digest’s Behind the Scenes exclusive series would like race fans to get to know Nick Graziano a little bit better.

Nick is one of the younger breed who will keep racing moving forward.

Under his direction the sports publication grew from 20 to 40 pages.

The year after graduating from Oswego he attended Coventry University in Coventry, England for a year to earn his Master’s Degree in Automotive Journalism. It was there where he and his classmates created their own automotive magazine and he had the opportunity to intern with Road & Track.

Nick is the latest to be in the spotlight in Dirt Track Digest exclusive Behind the Scenes series.

Dirt Track Digest: How did you get started in racing?

Nick Graziano: “My dad is a big NASCAR fan and my late grandfather was a big race fan, too. They both influenced my passion for racing. At about 12 years old I started racing microds at the New York State Fairgrounds. From then on, I knew I wanted to work in racing somehow.”

DTD: What are you doing at the track you’re at?

NG: “In January last year I started working for World Racing Group as the Public Relations Coordinator for the World of Outlaws NOS Energy Drink Sprint Car Series, traveling across the country for the Series’ 80+ race schedule.”

DTD: Explain your job as if no one knows what you do.

NG: “I help promote the Sprint Car Series and its events and drivers through press releases, feature stories and the Series’ social media channels. On a typical race day, I promote the event through pictures and videos on social media all day long and during the event. Once racing commences I live tweet all of the action. Once the Feature is completed, I’ll post the results and update the points on WorldofOutlaws.com. I also write the race recap directly after the race – depending on our timetable of when we need to head to the next track, I may be writing it in the command center after the race or in the car while we’re on our way to the next city. While racing is on a hiatus at the moment due to the pandemic, my duties are still the same pretty much the same. The main difference is I’m writing race recaps about our weekly Tuesday night World of Outlaws Sprint Car iRacing Invitational events on DIRTVision.”

NG: “One of the best parts of the job is getting to travel all over the country. I visited about 30 new states last year and got to see and do things I’d probably never get to do otherwise. I went to Las Vegas for the first time. A group of co-workers and myself went snowmobiling in the mountains in Lake Tahoe. I got to visit Indianapolis Motor Speedway, Mount Rushmore, the St. Louis Gateway Arch and the Bonneville Salt Flats, among other cool things we sneak in between trips.”

DTD: What is you least favorite part of the job?

NG: “Working in areas with little to no reception. Never take for granted the benefit of having good reception.”

NG: “I’m definitely a fan and it would be hard to do the job if you’re not one. You’re on the road from March to November, with maybe a handful of weeks that you can get home. With usually two races a weekend, sometimes three, and sometimes a race during the week, too, you’re always on the move, going from hotel to hotel, sometimes only staying there for a few hours of sleep before having to get up and head to the next track. There’s no way you could do that if you weren’t a fan.”

DTD: How many years and what tracks did you work at?

NG: “I never worked at a track before. I’ve raced at a few when I raced Mod Lites for about eight years. I raced weekly a Brewerton Speedway – won the 2014 Mod Lite Stock/Spec Track Championship – and also ran sometimes at Fulton Speedway, Weedsport Speedway, Utica-Rome Speedway, Can-Am Speedway and Evans Mills Speedway when it was a dirt track.”

NG: “One my best memories from my first year with the World of Outlaws is attending the Knoxville Nationals for the first time. It’s incredible to see the entire town turn into a Sprint Car haven. Other than that, the great races, cool trips and shenanigans my co-workers and I get into while on the road – a lot of days at mini golf courses.”

NG: “Knocking on wood there’s nothing I would consider a tough memory.”

NG: “Simply, I enjoy it. I’m very fortunate that it’s one of those jobs that doesn’t always necessarily feel like a job. I enjoy writing and being around race cars and I get that plentiful.”

NG: “No, my dad and grandfather were just race fans. They’re both big into cars, though. My grandfather worked for GM. And my dad owns a mechanic shop, G&V Auto Care in Liverpool, N.Y.”

NG: “It was my parents and grandfather. My grandfather had a shelf of 1/64th scale NASCAR die-cast cars that I always played with when I was young. And my mom and dad took me to races when I was young, bought me a go-kart and supported everything car and racing related I wanted to do.”