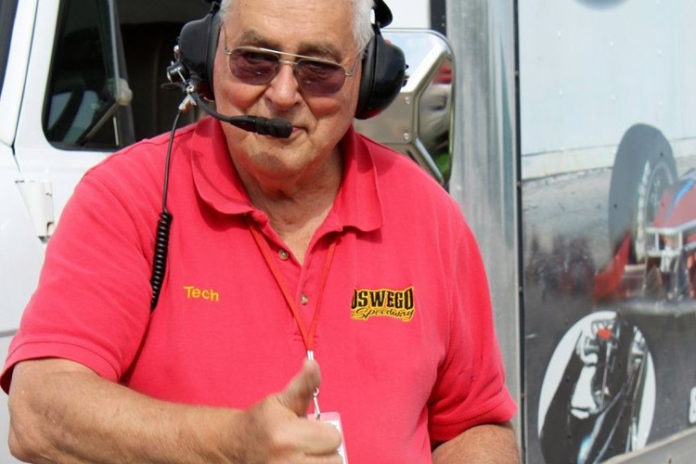 Chico Rhines is one of the Central New York racing pioneers and some of the stories he has can remind fans of a time when the sport was more the wild, wild west.

Rhines finished his career as a flagger at dirt tracks such as Brewerton, Fulton and Utica-Rome, but the early days saw him on asphalt at the D-Shaped Demon and Bub and Vicki Benway’s former paved palace.

Whether asphalt or dirt, Chico has stories to share about those days and he decided to allow Dirt Track Digest to share several.

He started at Brewerton in 1957 in the Flat Head division.


He said, “I drove for many owners, but back then it was Don Brinks who gave me my first full time ride then Paul who owned Paul’s Gulf Station on the South Side of Syracuse.”

Rhines talked about winning his first title, but it came with a bit of controversy.

He said, “I won my first New York State championship in Street Stocks at Mil-Ray Speedway (Fulton) and we had to hire an attorney to get our money because they changed the rules after the race we won. Also you should have seen the cheap trophies we got as they weren’t the originals. They were expecting Kotary to win the race, but I did instead.”

Continuing he provided more insight to the early days and noted, “I was leading the 50 lapper when the lights went out. They had run out of fuel for the generator. I still went on to win.”

Promoters and drivers had some interesting deals back then.

Chico said, “I was leading a feature when Joe Orso spun me out and would have been the first to beat Kotary. We got into a fight on the backstretch after the race and the track offered us $50 apiece to pretend to hate one another.  That started the Rhines-Orso battle and it fueled the crowd as they went crazy and we packed the stands.”

Another familiar name came into play as Chico said, “I drove for Sam Carista after my car owner Don Brinks fell asleep and went off the road rolling over with the race car and died. Sam bought the car and for the whole year all the money we made went to Don’s family.”

Continuing he said, “I met Irv Teller who built me a new car. We won a few races.  Then the car got destroyed. Don LeBeau, who I worked for, bought a Hudson and we won a lot with them and then I drove for Sam Heare and his brother.”

The strangest one had to be the next ride as Chico said, “I drove for a barber shop in Brewerton with Sam Reakes. When we drove in we had to park in the darkest area of the pits as the car had an illegal truck motor in it. My first time I asked if I should go out to win or just go for second, but the guys said go for the win. I lapped everyone, and the tech inspector back then never caught us. We made more money on tear downs then we did to race.“

In his career he chalked up nearly 30 wins, but there was the night he decided to make the switch out of the seat.

Reflecting on that evening, Rhines explained, “I was leading the race when Jack Naum kept running into my back end. He was making me really mad. I looked back to see my car was on fire and the yellow came out. I headed for the pits and we got some bubble gum to patch the gas tank. We went back out, went about four laps and headed to the infield, but in doing so ran into the ambulance. That was when I decided to give it up.”

However, he wasn’t done as “Archie Green offered me the flagging job and to this day I am still involved with tech at Oswego.”

He worked for many Brewerton owners and also flagged at Fulton, Utica-Rome and Evans Mills.

However, there were some of those nights which he can’t forget.

There was one night at Utica-Rome, which could have been tragic, but ended up hilarious.

He said, “I fell off the starter stand at the start of the feature. I always hung out over the railing and that night my foot slipped just as I dropped the green. I am glad that Had in the safety truck saw me fall as he came out on the track stopping the cars as they were winding up. Looking up I saw this little kid standing there laughing at me and then Marcia Wetmore came over the radio laughing. She asked if I could do it again as she missed it. When I got home I couldn’t even get out of the car and sat there honking before my wife finally came out to help me in. Found out later I broke my tailbone.”

At Brewerton one night he stood in the tower and thought something was in the air.

He explained, “A guy from Marcellus owned a septic tank service and he used the truck to put down water. Boy, did it smell and Donnie Wetmore came past holding his nose. It was one of the most awesome track surfaces I’ve ever seen.”

There was also drama at Brewerton as one night a driver was black flagged. He stopped his car in the fourth turn and started walking down the front stretch. When he got to the start-finish line he started to climb the tower toward Chico.

Rhines reflected by saying, “He pulled out a knife and I grabbed his driver’s suit pushing him out over the track.” The driver’s hands and feet were flailing in the air as a near riot ensued with the driver’s fans surrounding the tower.
Moments later the New York State Police, Sheriff vehicles from Onondaga and Oswego County as well as U.S. Border Patrol all swarmed in as upwards to 10 vehicles were kicking up dust from Route 11 to the Speedway entrance.
Fortunately no one was injured.”

Chico did try dirt at Weedsport as he said, “Sam Reakes convinced me to go to Weedsport and I think by the end of the night I owned the cornfield off turn one” as he simply couldn’t keep it on the track.

Turning 82 this year Chico still has the enthusiasm of a young driver when it comes to racing and without his exploits, and many other like him, racing would not be what it is today in Central New York.