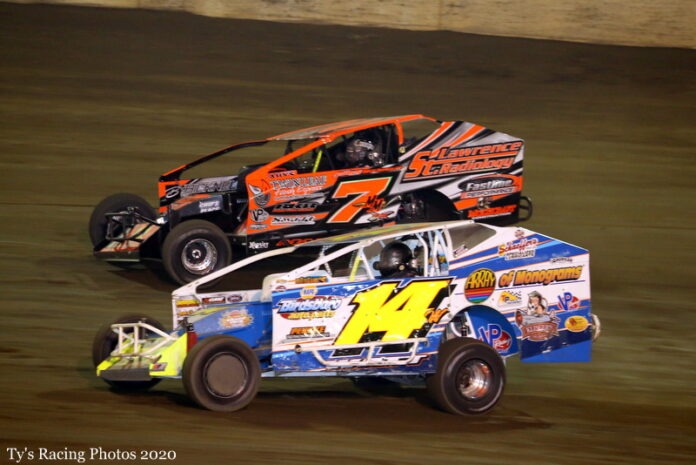 Michael Maresca had a year which saw him win the track titles at Fonda and Can-Am Speedways, but this past Sunday the North Country driver headed to Jersey to compete on the spanking new and totally redesigned Bridgeport Speedway.

Maresca had a long, but satisfying, ride home as he captured the 50-lap feature event over the best that New Jersey and Pennsylvania could offer.

The 2019 Fulton Speedway Outlaw 200 winner spoke exclusively with Dirt Track Digest earlier this week to reflect on his outstanding run.

DTD: What did winning on Sunday at Bridgeport mean to your?

Michael Maresca: “Winning Sunday was good. It was finally good to win a big race this year. We had a great season with some local wins and track championships, but we didn’t have any big wins. So it completed the goals I had set.”

DTD: How did the race progress for you?

Maresca: “The race was good. I started ninth and worked round to puck guys off. About 15 in we had to start throwing sliders to take the momentum. Once I took the lead I knew I could dictate the race and the pace. I tried and maintained the momentum through lapped cars since the closing speeds are so high there.”

DTD: What made you decide to go to Bridgeport as you aren’t exactly a regular there?

Maresca: “Bridgeport is a great track and my kind of style. They were paying good money. It made sense and it was a lot of fun. They treat everyone really good there.”

DTD: The track rules were relatively wide open. What did you run?

DTD: You defeated the best from Jersey and Pennsylvania. What does that mean to you?

Maresca: “It was awesome in my eyes it is a different higher paced style of racing there and those guys are good at playing the chess match. It is a lot like racing at Cornwall with the pace and strategy, but to seal the deal against those guys really made me happy.”

DTD: Talk about the new Bridgeport track, is it as good at it appears? What is good about it and why do you think it is so racy?

Maresca: “The new track is unbelievable. It changes a lot, but there are infinite ways to go around the place fast. It promotes exciting racing with banking and grip changed and you have to be aggressive.”

DTD: How did COVID-19 change your plans for this past year?

Maresca: “COVID didn’t change too much for us really. I just gave us more freedom from being locked into a lot of Saturday with the schedule shortened etc.”

DTD: What were your thoughts about winning the Fonda track title?

Maresca: “Winning the Fonda title for Bill Scoons was a highlight. It was their first one and I couldn’t have been more proud to race for better people. They are the best people in the sport.”

DTD: What do you attribute to your improvement as a driver the past couple of years?

Maresca: “I would say with help from my friends and crew we all stepped up and have done our homework. Russ King helped a lot with how to study the races and play the match and be prepared. Fastline Performance and Penske Shocks and BIcknell have all been really helpful in getting us back on track.”

DTD: Who do you want to thank for the season you had?

Maresca: “I have to thank St. Lawrence Radiology, Fastline Performance, Penske Shocks, Twin Leaf Stores, my crew. Connor Marvin has been a great friend and crew chidh and all the other crew memes week in and week out that showed up not only at the track, but also in the shop. They have been a huge help.”