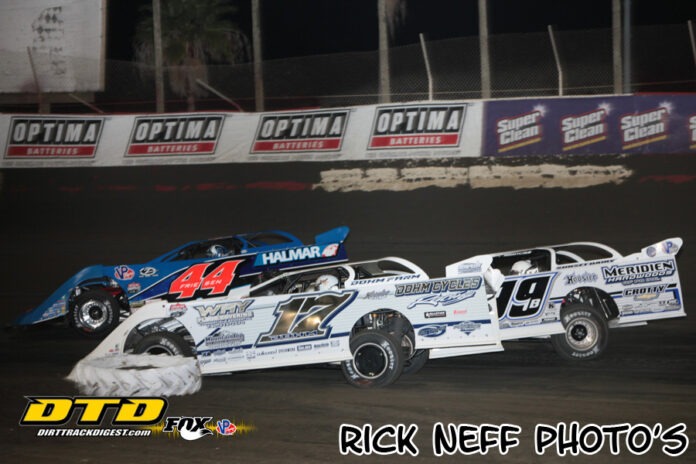 Usually when Stewart Friesen pulls into the pits his expectations are to take home the winner’s share of the purse.

However, as he stood in the East Bay Raceway pits on Monday afternoon his quest was significantly different as with over 70 finely tune cars and late model veterans vying for one of the 24 starting spots in the first night of six, Friesen simply desired to qualify for the main-event.

It would be only his second ever Lucas Oil Late Model Series start and he was coming off a debut at the All Tech Speedway about two and half hours north of East Bay over the weekend.

Stewart was visiting with fans and spending quite of bit of time talking with whomever passed by his hauler as this was the calm before the storm. 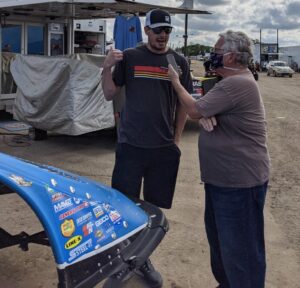 As it turn out, he missed qualifying for the main event by one position, ran competitive in his heat and the 29 car B-Main, which took only two cars, while also running fourth in the Strawberry Dash.

So his quest to climb the Late Model mountain had come a long way in just his second show.

When things were much quieter and as his car sat up on jackstands, he visited with folks under the afternoon sun Stew talked with Dirt Track Digest about his latest quest

Dirt Track Digest: You had your first exposure to a Late Model at All Tech the other night. What were your thoughts?

Stewart Friesen: “Oh wow,  learned a lot and had a blast and figured we’d keep on racing. We were just going to hang around the next couple of days and figured we’d come down here to East Bay before the Short Track Super Series starts and wanted to make some lap here at East Bay.”

DTD: How about your racing at All Tech. It seemed you had a good heat, but got caught up with a bad restart?

SF: “Yeah, definitely. I had a good restart and got up into a qualifying spot briefly. I was feeling pretty excited and feeling pretty good up to that point and just spun my tires on the restart as I just didn’t clean them up enough. I feel back and thought maybe we might have a chance in the B Main, but I slipped up in one and two on the first lap and (Rick) Eckert and a bunch of guys got by and that was pretty much it.. I learned a lot and had a lot of fun thanks to Halmar and all the product sponsors that came on board, Wildwood Brakes, Vahlco  Wheels. It was pretty cool to put this deal together and thanks to the guys at Longhorn and its fun. We will race tonight and see what happens and go from there.”

SF: “It’s different as different as the Sprint car stuff was to the Modified. This is a totally different planet. It’s been cool to experience and see how these guys do it. I am able to talk to some of them. I am pretty lucky and fortunate to be in this position and just having fun with it.”

DTD: What do you have to do different from Modifieds?  I see that smile on you face so it must be something.

SF: “A lot! It is a lot different. Getting comfortable is one thing and getting  shocks and springs under me that I am comfortable with. It’s cool. Hopefully, there might be something that I can take from this that might affect the Modified stuff in coming back over to them.”

DTD: Who is helping you out?

SF: “All my Modified guys are here, Kevin Bates, Tommy Conroy, Kevin White from the truck team is here helping, Mike Mancini, Chad, Adam McCaul and we are going to spend the next three weeks together and I am really fortunate. I really couldn’t do it without these guys. I am fortunate these guys took time off from work and dropped the stuff they were doing to come down here and play a little big and that’s it. These things are a lot more work than a Modified and way more work than a Sprint Car. I definitely couldn’t do it without these guys and we will keep on digging.”

DTD: Any Late Model guys helping you out?

SF: “Yeah, we got a couple of ringers up our sleeve and some pretty high profile phone numbers that I got this week. So that is pretty cool. A couple of guys from Longhorn are helping and that’s the big thing. They put a baseline set up in it for us and they’ve been working with me to help learn this deal. We are not necessarily on our own, but we are learning it. The stuff we learned from Matt from Longhorn from working with us at All Tech has helped and he will help us out next week at Bubba. He is with Jonathan Davenport’s team here so he has been feeding us some information and we are trying some stuff going back and forth and it’s pretty cool.”