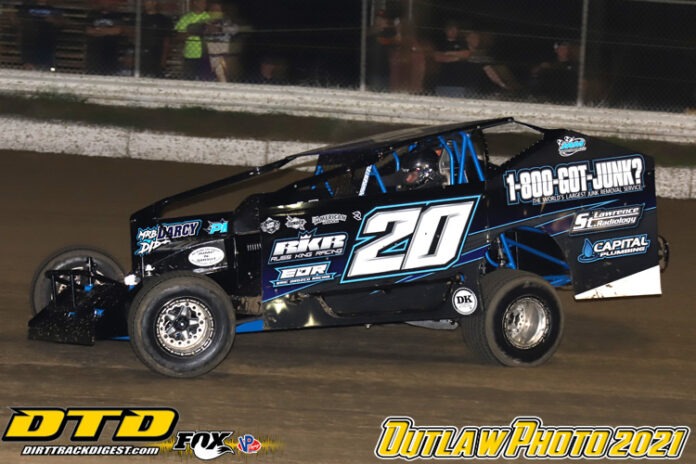 David Schilling is entering his third year in Modified competition and has made the trek to Bubba Raceway hoping that the trip home will be memorable for a much better reason than last year at All Tech.

Schilling just finished his new car hours before loading it in the trailer for a trip to the Sunshine State. He said, ”This is a new body and frame from Bicknell with a Bedell 360 small-block motor.”

The Eastern New York driver is much improved in a very short time and noted, “I feel I’ve gained some valuable experience with the help of the people and cars around me. I really feel I’ve started to learn more about shocks and springs from the people that are with me. I really feel I am just learning. The technology advancements are there with these cars and you just have to stay on top of them. I really feel getting my ass beaten weekly at Fonda has actually helped me. I have learned so much.”

Schilling is hopeful about the trip to Bubba, but knows there will be obstacles.


“I feel this place is a lot like Brewerton and I hope it races like Brewerton. It is wide in one and two and then narrows down between three and four. The surface could be super abrasive and tire wear will be critical. You come out of four full-bore and maybe lift just a little in one and you keep it full-bore right to three. I think you will have to diamond three and four,” he explained.

A year ago Schilling hurt himself due to the learning curve.

About All Tech he said, “It was the last night and the track was really rubbering up. People were burning off tires and I blew one, went to the back and then simply got overaggressive. I wrecked big time as I flew high into the fence and totaled the car.”

The 2021 season hopefully will see things return to some sort of normalcy.

A year ago Schilling said, “We ran at Fonda and then jumped around and ran the Super Dirt Series Oktoberfest. This year I plan on Fonda and to jump around.”

Though the 2020 season was miserable for many, David did pick up a Modified win as he said, “I won on opening night at Thunder Mountain in the Open Modified division.”

He hopes success will follow him in Florida this year as well as the upcoming Northern season.