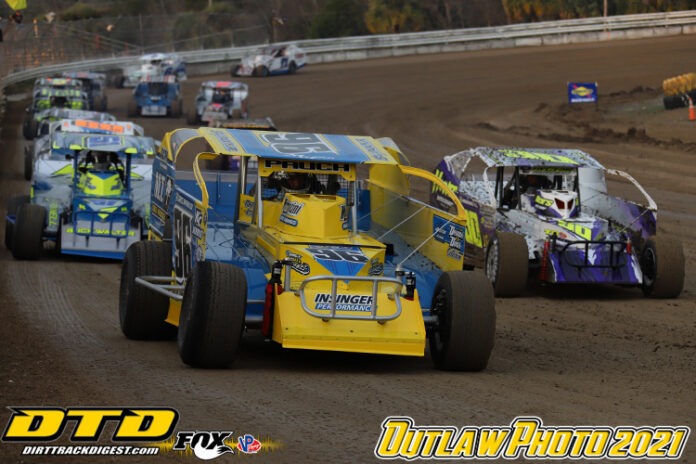 Heat action at Bubba Raceway Park was expected to be a follow the leader.

However, even though some front row starters qualified for the Modified main, several others came from far back.

Pole sitter Peter Britten captured heat number one as he held off JoJo Watson with the runner-up coming from ninth starting spot.

Several caution periods made for one of the longest preliminary events of the night as Cale Ross got turned around in the first turn and got locked up with H.J. Bunting. Moments later Chris Ostrowsky went over the front end of Bob Hentschel as both went off via the hook.

Head two was a run away for outside front row starter Danny Bouc.

On the initial green Jeremy Smith hammered the back stretch wall entering the third turn with the impact lifting the 46 high into the air. A couple of laps later he limped the machine to the pits with a flat right rear.

Matt Sheppard was also scheduled, but due to the fact he had a guaranteed spot from his fast times in practice he used it as a practice session.

Heat three was a Sweeteners Plus one-two with Max McLaughlin and Kyle Coffey one-two while Brett Haas and Danny Creeden were also guaranteed a berth in the feature field. Among the DNQ’s in the race were Billy Decker and Andy Bachetti.

Heat four saw Pole sitter Stewart Friesen jump to the early lead, but when Ron Cartwright got into Mike Gular the Cartwright car needed a hook and the yellow came out.

On the restart Erick Rudolph used the high-side starting position to his advantage and pulled ahead of Friesen.

Rudolph went on to win it over Friesen while Gular and Anthony Perrego also qualified.

The surprise of the race had to be Louisiana driver Brandon Hightower who started ninth and finished one spot shy of a qualifying spot.

The final heat went to Rob Pitcher as he pulled away consistently in leading all ten laps.

On the first lap Matt Stangle started in the last row and passed four cars, but he came up just one position short of getting in.

H.J Bunting simply walked away with the first consolation and finished three seconds ahead of Matt Stangle.

The third qualifier was a race long battle between Marshall Hurd and the Wild Child Andy Bachetti.  At the checker it was Hurd getting in.

In the second consolation J.R. Hurlbutt and Billy Decker diced for the lead, but on lap seven Decker got under and eventually picked up the win.

On the final lap Kyle Weiss was attempting to go from fourth to second between the third and fourth turn as he drove as low as he could get. The car didn’t stick and a scramble on the front stretch saw a wild scramble that brought fourth place Danny Johnson to second and David Schilling, seventh with one lap to go, got the third qualifying spot.