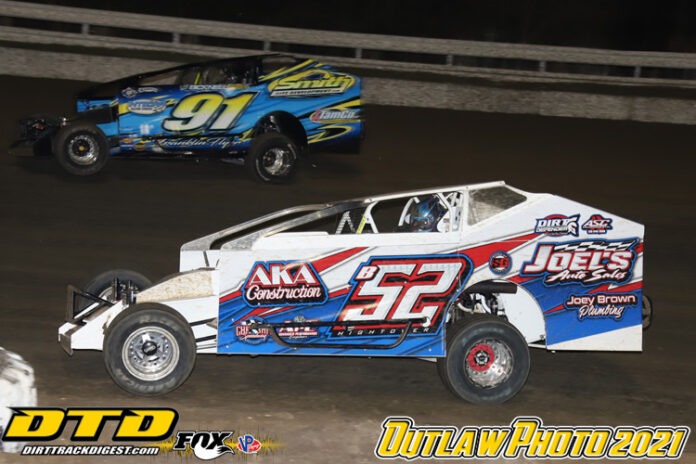 On opening night at Bubba Raceway the participants in the Sunshine Swing were concerned about the surface causing tire abrasion.

However, there was a red flag on lap one and the rest of the first series race went green to checker. Tire wear wasn’t an issue.

Turn the page to night two.

Tire abrasion came in loud and clear in a 40 lapper that started at 9:13 p.m. and finished up 50 minutes later. Even though the race was slowed by 15 yellows and a couple of reds the green flag sprints were sensational in what turned out to be a marathon.

Brett Haas and Mike Gular got together on lap four to bring out yellow one.

Haas’ night ended early after dropping some oil on the track.  He mentioned on twitter after the event “Car fell off handling wise in the feature, but the seal on the oil filter pushed out and we lost oil. Still had oil in the pan, so we fixed it and should be good for today”

On the seventh lap, Danny Creeden slowed with a right front flat.

Billy Pauch Jr. was leading at that point.

On the restart Stewart Friesen fell all the way back to eighth place.

A quarter of the way in Erick Rudolph, Mike Maresca and Pauch were one-two-three.

Two laps later Friesen was back to third.

A pile up one came in turn one with Tyler Dippel, Cade Ross, J.R. Heffner, Jordan Siri, Matt Stangle, Brandon Hightower, Jimmy Horton, Gular and Tyler Siri. Siri was the only car towed off with front end damage.

On the restart Friesen went to second behind Rudolph

Danny Hieber spun in the fourth turn on lap 13 and he brought out the yellow again two laps later as he stopped in the track.

Gular then spun on 21 for another yellow and on the restart it was chaos coming out of four as Max McLaughlin couldn’t get a grip on the track and they piled up behind him. Rusty Smith, Stangle and Haas were stacked together while also involved were Jordan Siri, Gular, Danny Bouc, Ruler Dipple, Jeremy Smith and Hightower.

One lap later the right rear hub broke on the Kyle Weiss ride as he came out of four. The car settled to a stop on the backstretch while the wheel rolled down the front straight.

The next yellows were brought out individually for Pauch, Bouc, Sheppard, Mike Mahaney while Haas soaked the track with liquid down the front stretch, through one and two and coming to rest in the back straight.

It was a marathon, but Friesen, Maresca, Rudolph, McLaughlin and Decker survived to finish in the top five.

David Schilling had the run of his career run as high as third with seven left, but he finished sixth after starting the last lap in fifth. When asked what happened he responded, “Driver ran out of talent.”

Qualifying was hectic on night two of the Sunshine Swing.

Mod heat one saw Billy Pauch Jr. get it hooked up and run away from the outside front row to get himself into the draw.

Tyler Dippel was followed by H.J. Bunting and Kyle Weiss to get into the main.

Weiss started tenth and at times raced three-wide to get himself into a spot.

Maresca was second in the early going, but the rear end came around, he spun off the inside of the track dropping over the berm and went to the rear.

Rookie James Hill was putting on a show with the car running the top of the track, but he lost the handle entering the third turn while in a qualifying spot. He failed to recover.

Brandon Hightower finished one spot out of the show. He did the same thing on night one.’

Brett Haas won his first heat of the year as he started fifth and moved quickly to the front.

Cale Ross was a solid second for his best run of the week while David Schilling and Billy Decker completed the qualifiers.

Decker started ninth and quickly worked his way into a starting spot in the Jeremy Smith owned car.

Kyle Coffey was a DNF.

The fifth heat had a bit of action early on as New Yorker now Florida resident Scott Kurtzner started in the front row, but got in a jingle with J.R. Hurlbutt and exited to the pits.

Sixth starting Erick Rudolph was the winner while Mike Mahaney, in the Jim Mahany owned Olum’s No. 33, got the other draw spot for the main,

Joseph Watson and Rusty Smith were third and fourth.

Perrego easily outdistanced the field in the first one as Jeremy Smith got second and Danny Creeden third. The late race contesting of the third spot between Creeden, The Doctor and a rapidly closing Tim Buckwalter made it interesting.

Hightower won his first Yankee Modified event in the second B. Danny Hieber was second followed by Jordan Siri.

The final laps saw Matt Sheppard, who started eighth, chasing down the younger Siri, but it was to no avail.

Matt Sheppard had one of those nights as he drew poorly for the heat, attempted to move with little success. He turned out to he a provisional with points from first night. In main he worked his way from 27th to sixth before getting a flat. He pitted and rallied for sixth. Weird night.

Two provisionals will get into the main with Sheppard and Heffner.