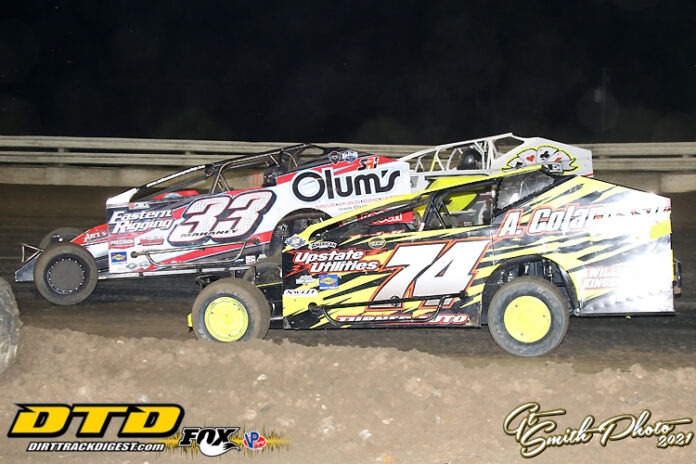 It was well worth spending the night at Bubba Raceway Park for the final night of the ‘Sunshine Swing’ as the curtain came down on Brett Deyo’s latest edition.

A few teams had headed home due to weather concerns, but still a solid field of cars were ready to entertain new and old fans alike.

Action started at 7:07 p.m. and it was around 10 p.m. when the Modified checkered flag fell.

There is no doubt there was exciting action throughout the night, but part of it was simply the fact that these guys knew it was the last night and many drivers won’t be exchanging Christmas cards this year.

Contact was a major part of the night.  Okay so it could have been the drivers or a track that supplied little and unpredictable grip from the surface.

Mike Gular, who had won just one STSS race in his career, was a surprising winner, but it didn’t come easy.

Victory lane could have had Stewart Friesen, Mike Maresca, Billy Decker, Erick Rudolph, Matt Sheppard and a few others.

The 50 lapper was eventful as runner up Andy Bachetti went to the pits on the fifth lap.

Friesen and Rudolph started far back in the field and watching them come through was exciting while Billy Pauch Jr. and Jimmy Horton, also from even further back, were simply fun to watch. Three-wide and even some not on purpose four-wide racing kept the fans attention.

Watching fans who you could tell really haven’t seen the Yankee Mods before was part of the show for me as the family in front of me was pointing in all directions, got showered with clay pellets and smiling at what they were seeing.

They appreciated something that many of us take for granted. It was a treat for them. I think this is something many of us regulars seem to forget.

Tyler Siri led 10 laps.  It was the first time in three nights that he didn’t go off with a wrecked car. It was the most track time he had and Tyler made the most of it.  His late run, running the high-side, resulted in passing Sheppard on the backstretch for fourth at the end.

The incident that has garnered the most attention saw Gular and Friesen racing side-by-side and they touched. In what looked like a racing accident.  Stew lifted off, slammed into a huge pit entrance guarding implement tire and flipped wildly. The car was destroyed and Friesen got out and walked away under his own power.

Back to the action, Billy Decker took over with 18 laps to go only to have Gular come back with less than 10 laps to go.

Decker looked so strong and thought he was in a good place.

Meanwhile, Rudolph, from 20th starting position, came home with a pass on Decker with two laps left to capture the runner up spot. He clinched a good Sunshine Swing championship with a three podium finish in as many nights.

So history will show Gular, Rudolph, Decker, Siri and Sheppard were the top five.

One of the runs of the night had to be the performance with the steady drive by sixth place finishing Danny Hieber. This was by far his best run of the week after he started 11th.

Twenty-seventh starting Pauch was fifth at the midway point then fell off the pace while Horton came from a provisional and 29th was eighth with 15 laps remaining. And finished ninth.

Maresca and Max McLaughlin were top five the first two nights only to settle for seventh and eighth.

Brett Haas, the 30th, starter was as high as eighth and rounded out the top 10.

Horton and Haas weren’t in the main as the top three from each B qualified. However, a decision was made to add the fourth place finishers.

An interesting twist saw a head game battle between Sheppard and Horton.  The duo restarted on the front row of heat four several times. On one restart Horton got squeezed by those chasing him up against the frontstretch wall. He went from second to fifth, eventually got a flat tire, pitted, came back, didn’t qualify and pulled up alongside Matt as the field was set to turn into pit row.  Horton then showed his displeasure as he cut off the 9s while he was making hte turn.

Heartbreak for Peter Britten as he was in a qualifying spot, spun and got hit by Anthony Perrego. The 44 suffered the most damage as the entire left side body work was pushed in.

Driving in to the main in heat one were also Hieber and Danny Creeden.

Friesen started outside of the second row, went to the outside and the line didn’t appear to work. He settled for sixth.

Brandon Hightower appeared in line for the draw, but got caught by Smith on the restate and finished third while Danny Bouc was the other car advancing.

On the sixth lap, Mike Mahaney spun in turn four, went to the rear and came up just one spot short.

The No. 3 of Jacob Dgien hit the fourth turn wall with his right rear and the car left the ground. He was eventually towed off.  Marshall Hurd and Kyle Weiss got the other two spots.

In the final heat Schilling and The Doctor were followed by Jordan Siri and Rudolph.

A few cars were absent on the final night of the ‘21 edition of the Sunshine Swing at Bubba.

Kyle Coffey had severe engine problems on Friday night, and though the car was in the pits, the team will be changing it when they head North. The Sweetener’s Plus duo of Max McLaughlin-Kyle Coffey are headed to Mooresville, N.C. where they will spend the next week prepping the cars for a return to the Sunshine State for Volusia.

Rob Pitcher has loaded up and headed home after problems on Friday night. He said, “I bent the rear end on opening night in the wreck with Peter Britten.”

Four cars instead of the usual three came from each B Main.

McLaughlin and Friesen dominated their races.

In the first J.R. Heffner, Joseph Watson and Pauch Jr. got the spots.

Thinking that three were in, the side-by-side action between Watson and Pauch was near catastrophe. With laps winding down Pauch went high off four and Watson just kept pushing him up almost sending him into the guard rail. At the end Pauch used his front bumper to “thank” Watson and then Joe put his car in reverse to say “you’re welcome.”

In the second Mahaney was a distant second while Tyler Dippel appeared to be the final car in except for the late decision to add the next one…Brett Haas.

It certainly is strange seeing the entire racing pit on the track ironing out the surface. It took a bit of “encouragement” but eventually everyone was on the speedway shortly after 5:30 p.m. to get things going.

Scott Kurtzner, Nick Petralik, along with Bob Hentschel also called it a week.

Thirty-three Sportsman were in the pits on the final night.

Anthonly Tramontana nearly took a wild ride as he was pushed up the track with heavy contact and the front end lifted high in the air in heat three while Addison Bowman picked up the win.

Shawn McPhee finished up the qualifiers with a fourth heat win.

Stephen Kemery captured his second main of the week and earned the Sportsman title.

Addison Bowman had his second consecutive runner-up finishes as he chased Kemery the entire race. However, the bottom was where everyone was running as after the Modified race.

Now another year the Sunshine Swing is history. Hopefully, there will be a third edition.