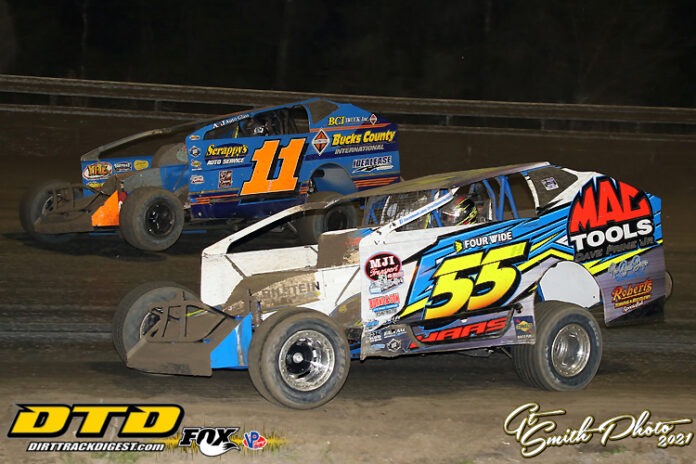 Brett Haas and David Prime Jr. certainly hope that their partnership will pay off in solid results for the 2021 season and they kicked off the new year in Florida’s Bubba Raceway Park.

Haas has been behind the wheel for a long time and reflecting on his career he said,

“I started my career racing snowmobiles when I was a kid, and after a few years of that we began racing go-karts at Whip City Speedway in Westfield, MA. We won our first go-kart championship our second year racing and I decided to follow in my fathers footsteps and begin my career at Lebanon Valley Speedway in the Sportsman division. We had a learning curve the first two years, but the third year in we won our first Sportsman championship.

“Two years later when the open Sportsman division dissolved, we moved up to the 358 division where we won our very first race in the new class which was a huge confidence boost. Finally in 2020, we won our first 358 championship which was a nail biter right to the end after blowing up our first night out while leading. We also got our first big-block Modified win in only our fifth start in that class. To say that was one of the proudest moments in my career thus far would be a complete understatement.”


Prime also has been involved in the sport for quite some time as he said, “So I grew up always loving racing. I never had much involvement with it besides being your normal fan in the stands. At the age of 23 in 2013 I started my Mac Tools Franchise. One of my close friends and really good customers was Elmo Reckner. Every week I would show up to his autobody shop and see all the the race cars out there (where he also ran Elmo’s Speed and Supply out of). Naturally my questions grew. Every week all I did was ask questions.

“Eventually around 2017 I asked to help sponsor his car. Naturally I went back to the races, but this time in the pits. And that was it I was hooked. The following season I was the main sponsor on his car. After that season at Lebanon Valley Elmo wasn’t sure if he was going to continue with racing. So I hopped on board with another race team which I was the primary sponsor for. I had them running the STSS series with Brett Deyo and running full time at Albany-Saratoga. Unfortunately things didn’t work out the way my wife and I hooped for.

“At the same time all of this was happening I was also the primary sponsor for Brett Haas’ big-block Modified at the Valley. So after the wife and I decided to part ways with the other team.  We decided to bring my program to the Haas’. Being a car owner at the age of 30 was nothing I ever expected to do. But here we are the wife and I love it and this is something my kids get to grow up being around. I am super excited to give Brett and his team this opportunity to really shine. I have nothing to say besides how pleased I am to have Brett and his team on board with my program.”

Haas, when asked about his style of driving he explained, “I would say I am patiently aggressive. Sometimes racing is like chess and although you have split second decisions to make, you have to be calculated. Sometimes I see a lot of drivers trying to win the race on the first lap, which causes absolute mayhem, but attrition usually takes care of them mid way through the race. My father was known as one of the cleanest drivers in the Pro-Stock division, and I try to live up to that the best I can. Respect on the track is a big factor in the way I race other people because I do not like tearing up equipment unnecessarily. “

This year with Prime he noted, “Dave (Prime Jr.) with Mac Tools has been a marketing partner on our car for a few years now, and this past year he was the primary marketing partner on our big-block car at Lebanon Valley Speedway. At the end of the year we really began to talk about our future plans together and what we envisioned our program together would look like. Once we began talking, I think we realized how good of a fit we were together, and how well him and his wife (Britney) gelled with our team. They felt like family.

“There doesn’t seem to be too many people in the sport that really understand what it takes and how much time and money is involved, but Dave does and is completely supportive. That is why we decided to build a 2021 Bicknell with Dave’s small-block motor and essentially shake the car down before we headed down to Florida for the Sunshine Swing. Although we were outpowered at the very fast Port Royal, we qualified for the 200 and put together a solid performance for our first race together with this new team.”

When looking forward to his new venture he said, “One nice thing that we talked about in this new venture running the Short Track Super Series (North Region), is the fact that there is no real pressure. Obviously as a driver, I put pressure on my own shoulders to perform the best I can to get results, but we know that taking the show on the road is going to be a learning experience.  We’re fulling prepared for that and with Dave and all of my other marketing partners support, I know we have the best tools in our toolbelt we can to perform our best at these tracks. I have an opportunity in front of me that I used to dream of having and now I do so we’re going to enjoy every second of it.”

And there are expectations as the duo looked forward. Haas said, “I believe that 2021 is going to be the year we set the foundation and footing for years to come. We are going to come out swinging, and believe that with our team we can adapt quickly. We know other teams will have notes from all these tracks where we haven’t been to before so we will start at a slight disadvantage, but with all of the research we do, I am hopeful we can find the speed that we need to adapt quickly.”

Of his expectations, Prime said, “I do not have any real expectations for this season. With Brett coming off of a small-block championship and his first year in a big-block to get a win at Lebanon was huge. I really just want to go have fun with my wife and kids and now a team that I love and show these other guys that there is someone else to watch out for. I truly believe that Brett will be a threat.

Prime looks forward to the upcoming year as he said, “Plans will be to run the STSS North Series full-time and as much of the South series stuff as possible with my equipment and full-time at Lebanon with Brett’s big-block car and start off the season at Albany-Saratoga with my big-block and see if its obtainable to do all three.”

He feels confident over the STSS and explained, “The reason that I thrive for the Deyo series is because it allows you to race with what you have, many combinations of motor and we get to travel to all of the different tracks and race with the best. Also with Brett’s knowledge and skill I truly believe that we will not go unnoticed.”

Continuing he said, “I love Lebanon Valley. Its home for me. So that’s a given that will be our ‘home track’ through the years to come.”

So they were at Bubba Raceway Park looking forward to the beginning of a new adventure.  Haas had some good runs with a heat race win.  His feature results were a 16th, 18th and with a highlight of the week a 10th place effort in the finale.