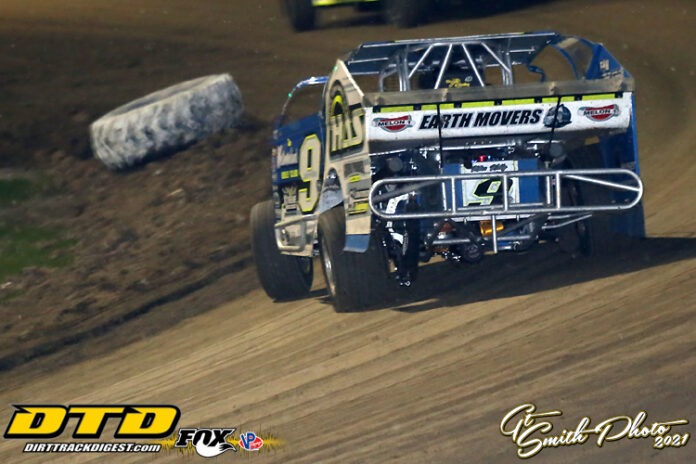 Brett Deyo’s ‘Sunshine Swing’ came to Florida for the second consecutive year and Dirt Track Digest was on the scene.

So last Wednesday I headed north from my winter base in Nokomis and made the straight run up I-75 toward Ocala.

I had just passed Tampa when I realized the clouds ahead of me could be water bearing. So about 60 miles from Bubba Raceway Park ,I stopped, checked the weather app, made a phone call, flipped open the Short Track Super Series app and turned around and drove 100 miles back south.

Night one, much like last year at All Tech was a wash out.

So Thursday afternoon I headed out again in no rush.  I just read roadside billboards and realized it was getting to be a different region than where I reside. Bible boards were all over the place reading “Are You Going to Heaven or Hell” or simply “Jesus Saves.” There were a substantial number of “Trump and Pence 4 More Years” and even one for a low cost, low cost vasectomy.

However, where I was going hit home when the “Boss Hogg Radio, No Crap and No Rap” sign greeted me just south of Ocala.

Upon arriving at Bubba Raceway Park you immediately pass the third and fourth turn wall which is about 20 feet from the roadway and palm trees greet you as you turn in. There was plenty of parking and substantial camping space.

The core of the facility is pretty compact. There are two sets of grandstands with the obvious frontstretch and then high on a hill in the fourth turn where there are thousands of clay droppings right up to the top of the seating. It is a place where a shower is supplied during the races.

Once walking through the main gate to your immediate right is a beer saloon area while two concession stands supply everything from kettle corn, to pizza, to chili loaded french fries and a host of other foods.

The Bubba Army apparal stand if larger than the concession stand.

If you leave the grandstand area you make a left and walked a very short distance to the pits, but before you enter there is a tenderloin pork sandwich stand which provided a huge piece of tasty tenderloin. If you get there early enough, both grills are packed with tenderloins. Something just a bit different.

Once in the expansive pits there were 47 Modifieds and 36 Sportsman.

It was going to be a good night.

One thing about Bubba’s is that the layout is significantly different from anything up North. The first and second turns are sweeping and long. The backstretch angles in toward a paperclip three and four. The cars come off four full-bore and really don’t lift until entering turn three.

The surface turned out to be a nightmare for the drivers as the surface, some called it “snot,” was as unpredictable as a drunk who had consumed a dozen beers. No one knew what the track would do. What stuck one lap was gone the next and might, and I say might, be back the next circuit.

Down here the track is heavily watered prior to racing action and it was less than popular that the Mods and Sportsman went out to work the track in…not push trucks or tow trucks or packers. Racers were the packers. Sort of what it was like before Glenn Donnelly began promoting in the Northeast.

Talk in the pits on opening night was the expected abrasiveness of the surface to tires.

Strangely, night one, saw a red flag for a high flying Peter Britten flip after he was rocked in the left side on lap one and then the race went 35 laps under the green with tires not an issue.

The second night it was a marathon 50 minute 40 lap race which had tremendous excitement in spurts.

However, the tire issues rose up and bit way too many drivers in the final eight laps.

Winner Stewart Friesen fell back to eighth on a restart, but two laps later was up to second.

The restarts were nightmares as the surface would pack the grooves of the tires under yellow and on resumption of racing it might take two or three laps to clean them out. There was absolutely no consistency of the surface and it provided a moment to moment surprise.

The funny thing though was that Matt Sheppard started 27th with a provisional, drove up through for sixth, sustained a flat, pitted with eight laps to go and rallied to finish sixth.

Billy Decker started 18th and he was up to third before finishing fifth.

Mike Maresca started 12th and was second on lap seven before coming home in the runner up spot.

It was wild and wooly as you never knew what was going to happen.

For folks who thought there might not be passing Billy Pauch Jr., Jimmy Horton and Brett Haas (tenth place) from 27th and beyond to dice through the field. Meanwhile, Friesen who got bit by a bad draw and had to qualify through a B along with Rudolph were back in the 20’s of the starting field.

The Friesen-Gular contact on the frontstretch that sent the 44 hammering into a huge implement tire at pit road as he jarred that loose and then the car headed for the catch fence, but caught the top of the wall as spectators scrambled.

It was a spectacular finale and Gular picked up only his second STSS win of his career.

So this one was history after Stephen Kemery eked out a win over Addison Bowman in the 30 lap Sportsman main.

Sunday it was time to head home as the DTD TV crew that I worked with all week looked anxiously at weather reports in the north, the photographers headed home to prep for Volusia and for me it was time to get to writing.

The morning was interesting as once again the regionalism of Ocala was quite evident.

I stopped to fuel up at Circle K and noticed it was one of the only places I had ever seen burnt ends and pulled pork picture signs on the gas pumps, talk of different gas station food.

Of course a Cajun Spicy Bojangles biscuit had to be found for the ride home.

So there I was heading home thinking of the next racing stop while watching more than 30 Lucas Oil Late Models make the trek North to the track where I had just left where they would be running on Monday night.

Racing season is here and time to be Makin’ Tracks once again.