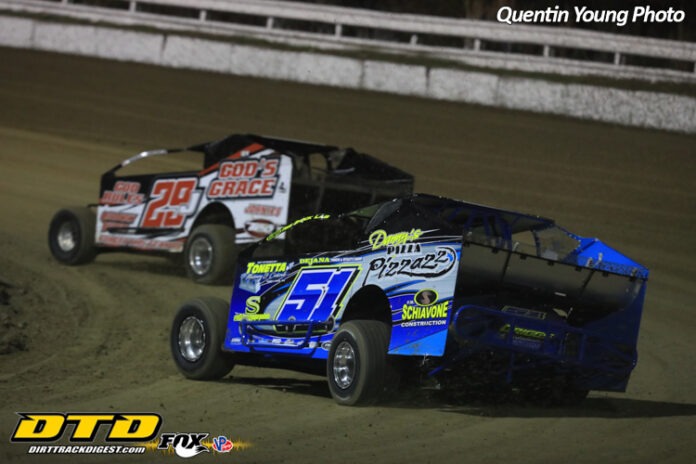 Tim Buckwalter made his first ‘Sunshine Swing’ at Bubba Raceway Park as the 2021 Modified season kicked off.

Entering the final night of action Buckwalter talked about the first two events as he said, “You know it is what it is. We weren’t off to a good start down here as we had our problems. We are still working on it. We will learn what we learn here and leave it here. What you learn here you aren’t going to bring to anywhere else.”

Continuing he said, “The track is a little goofy and doesn’t seem to be getting any better. Four nights here and nothing has changed. I guess it is what we got. I guess the surface is a lot of sand, but I am no dirt expert so I just try to accept what they give us and go for the best.”

Buckwalter, like all racers is a competitive driver and despite the uniqueness of the track, said, “I am glad we came down here, glad Danny and his crew gave me an opportunity. It is a good way to start to know for what we got when we start back home.”

Well indeed they did find something as Buckwalter finished second in his heat behind Matt Sheppard and not only qualified for his first feature, but the draw to start sixth in the main.

He ran as high as third place on the sixth lap and hovered between 10th to 12th at the midway point, but slowed dramatically with seven laps to go and ended his night in 22nd after pulling to the infield on lap 45.

Even though he hasn’t had a Modified at Bubba in the past, this place isn’t exactly new to him.

Looking ahead to the upcoming season Tim explained, “We are going to run Big Diamond on Friday night with Norm Saxon and the 51 here of Danny’s Pizza at Bridgeport and Deyo’s South schedule. In open wheel we are doing some of the 410 stuff and some of the Eastern Storm and run the SpeedSTR at Kutztown and Bridgeport.”

He will be back at Bubba with his 410 USAC Sprint in a couple of weeks and said, “It’s about the same as a Modified, but you do have to twist it around pretty good and stay on the throttle.”

Though he doesn’t run the relatively new USAC 360 Eastern Series, Buckwalter commented, “I think it is great to bring wingless Sprint Car racing to Pennsylvania. Curt Michael and his team have done an awesome job developing that and got a good series going. I hope they can keep it going. I think the fans like it and they are getting a decent following. Last year they had better car counts.”

His ability to run Mods and Sprints effectively and to adapt is important.

Explaining his adjustment, Tim said, “It’s not too bad. You put your helmet on and you’ve got one job and that is go as quick as you can without spinning the tires. It is all basically the same concept.”

So the 51 team loaded up to head home and no doubt this trip was memorable for a variety of reasons.