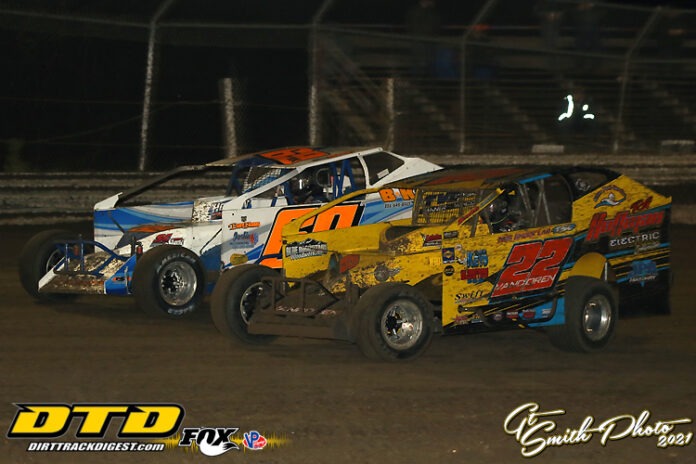 Stephen Kemery book ended wins at this year’s Sunshine Swing for the 602’s at Bubba Raceway Park and in between Tanner VanDoren was able to win the other.

The two drivers led a field of 36 Sportsman to the Ocala area facility and not only did Kemery win two, but captured the championship.

The Sicklerville, N.J., driver said, “I was here to observe a closed practice earlier this week and our practice was completely different. But it was good to get the monkey off our backs in the first feature and the win will allow us to afford fuel to get home. This surface is like no other I have ever been on as it is slimy, but that slime can rubber up quickly.”

Meanwhile, night two didn’t go as well as Kemery said, “I had a bad pill and it was hard to pass. However, we did go from 22nd to eighth so I guess that’s okay.”

While Kemery was struggling on night two, the same wasn’t true for VanDoren.

The diminutive driver celebrated his 13th birthday with a win after starting seventh on the field, moved to second on the 12th circuit and took over at the point on lap 24 for his third career win.

He said, ”It felt great. We struggled  earlier in the week, but it was a different story on Thursday as we figured out several changes that helped. It definitely was a confidence builder for me and it showed the car could win.”

The Schnecksville, Pa., seventh grader certainly didn’t seem like a newcomer as he said, “The track was different and it is not an easy track to drive. You really have to get use to it with the corners being so different. “

His hopes of winning on the final night were dashed as he failed to finish.

Kemery runs the legendary 69K number and has similar colors to the Kreitz legend.

Interestingly, he explained, “My grandmother picked out the number and colors when I was five years old and I’ve kept it the same. She wasn’t even a Kreitz fan.”

This coming season he plans on running at the newly configured Bridgeport Speedway, Georgetown and the STSS South shows.

He is looking to build upon last season where he won six races.

VanDoren, who defeated Addison Bowman by seven-tenths of a second  said, “The win here was my third win of my career and I’ve won at Orange County and Delaware,” doesn’t have the choices that Kemery does.

He can’t compete in New Jersey and can’t race at Grandview.  He said, “I hope to do some small-blocks at Orange County and Open Sportsman at Big Diamond. I would like to run at Port Royal and Eastern States big races.”

No doubt that he has come a long way from Slingshots, but along the way he has received help from “Tim Buckwalter, Grant Hilfinger and his dad Jason.”

So the STSS 602’s head back home, but there will be talent on the track throughout 2021.