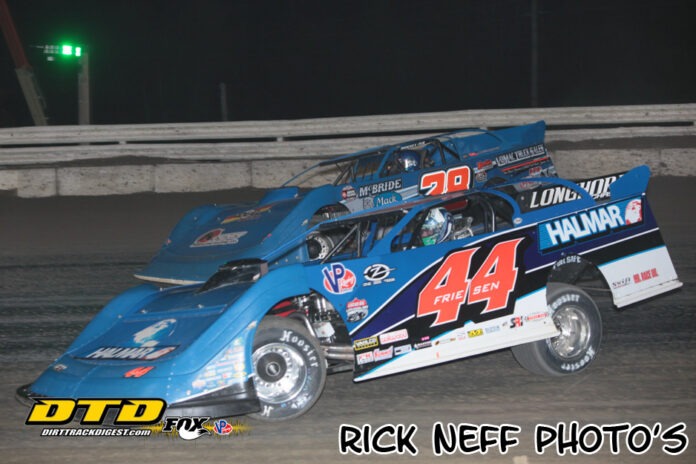 Stewart Friesen has jumped into another racing pool and it didn’t take too very long for him to get the handle of the Lucas Oil Late Models.

At Bubba Raceway Park on Tuesday night he timed second fast in his group, won a heat, started fourth in the main and finished seventh.

Dirt Track Digest reached out to Friesen for his thoughts and feelings of the night he qualified for his first A-Main.

Dirt Track Digest: What did it mean to qualify for your first late model feature?

Stewart Friesen: “It was very validating, I was definitely frustrated after missing the first few shows so it was good to finally get in one and run respectable. The coolest part was all the messages that I received from my friends in the Modified community, that were cheering for us.”

DTD: Second quick time. What was different from night before in getting you to that level?

SF: “Just making some changes with the car, learning what it needed and really focusing on hitting a good qualifying lap.”

DTD: Was track similar as with mods?

SF: “It was, although I felt like it raced a little different every night.”

DTD: What was difference in feeling between mod and Late Model?

DTD: What were your feelings in winning heat? It looked like a great battle against a 30 year veteran? Haven’t seen that type of smile in a while.

SF: “It was definitely a sense of accomplishment for our whole team. Halmar and all my guys put a lot into this deal for me, and running up front is why they do it. I was just happy to live up to my end of the deal.

“We actually parked next to Dennis at All tech and got to know him and his team a little bit, great guy and top notch team for sure.”

SF: “I’m usually not happy with backing up, but we were in good company and I learned so much more that we can apply to the next one. I tried the top a couple times and lost spots, and we went conservative on tire choice which hurt throughout the middle of the race, but the last thing I wanted to do was put a hard tire on and drop like a rock at the start.”

DTD: In your fourth attempt are you happy with your progress and why?

SF: “Yes for sure, I was really blown away by the level of competition, I would have liked to get in all the features but our team really learned a lot that we can apply in the future as well as some stuff that I think we can try to help our modified program.”

SF: “I’m not really sure, but we will base it out of the truck shop and look to hit some races around the southeast early in the year.”

DTD: Also you are a veteran racer and among best in Modified. How does that fit into running against some of Late Model guys who are legends in their class?

SF: “I’m a big fan of all sorts of Motorsport discipline, I’ve been very lucky to race against the top drivers in the country in Modifieds, sprint cars, the camping world truck series and now being able to run with these guys in the late model stuff is something I’m just proud to say I’ve been able to do.”

DTD:  You started fourth anything going thru your mind about those cars around you. Heck you are a rookie.

SF: “Yeah for sure, it was similar feelings to my first sprint car race at East Bay 10 years ago with Doug Emery. Just experiencing what happens with dirty air and racing around other cars is so much different than when your out there by yourself. I was so nervous after timing well it made me sick to my stomach before the heat.”