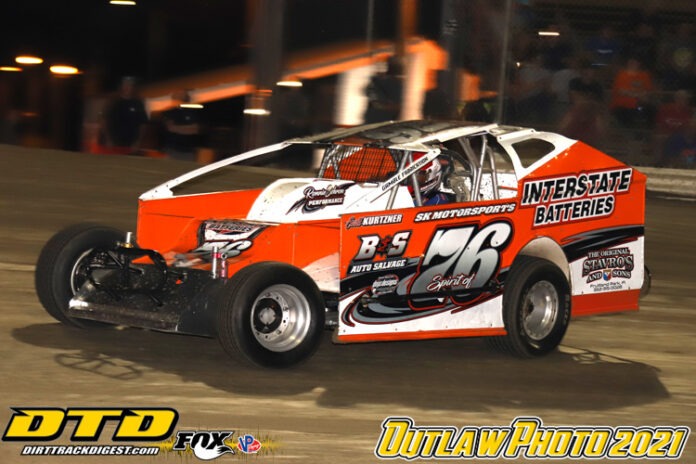 When you talk Modifieds in the Sunshine State the common denominator is “UMP”.

The UMP’s are widespread and as multiple as the car staining inflicting Love Bugs.

However, when you talk about Modifieds that the Northeast fans grew up with these migrate to the sunny south just two times a year…once for Brett Deyo’s Sunshine Swing and the other the five nights at Volusia with DIRTcar.

But in the midst of the gators, beaches and New York quality traffic jams there is one lone big-block Modified and it made its appearance at Bubba Raceway Park for the second Sunshine Swing.

Of course there were some New York roots involved.

Scott Kurtzner entered a big=block in the series, but suffered mechanical failure on the second night and was a no show for the finale.

He said, “I came down here in 2001 and before that had run at Lebanon Valley and Accord.”

He continued, “I saw Brett was bringing the Mods here and I purchased a car from Jim Passino. I’ve raced UMP and Late Models down here and started racing back in 2002. I was the rookie of the year in the Super Late Model at Thunder Cross Speedway down in Okochobee. I won a feature the first year in a Late Model and ran third in points at Bubba in ‘13 and ‘16. Buzzie (Reutimann) beat me for second in points, but by just five points.”

The 602 class runs at North Florida and Scott does made some appearances there.

He brought a second car to Bubba and ran it in the Sportsman division with Jacksonville’s Phil Beaver behind the wheel. That car was an older Troyer.

Scott jumped in head first to the Modified effort for the Sunshine Swing as he explained, “I had a new UMP car and sold it. I have this car and really wanted to do this. The car is a ‘12 Teo with a tall cage.”

Looking at his first Mod run at Bubba, Kurtzner said, “During practice I got into the wall and bent the right front up and that put us behind, but I did hit the 16 second mark. The top 15 guys here who run all the time probably were in the 15’s range so I am happy. I did draw the pole for the heat race and I know I just need to have a big set of kahoonas and drive the bottom. If I get up the track that will be it.”

His strategy worked for a couple of laps before he got pushed to the middle and faded.

Wondering if UMP experience on the track helped, Scott said, “UMP’s have an eight inch tire and a ton of power, but no tower while the Mods have a ton of horsepower and big tires.”

So even though it wasn’t the most successful week he’s had it was easy to tell that Scott Kurtzner was home again enjoying his seat and track time with cars from where he came from.