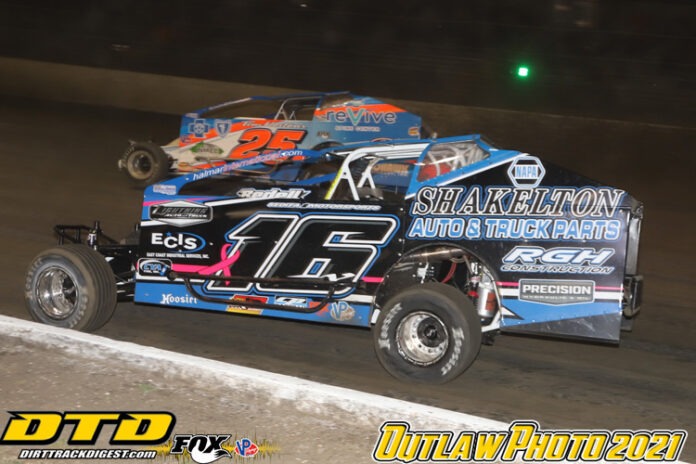 Danny Creeden has experience at Volusia Raceway Park, but it isn’t what the regular drivers have experienced.

Entering the ‘21 edition of the DIRTcar Nationals, Creeden said his previous visits to the fast Florida track was simply, “Came here to watch and drink beer.”

That all changed on the first night of the five race series on Tuesday.

Creeden, who usually is encapsulated in a red and white 16 on the Short Track Super Series said, “That one is our family car, but George Shackleton owns the big-block.”

He noted, “I had a good draw tonight with 10 and I simply want to go out there every night and make them all (the features). A 10th would be what I am shooting for.”

Well, in feature number one, that 10th became a reality.

After his time trial, in which he was second to Jimmy Phelps, the 16x had to be pushed off the track.

Danny said, “I timed good, but the way the cars roll over here there was a problem and I wasn’t getting enough fuel.”

He started the feature from the inside of the third row before settling for 10th.

Joining Creeden in the pits is a legend in Northeast racing.

Danny said, “Butch Tittle is my general manager. He is a great guy and I could sit with a beer listening to him tell stories of those days in racing for hours. He is always with me,” and is genuinely part of the team.

Creeden, who works for Halmar as a mechanic, was in Florida for the STSS shows at Bubba, but noted, “I was able to go home, work for six days and got back here yesterday.”

The first trip to the Sunshine State left a bitter taste in his mouth.

Creeden has a philosophy when he’s racing.

“I guess you could say I’m a little aggressive, a little hot headed, but you will always know what I think.”

One of those comments involved the STSS at Bubba.

He said, “I will support Brett Deyo through and through, but I didn’t like the idea of being $70,000 packers over there, but that wasn’t Brett’s fault. We were able to test this car over there and it seemed good.”

Creeden appears to be one of those guys who is outgoing and jovial outside the cockpit, but that changes dramatically when he slips behind the wheel.

He’s off to a good start at Volusia and hopes to build upon it the remainder of the week.