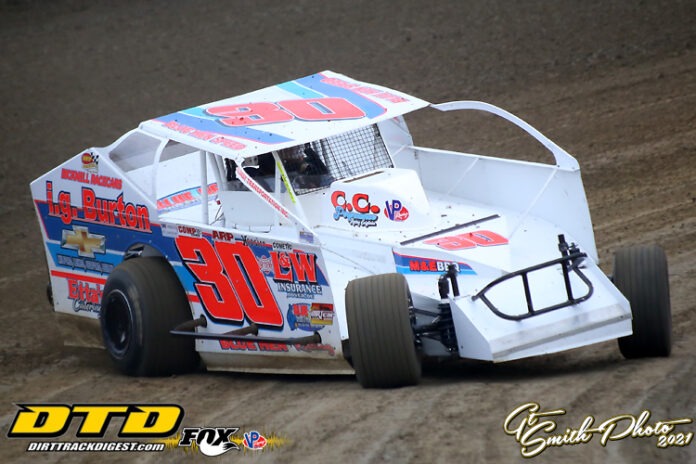 Ryan Godown found himself in different surroundings as he prepped for the opening night of the DIRTcar Nationals at Volusia.

He said, “Eugene and I talked last summer and he asked if I could do some winter driving, so this came together. I snowplow for a living.  Thankfully my son is covering for me this week so I can be here. We have some large contracts so that work has to be done. I flew in yesterday.”

Continuing he said, ”The regular driver JoJo Watson couldn’t take time for work to race here as he was over at Bubba. So I am looking forward to this. I want to do the best I can do this week and bring the car home in one piece.”

In the main-event Godown was up challenging for fifth only to suddenly see the car die on the track.

He said, “We had some sort of fuel problem. We had enough fuel, but it wasn’t getting to where it needed to be.”

For the veteran driver this week is also seeing him hit a strong learning curve.

He did run one season with the Super DIRtcar Series, but his career has seen him mostly on a totally different American Racer tire rather than a Hoosier.

Godown indicates there is a difference and explained, “American Racers simply have much more grip while Hoosiers are like putting concrete blocks on. You can’t slide around.”

However, that didn’t seem to matter as was second quick to fast timer Stewart Friesen in the group two qualifying and finished third behind Friesen and Billy Decker in his heat.

His 10th place starting spot saw him really start to move around the halfway point, but just as it appeared he was in racing rhythm, the fuel starved motor eliminated the 30 from competition.

Track surface is something you have to adjust to and Ryan explained, “Tracks down here seem to be different every time you go out, but a good driver has to make adjustments to get it done.”

Though not much to show for the first night, Godown appears to have the equipment to put together a pretty decent week for a substitute driver with a different team.