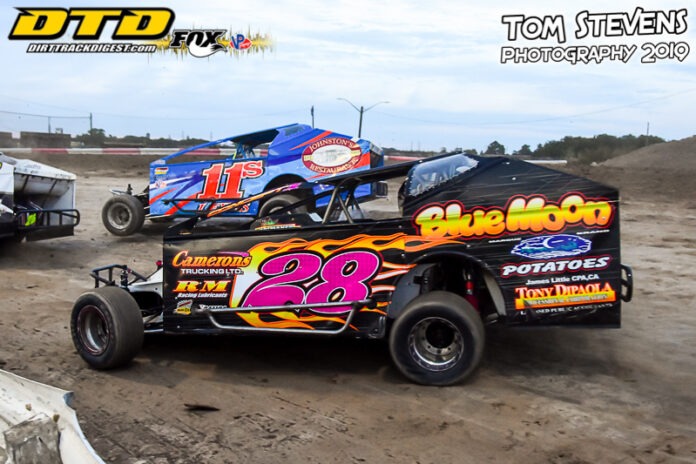 At approximately 2:30 p.m. on Tuesday the racing fortunes of upwards to 10 Niagara Peninsula racing teams were placed in jeopardy as devastating fire swept through Niagara-on-the-Lake.

Todd Gordon and his dad own Concepts 1 Fabrication and that was just one of approximately 50 to 60 shops that went up in flames.

Even as fire crews were attempting to douse hot spots in the complex Todd graciously spoke to Dirt Track Digest about the situation.

He provided a detailed account of what is happening at the site.

Todd said, “My dad and I own the business and we built street stocks for local guys as well as bumpers and bodies for Modifieds and Sportsman. The fire is still under investigation, but it started in the front office area and spread.”

Continuing he explained, “These are three rows of old chicken barns about 500 feet long and the shops are all various sizes. They are all 35’ wide and you just decide how long and the landlord builds the walls. The fire spread quickly through the attic.”

The structure is a haven for motorsports and motor vehicle enthusiasts.

Todd explained, “There are varying businesses including motorcycle restorers, a guy storing old Army Jeeps and many mechanical garages along with race teams.”

He noted the popularity of the site is that “it is about five minutes away from Bicknell, which makes it easier to get parts.”

He noted, “At least 10 racing teams were impacted by the fire they included Modifieds, Street Stocks, Mini Stocks, Sportsman and Sprints.”

Looking at the impact on race teams and his business he said, “There really doesn’t appear to be much to salvage. We had three Street Stocks ready to be delivered this weekend. We lost three welders, all our fabrication tools and more or less we lost anything you needed to build cars. We will try to regroup and rebuild, but we need to look after our customers needs before we worry about ours.”

Todd noted they lost two cars of their own.

Noah Mamo’s race team was impacted by the fire as he explained, “Our team consists of two cars plus my buddies car that was lost in the fire as well as my new car. Our other car is at my father’s house and it’s safe, but my buddy’s car and my car, welders, all of our tools, and tons of spare parts are gone.”

Most of the cars that were destroyed raced regularly at Merritville and Humberstone as well as several coming stateside to compete.

Noah noted, “It appears there were a few Sportsman, a few Street Stocks, a few Mini-Stocks and a few Sprint Cars as well as Todd’s business.”

A GoFundMe account has been established as many local car enthusiasts in the Niagara Peninsula are assisting.

For so many teams this complex was perfect for their shops as Gordon said, “We might not have room at home to maintain our cars, but many teams found this to be a good place to do so.”

Sadly, not only race teams, but motor vehicle enthusiasts were impacted by possibly the largest fire in recent years in the Niagara-on-the-Lake area.

Editor’s Note: I would like to thank Todd and Noah for cooperating with DTD in an effort to tell their story. We wish them the best on the road to recovery and hope to see all the teams at the track at some point. I would also like to thank Clinton Kruchka and Adam Ross for their assistance