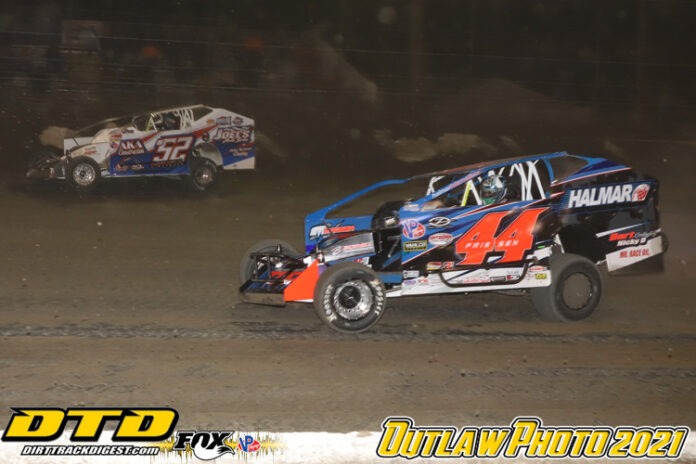 Thirty-two Big Block Modifieds made the trek from the Northeast for the Super DIRTcar Series race of the 2021 season.

Stewart Friesen kicked off what will hopefully be five nights of racing with a 3.164 second win over a regrouping Peter Britten in what was a see saw affair highlighted by a big Friesen lead that disappeared in heavy traffic allowing Batman to close in, then Britten overtaking as the No. 44 was relegated to second on a restart only to see the yellow come out.  Near the end Friesen had a scare as he nearly slammed full bore into the rear end of a rapidly slowing Tim Fuller exiting turn two.

But when the dust had cleared Friesen took home $4,000 for the 30 lap affair, but also had earned fast time and dominated his qualifying heat.

As a thanks to the touring drivers officials started all 32 in the main-event which early on provided some interesting racing as near the midway point only a couple of cars had pulled to the infield.

In an attempt to beat weather and dodging a couple of rain drops the feature started about 11 minutes before nine.

Jimmy Phelps had won his heat in alpha male style and was on the front row with Friesen. The B’ville Bandit led lap one, but coming off two on the second lap Friesen rode the cushion and away he went.

Jack Lehner, who had a solid night turning fast time in his group which included the likes of Max McLaughlin, Matt Sheppard and Mike Maresca, got in trouble as he stopped on the high side against the wall on lap two.

Yellow came out again just a couple laps later when Justin Wright attempted to pull off the track on the back straight, but the official opening the gate didn’t see him coming so the car came to a halt.

A massive pile up that left a lot of body damage on Tyler Jashembowski, Jessey Mueller, Jim Britt and Dave Rauscher slowed the race again on lap 11.

It was on that restart when Brittan had gotten past Friesen only for it to be called back.

The red came out on the 17th lap when 13-year-old Derrick McGrew Jr., running his first big-block show, jumped the cushion in one flipping the car after contact with the wall. He was okay, but his dad said, “The car is pretty torn up with the front end, body and steering, but we are going to try to get it back together.”

Godown began to make some movement and found himself challenging for as high as fifth place, but he slowed on the 19th lap with fuel problems that forced him out of the action.

The late race battle between Decker and Max was a good one, but with time winding down the No. 32 found itself high and brushing the wall between three and four thus opening the third spot for Decker on the final laps.

Friesen, Britten and Decker were the top three while Max settled for fourth and Williamson rallied in the late going for fifth.

Rudolph put himself behind the eight ball early on as he timed sixth out of eight in group two behind Friesen, Godown, Decker, Brett Hearn and B-Main winner Rich Scagliotta.

Hot laps were relatively uneventful with McGrew scraping the wall between three and four, but not apparent damage resulted.

Danny Creeden had to be pushed back to the pits after his first ever ride on the Volusia surface and noted, “The way the cars roll over here resulted in us not getting enough fuel to the engine, but we just needed to run more.” Creeden was second fast to Phelps in group one.

Jessey Mueller was fourth fast in group one, but at the end of the night his entire right side needed to be hammered out as he was involved in a multi car feature accident.

Louisiana’s Bandon Hightower was in a big-block at Volusia for the first time in his career and noted there was a tremendous difference between the open small-block he ran at Bubba and a DIRT legal Big Block.

Lehner in group four had the third fastest time overall in time trials.

Godown was a DNF due to fuel problems and the crew was going over the engine compartment while other teams loaded.

Matt Stangle dropped out as he lost his brakes.

Dave Rauscher, Jim Britt, and Mueller were just three of the guys with body work repairs awaiting them.

Justin Wright had the right front brake caliper freeze up.

Several drivers who fans thought might be in attendance weren’t

Mike Mahaney noted, “Our expenses calculated out to most likely be above the given purse t Volusia.”

Chad Phelps was thinking about it, but is fighting a mild bout of Covid and he stayed home in bed.

Larry Wight and wife Brooke just became parents for the second time just a couple of days ago.

Tyler Siri, who won here a couple years back, along with the Doctor remained up north as Tyler said, he only owns four Big Small Blocks and not DIRT legal engines.

No Western Pennslyvania drivers were in attendance. Last year three made the trip.

Demetrios Drellos is also in the “new parent” or “soon to be new parent” status. Otherwise he would have been here.

So for the rest of the week action will continue with hopefully four consecutive nights, but there are weather concerns for Friday and Saturday. However, much like the north you never really can predict the weather as the big track, New Smyrna and Volusia might all be running and be in a different weather pattern.