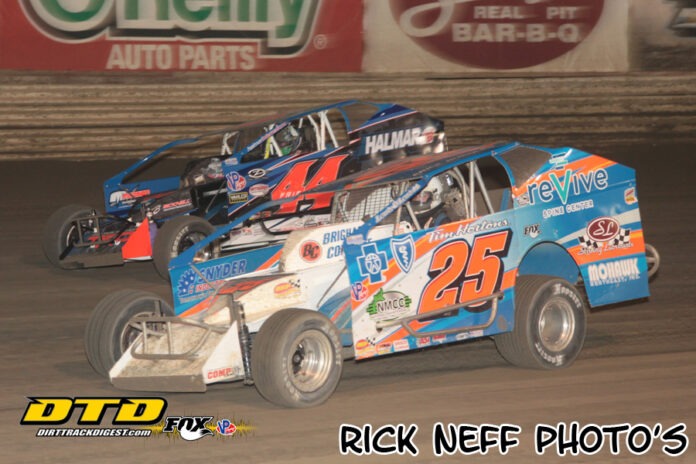 Announcer Shane Andrews has a new one, “It’s not hot, it’s not cold, it’s not chilly. It’s Freezin’”.

Stewart “Mr. Freeze” Friesen started sixth, but with 10 laps to go he stormed off the fourth turn on the high-side and went past leader Erick Rudolph for what ended up a 1.308 win for two in a row at the DIRTcar Nationals.

As always “Mr. Freeze” didn’t ice out anyone in his post race interview and continued to specifically mention Tom Conroy, Adam McAuliffe, Mike Mancini, Brian Burkhart and Jay Cassmore along with Chris Larsen, family members and all the product sponsors,

But in the course of the race action this was a fun race to watch as guys tried spots on the track that they totally ignored (because they weren’t there) earlier in the night.

Friesen explained that track was technical and that it was real slick in spots and spots that appeared to be slick were actually a place to gain a ton of grip. He referred to it as “Moguls on Ice.”

This one for a while appeared to be in the hands of Rudolph as he led early and then regained the point on the eighth lap and resided there through the 20th.

There was a wild start where fourth starting Max McLaughlin really went after it all on the first turn of the first lap. However, the No. 32 pushed up the track and kept pushing up. Unfortunately, pole sitter Mat Williamson was outside of Max and eventually got the wall ruining his hopes as well as a portion of his front end.

The early going was see saw, run all over the surface race, using the entire width between Max and Erick. They swapped sports numerous times. It was a battle royale.

Traffic played a roll as Max at one time just past the third point of the race got caught behind Darwin Greene and lost valuable real estate.

While attention was on the lead duo, as well as it should have been, Friesen suddenly was up to third by the 15th lap.

However, when Tim Fuller was forced to be towed off the track on the 19th lap the complexion changed considerably and exactly one lap later Friesen was leading.

Jimmy Phelps made the right turn to the pit gate with seven to go.

With just two laps left Maresca got under Max on the backstretch for third.

The final two laps was a repeat of opening night with Decker and Max duking it out for fourth and fifth.

In the end Friesen, Rudolph, Maresca, McLaughlin and Decker were the top five while completing the top ten were Britten, Lehner, Hearn, Sheppard and Tyler Dippel.

Derrick McGrew’s car was back together as the crew replaced major parts in the front end and repaired body panels.

Fast time was the last car out in the final group as Friesen turned a 17.634.

Lehner was clocked at fast time of his group with a 17.746 while Williamson and Maresca were also fastest in their groups.

Heat one saw a large Williamson lead dissipate as Decker passed him only to have Mat get back under him at the very end to win by .044 of a second.

With everyone qualifying it only mattered for the top two finishers to get into the draw.

Sheppard won from the outside pole over Lehner in heat two.

Jimmy Phelps made a run at Jack Lehner, but it was to no avail at the end.

Maresca and McLaughlin got the draw in the third heat.

While in the last one Britten unexpectedly made it exciting as he spun out on the first turn of the first lap. Later the team noticed a bent tie rod. He rallied for third, but started behind the draw winners, Friesen and Rudolph.

As Britten spun the carnage left Kyle Coffey and Wright against the wall, both had to be towed off, but were back for the feature.

Coffey has had some tough luck after losing a motor and a transmission in domino effect style at Bubba. He came up two laps off the pace on Wednesday.

With the Mod last on the card the WoO Late Models feature was wild to say the least as they didn’t drive around the ruts entering one and three. They simply drove through them. In the end Kyle Stickler won.

Mod fans were watching outside pole sitter Tim McCreadie, but something in the rear end broke on the second lap and he was done for the night. So my question after that was, “Who do I watch?”

The teams will do it all  over again on Thursday night and it should be interesting to see how it plays out for Friesen as he has NASCAR Truck practice until at least 6:30 p.m. on the big track. He will no doubt miss time trials and indicated he hoped to be there in time enough to jump into the back of a heat. Otherwise he will be coming from the back in the feature as once again all Mods qualify.