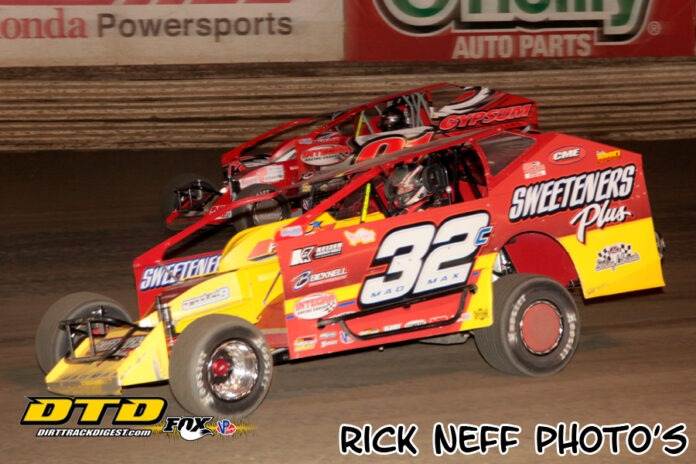 Top fives two nights in a row certainly doesn’t make Max McLaughlin satisfied, but he’s put himself on record as being a contender night in and night out at the DIRTcar Nationals at Volusia.

On night two Max’s Sweeteners Plus ride continued to get better, but after time trials he appeared disappointed as he stood alongside his car.

Asked about his mood, Max said, “Yeah, we got second, but it’s not very good with the holes.  The holes are pretty awful here on entry and everybody has to race around them. The best car right now is Friesen and he knows how to get through those holes. We just have to get better. We are kind of lost on what direction to go, but we are just going to try some stuff and see what happens.”

In regards to the track having some “character,” Max explained, “It’s pretty tricky. There’s new clay and it just seems they can’t figure out why it is so rough on corner entry, but it’s definitely tricky.  Everyone’s gotta figure out how to get around it or through it. We just aren’t as good as they are yet. Turns one and three are pretty horrible. You have to go around almost by the fence on entry to miss it both times. You just can’t run anywhere else on the track.

“That was part of the problem on the first night as you couldn’t run anywhere because you hit the hole and you are a foot off the ground revving your motor. We will get better.  Hopefully it slicks off and the holes will straighten out a little bit. The Late Model feature is first so that might help.”

On the first night Max came home with a top five, but it wasn’t what he had desired.

Looking back he explained, “It wasn’t horrible. It was too tight. We had a third place then a lapped car came up on me on the last lap and I hit the fence pretty good. It is what it is. It was a racing deal.  We came back tonight, we’ll throw something at it and see if we can get any closer to the 44.”

McLaughlin will see a very busy racing schedule this year and is looking forward to putting himself in the cockpits of various style race cars on totally different surfaces.

He started out earlier this week at Bubba Speedway in a USAC Midget where he picked up a heat win.

There was excitement in his voice as he said, “We had a lot of speed, but had mechanical failures both nights. We were fastest in the first practice, but stumbled a bit with bad fuel. Then we were second overall to Tanner Thorson and I had an engine expire. Tough luck, but I am definitely learning a lot about those things.”

When asked how the Midget ride came about he explained, “I ran a Midget once before, but I don’t really count that because I flipped in hot laps.  John Mitchell, the owner, is a really cool guy and he builds those Honda engines and is working hard to develop them.  I figured we would help him any way we can and give him feedback to try and make it a lot better to do well in USAC.”

Mitchell is based in North Carolina as Max noted, “He’s located about five minutes from our shop so it’s really easy to go and help them guys out for sure.

Looking ahead to ‘21 Max said, “We are running the Super DIRTcar Series with the Coffey-McCreadie Enterprises 32c. Driving Norm Hansel’s 357 full time on the Short Track Super Series. I am jumping into a truck, hopefully, a couple of times this year. Jerry Putnam is letting me drive that NASCAR Whelen Modified again. I am just  racing a lot in whatever I can get and if some USAC shows come about  I would like to be there. I’ll run whatever.”

So Max McLaughlin is rarin’ to go and he would like nothing better than to get to victory lane this week at Volusia. The team is working hard, making adjustments and they have him in the top five nightly, but he just wants to get a few more positions.