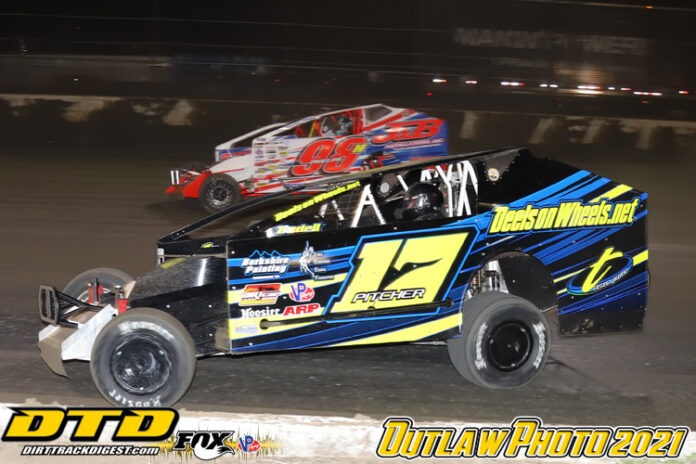 Even though Rob Pitcher is a regular at the Lebanon Valley Speedway, he really didn’t have to drive that far to compete at the Short Track Super Series events at Bubba Raceway Park or the DIRTCar Nationals at Volusia Speedway Park.

Pitcher, who resides part time just south of Daytona, has brought the No. 17 out for the winter racing here in 2021.

Rob talked about what brought him to Florida for racing this year as he said, “My son lives down here and we are sick of the cold, sick of the winter. We have a house down here and try to spend seven or eight months down here and less in New York.  We are trying to get down here nine months of the year and spend only three up north.”

He has gained some quick impressions on tracks that are quite different from his regular Saturday night haunt as he said, “Well, in the last two weeks we had an incident over at Bubba, but had a good car over there. We also had an engine problem over there, but we got our other engine in tonight. It doesn’t have as much power as we hoped for here, but  we will make the best of it, get in every night and just try to get through the rest of the week without any incidents before we go home and get prepared for our regular season.”

In talking about anything he can carry over from Lebanon Valley to Florida tracks, Rob said, “Not really. Bubba is more like Albany-Saratoga and we’ve done some racing up there and had a lot of fun up there, but we aren’t going back there this year due to running a limited schedule. Lebanon is kind of speed-wise like Volusia, but this place is just awesome. It’s hammer down here, and when your cars right and the track is right, you can just about flat foot it around the track. It is just a lot of fun down here.”

Continuing he said, “The first night we had some handling issues with the holes that are on the track, but I think they are under control tonight. We are starting fourth in our heat race. We are just working on it and trying to get better every night.”

In talking about what he hopes to accomplish over the remaining days, he explained, “I just want to get some top ten finishes with this race car. It’s a brand new 2021 Teo with an older, but really good Bedell Engine in it.  It’s just older technology, but it runs good. Just want to try to finish every night, clear with no incidents and have some fun.”

Looking ahead to when the snow melts and he can go back racing in the Northeast, Rob said, “Lebanon Valley full-time whenever they post the schedule and Albany-Saratoga on a limited schedule. We will see what happens in the fall and see where everybody wants to go. I don’t have time for either tour, but maybe something in the fall if there is a three day deal somewhere. However, we might hit some Short Track Super Series stuff possibly. We will see what happens.”

He talked a bit about the difference of running STSS and DIRTcar with American Racers versus Hoosiers and said, “I’ve run Hoosiers, but the American Racers are a new animal. I really like them. Brett Deyo does a great job with what he puts on and I was really impressed with the way he ran the show over there. The car sets up differently with tires. American Racers stick better and have a much better grip that the Hoosiers do for sure.”

So Rob Pitcher has gained some new experiences in the Sunshine State, but unfortunately on night two he completed just 20 laps to finish 28th, but there is always another night.