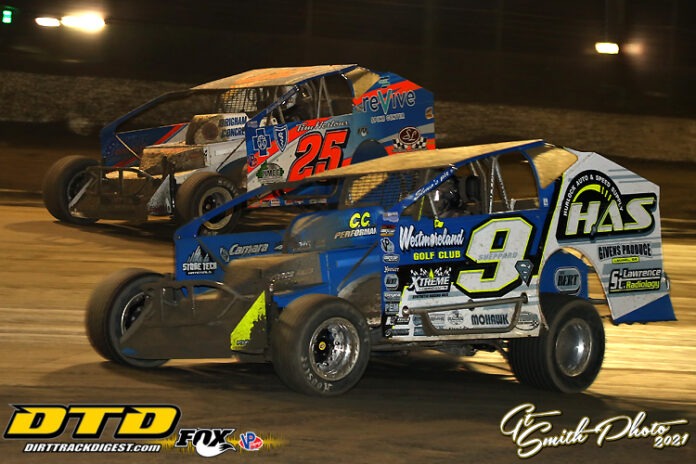 At 12:30 on Friday morning the Super DIRTcar Series Modified main hit the race track at Volusia and with Stewart Friesen having to be at an early morning meeting at the “Big Track” the two time winner was gone.

Thus was the possibility of a “madman” feature.

Anticipation was high as so many drivers have been scrapping and scratching to get to the top of the heap during this year’s edition in the Sunshine State.

The event started off inauspiciously as Max McLaughlin indicated, “I hit water” between one and two. The result was contact with the Matt Sheppard 9s, who appeared to been on the cusp of having his best night of the week. However, he bounded outside and collected Peter Britten against the wall.


Sheppard expressed his displeasure with Max as the 32 came around.

Jimmy Phelps, whose team really reworked the car overnight, was the early leader and the battle with Mat Williamson was a classic.

Jack Lehner brought out the second yellow of the race as he stopped entering the first turn and pulled up alongside the inside guardrail.

While the 98H and 88 tussled at the point a classic three car confrontation was going on between third place McLaughlin, Ryan Godown and Decker.

Matt Stangle, who had his best run of the year and qualified second in his group, broke a right rear shock and he excited on the ninth lap.

With 12 in, Williamson went to the front and seconds later McLaughlin followed.

Max pulled away, but a late yellow when Tim Fuller, driving a Maresca back up car, sustained a flat tire brought the field back together.

The stage was set for a climatic finish as the veteran Decker did everything in his power to get past McLaughlin. Decker was getting sensational runs off the fourth turn and appeared ready to make the pass on the high-side entering turn three when Max shut the door and sealed the outcome.

At the checker it was McLaughlin, Decker, a late closing Maresca, Williamson, Sheppard (from the rear of the field) completing the top five.

Rudolph, Phelps, Coffey, Britten (he too rallied from the pits as the crew hammered out a heavily damaged nose piece after the first lap tangle), and Dippel finished sixth through 10th.

Emotions were high as Sheppard once again expressed his displeasure with Max’s first lap move as he visited the Coffey-McCreadie Enterprises pit area afterwards.

Expectations were rain would hamper racing at Volusia on Friday and Saturday, but that changed abruptly at 7:25 on Thursday night as sprinkles started, fans got up and started moving, rain got steadier and it was off to their cars.  As they sat there a torrential car washing level downpour seemed to make one think this night was over.

Around eight the rain subsided, and despite the track being underwater, the officials determined the show must go on.

And with that, fans were guaranteed of a wet and damp marathon.

Three World of Outlaw heats had been displayed to the fans when it started and it would be hours later before racing resumed.

It was sort of typical of the Stewart Friesen week as it allowed him to get back to the track from truck practice at the big track about 25 miles away.  He ended up loading up for the night due to the delay and an early day at Daytona planned.

Obviously the No. 44 of Friesen, but also 13-year-old big-block rookie Derrick McGrew Jr. The teenager explained, “The pick up moved when we rolled over the other night.”

Other than that, in the first group two drivers who got up close and personal on the start of Wednesday night feature ironically timed one-two with McLaughlin timed at 17.629 for overall quick-time of the night. Mat Williamson was second quick. Following were Jim Britt, Tyler Jashembowski, Kyle Coffey, Jersey Mueller, Justin Wright and Cass Bennett.

In group two, Jimmy Phelps rebounded from a tough night where steering does sent him to the pits with a few laps to go in the main. He led the group with an 18.043 while the strong performer of the week Peter Britten was second. Others right behind were Tyler Dippel, Rich Scagliota, Brandon Hiightower, Marcus Dinkens and Darwin Greene.

Sheppard ended a string of off nights by grabbing pole with a 17.765. The surprise had to be second quick Stangle with his best qualifying of the week. The next five were Brett Hearn, Tim Fuller, Dave Rauscher and Rob Pitcher.

So rains hit and everyone loaded up. Many appeared ready to call it a night, but racing would go on and at 9:25 The final three heats of World of Outlaw Late Models ran the track in.

That surprised numerous big-block teams as there was an expectation they would be called out.

So a little before 11 pm , three and a half hours after the rain started, it was back to racing action.

Who would have thought?

Eventually the Mods went out to help iron it out. The fourth turn remained quite heavy and they were needed.

Heat action saw Williamson and McLaughlin go to the redraw from the first one as the two touched between one and two with Max’s front end lifting off the ground.

In the second heat Cajun invader Brandon Hightower, who had one of his best time trials of the week, sustained electrical issues and was pushed back to the pits unable to fire.

But in the end it was a two car runaway race between winner Jimmy Phelps and Peter Britten.

Jack Lehner and Ryan Godown put on a show for the fans as they went to the redraw, but during the last half of the race Billy Decker was running the duo down providing a wild three car battle.

The final redraw spots went to Sheppard and Matt Stangle. Matt said, “I haven’t been able to steer the car all week,” but tonight was significantly different as the adjustments appeared to work.

So while the WoO Late Models continued their feature the majority of Modified fans were on the road well after 1 a.m. on Friday morning to head back to their homes or hotels for a short night’s rest before the Modifieds do it all over again on Friday night.