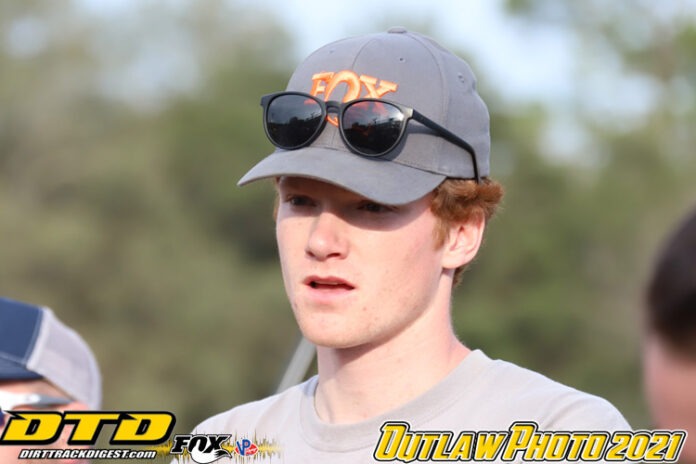 In time trials and heat action Jack Lehner has been running toward the front of the field throughout the week.

However, he just hasn’t seemed to have as much luck in the feature.

Once again on Thursday night he was a driver to be noticed in the early going as he was fast time in his group and easily captured his heat.

The feature just didn’t go well as he noted as he rolled to a stop in the first turn as he said, “A spark plug blew out of the engine.”

Lehner talked about the first two nights and said, “You know I am happy and we have been fast early. We were pretty good on Wednesday night and we could race with the leaders, but after that caution I just needed to re-fire better, but I really think now we have something to build off of. I am happy as we unloaded pretty quick and I think we are pretty close here.”

In talking about running with the leaders, but then falling back he explained, “That real long caution sealed up the right rear and it took four or five laps to get the right rear to come back in. We were all bunched up and it was a bunch of real good guys, so I fell back a bit, came back and fought with Peter (Britten) for sixth and reeled those guys back in, but too little, too late.”

He was satisfied with the ability to be fast time in his group on night two and repeated that on night three. Jack said, “It’s good. Fast time in our group both nights and we’ve even had Sheppard in our group, the 7MM is a good car so I am happy about that.”

Even though he is a relatively new driver comparted to the others among Modified elite, he said, “It’s good. We had our fair share of struggles and paid our dues and stuff. We are finally starting to see some glimpses of success to show we can really run with these guys.”

Hailing from eastern New Yor,k the Siena College marketing major has had a brief career.

He said, “This will be my fourth season in a Modified and before that I ran Sportsman for a year and a half.”

Jack put this team together from scratch and is starting to make his presence felt.

Reflecting he said, “I do all of it in the shop and round up some buddies to come to the track to help out, but I am pretty much the lead in everything. I deal with all the sponsors and all the finances and also taking care of the cars. Sort of a one man band in the shop during the week.”

Looking forward to expectations Lehner, who had won some features last year, said, “The ultimate goal is to get a win. That is why we came down here. I really want a gator. If we can run top three, top five the next couple nights I will be happy with that, but in the end wins are what matter and I want to get one of those.”