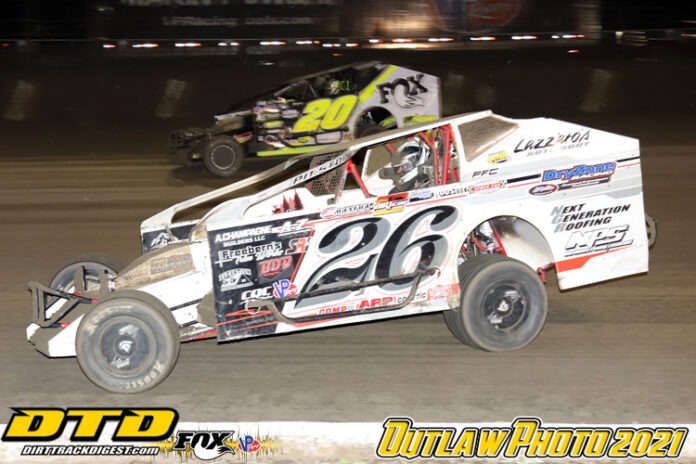 Thirteen-year-old Derrick McGrew Jr. is getting his first taste of big-block racing at Volusia and he is looking forward to kicking off the next venture in his young racing career.

Dirt Track Digest talked with the teenager as he prepped for action on Thursday for night three of the Modified action.

It was a baptism under first this week and Derrick said, “Yes it is. It’s been pretty good. We are learning a lot this week. Hopefully, we can make a couple of changes today and tomorrow and get the car better.”

On his trip to make his big-block debut in the Sunshine State, he said, “We just wanted to come down here, get use to the track, get some good runs in and just learn.”


McGrew hails from the Sportsman ranks where he was quite successful, and explained, “We’ve run Sportsman and I started racing crate cars when I was 10. We tried to do these last year, but our motor blew up. We now have the big-block back in here.”

The first night was an adventure for the young driver as he ended up on his top in the first turn.

Reflecting on that, he explained, “You had to run the top and had to drive it in hard. I just missed it a little bit, jumped the cushion and started to roll. I tipped over and there was damage, but it wasn’t bad damage.”

Anticipating the upcoming season, he said, “We are not really sure about our plans yet. So we will be coming out with some pretty big news so we will keep you updated. We are hoping to do really, really good this season. We are ready.”

At the age of 13 he feels he’s prepared and noted, “I am pretty use to the car and just learning. Coming down here and running all these races is really good for me. You have to  drive a bit differently with the amount of power in this compared to a Sportsman. I definitely enjoy it a bit more than a Crate.

“As far as making a mistake in this and you can kind of make up with it with your power.  If you mess up in a crate car you have to keep your momentum up so you are kind of done. With this it is easier to make a mistake and catch yourself up.”

In regards to the mental challenge that awaits him he said, “I get mad like anyone else if something happens, but I just need to get that seat time, get a lot of learning and get some good runs in today and the rest of the week. It’s been rough this week, but we are getting better.”

On Thursday night he was unable to get things going early as he noted, “When we rolled over the fuel pick up moved” and the car wouldn’t fire.

However, in the main he was moving in the first half of the feature and trying the high side of the speedway while challenging for positions.

Unfortunately he pulled into the infield off the second turn on the 19th lap to end his night.