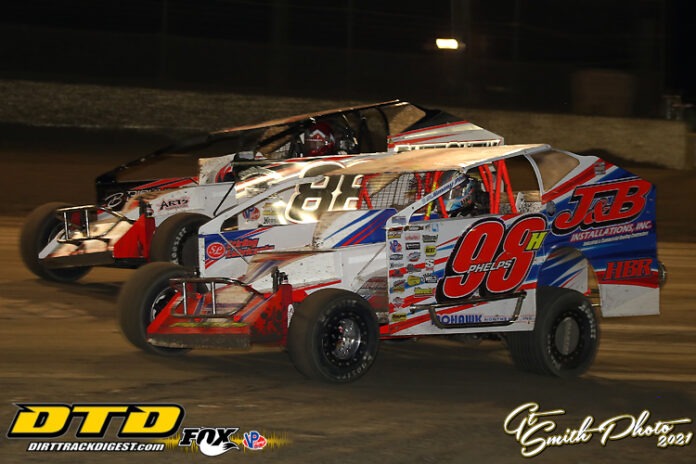 Jimmy Phelps has had some good moments at Volusia in the latest edition of the DIRTcar Nationals, but he hasn’t been as consistent as he had hoped.

Looking at what has gone down, prior to Thursday night, Jimmy said, “We haven’t been able to back it up in the feature, backed up and last night had a halfway decent qualifying effort, but struggled even worse. We are going the wrong way. We went back today to square one and looking forward to getting back on the track tonight.”

Continuing he said, “We don’t put a lot of merit into what we do down here, but  we are here, we want to race and we want to win. Obviously, when the car was that bad you want to make sure that nothing is wrong with it before the start of the season and that is kind of where we are at right now.”

Not only has Jimmy fought with the car, but he talked about the inconsistent surface saying, “That’s about the bottom line for everybody. You know you carry a ton of speed and the air is super funky on our cars and when you carry that much speed and there are some real interesting character traits to the place that kind of can upset the car. Then you get into a situation where the surface seems to tend to do some things to the tires that we are not use to. So every lap is an adventure.”

When asked about the benefits of running the Modified main before or after the Late Models, Phelps said, “I pretty much stunk in both of them, so it’s hard to say. Honestly, the times were a bit different, but the car seemed the same. I don’t think the track changed much.”

Friday morning at 12:30 a.m. as the feature started with Jimmy on the outside of the front row. He had been off to a good start with a fast time in his group and an exciting win over Peter Britten in his qualifier.

He led the first third of the race, but while doing so put on a tremendous side-by-side, bumper to bumper race with Mat Williamson.

However, just after the midway point he started to fade slightly and settled for a seventh place finish.

Phelps is one of the veterans of the Modified wars and reflecting on that said, “This is my 30th years and that is after starting out in Street Stocks. I’ve been doing this a long time and I don’t know how much longer I will do it, but hopefully I have a few more good years in me.”

Continuing he said, “I guess I have between none and a few years left driving.”

Jimmy wears two hats and being the promoter of the Weedsport Speedway consumes quite a bit of his time.

He is coming off a less than regular season as he didn’t chase around the circuit looking for shows last year.

Explaining his reasoning, he said, “We did a couple of things outside our normal schedule and went up to Vermont a couple of times. Really, we stayed close to home and did some Canandaigua stuff and obviously Oktoberfast was an incredible opportunity for us. We didn’t chase around. We tried to stay tight to the DIRTcar rules and big-blocks. There wasn’t a big opportunity to do other things within our package.”

As with most tracks in New York they were “covided out” in 2020.

Looking ahead to this season, the promoter said, ”Our marque stuff, with the exception of our June stuff, is still on tap. We are trying to be a little bit cautious on how early we release stuff because we don’t want to be a situation where we let people down.”

Continuing he said, “We are planning our Memorial Day race that’s been there for years and kick off full swing on July 4th with ESS Speedweeks and we will have big-block Modifieds with them. At the end of July we have the Hall of Fame 100. We have the World of Outlaws coming into town. AMA bikes are coming back and we have some cool stuff in September and October. There is going to be enough racing, but we are approaching it with caution.”

New York State announced this week it was allowing a limited number of spectators in indoor venues.

Jimmy said, “The news yesterday didn’t really apply to us, but it is a good first step and I think there is enough time between now and the heart of our season where there will be more to come from that front. I know there are some advocates for auto racing in general who are working on some real good stuff. We are optimistic.”