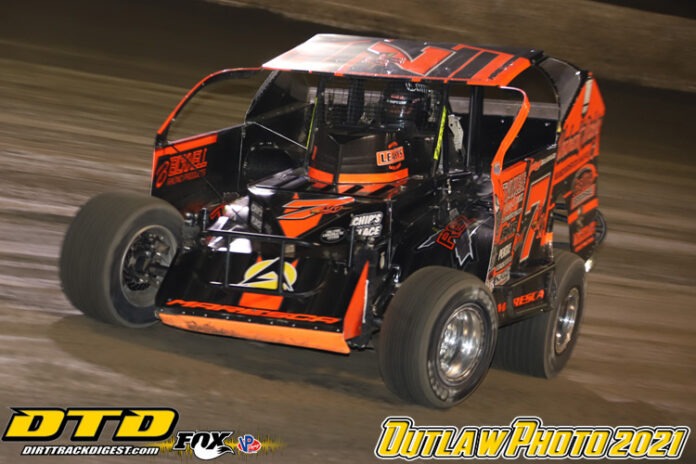 Well, the fourth night of Modified action at the DIRTcar Nationals had a few surprises and provided fans with a new winner.

Mike Maresca, starting from the pole, had a crowd-pleasing early race battle with the high side running Matt Sheppard and suddenly it appeared whoever got the lead before the track rubbered down would have the advantage.

While they did battle at the front, the secondary three-way fight for third between Ryan Godown, Billy Decker and Peter Britten was also attracting the fans’ attention.

It was green, green, green, thus allowing Maresca to build up a 7.7 second lead over Sheppard, and it was early on when the track started to rubber up and completely lock down.

Shortly after reaching the 10 lap mark, everyone just fell in line and simply hoped the driver in front of them would made a critical mistake.

Finally, the one and only yellow flag bunched up the field with six laps to go. Tyler Dippel had slowed off turn two erasing the 7.7 second advantage Maresca had.

During the later stages of the race, only Brett Hearn was willing to go off the bottom. He was in 11th and pretty well locked there. However, it was an all or none situation for him. He got off the bottom and you could see the car sliding, it appeared the handling anywhere off the bottom simply was not there.

At the checker, Maresca had his first ever gator trophy while Sheppard had his best finish of the week in second.

Billy Decker remained in the hunt for the big gator championship with his fourth straight top five finish, placing third.

VanInwegen had the best, by far, effort of his week as they have been working on getting the new car working after really losing 2020. He was overjoyed with the fourth place spot from his seventh starting position.

Godown, who at one time had worked his way to fifth, came home sixth and was followed by Phelps, Williamson, championship gator leader going into the evening Max McLaughlin and Tim Fuller.

There simply wasn’t a ton of movement after the tenth lap.

At the checker there was contact between Dave Rauscher and Marcus Dinkins as the 48Too chased most of the race, but got inside only to have the two cars make contact and the car had to be assisted from the track.

Brandon Hightower finished 27th as he was the first car out after four laps. He said, “We have a flutter that we just can’t find. It’s probably a little thing and I’ll probably be pretty irritated when we find what is causing the problem.”

Kyle Coffey, coming off a top ten finish the night before, went out with Dippel on lap 23.

A lap down at the finish were twenty-first place Rauscher, Darwin Greene, Jeremy Smith and Marcus Dinkins.

Thirteen year old Derrick McGrew Jr. had his top finish of the week in 20th, but the good news for him is that he was the last car in the lead lap.

Obviously, Stewart Friesen was at the big track with his truck while Rob Pitcher, Cass Bennett, Justin Wright and Tyler Jashembowski were absent. All of those haulers, with the exception of Wright and Friesen’s were apparently headed home.

There were also 12 less Late Models in the house that the night before.

The 38 car Late Models and 27 Modifieds are the lowest in recent memory.

Time Trials saw Godown eke out a better time than Maresca in group one while Max and Billy, who were one-two in the main just hours earlier, went to the draw in group two. With so few cars there were just three groups.

The third was simply a “WOW” pack with fast time Sheppard followed by Britten and it also included Phelps, Hearn, Lehner, Rudolph and Dippel.

Sheppard had the fast time of the group despite smoking heavily due to an oil line leak.

In heat action the cars didn’t get very far across the start-finish line when one stalled and Dinkins locked it up, but suffered a broken front shock bolt as well as cosmetic damage. His crew thrashed to get back to the main.

Godown was the early leader only to have Maresca get him off of turn two.

Max and Decker battled early and then the 32 got some breathing room. Decker was breathing down the leader’s neck but simply couldn’t get enough momentum needed to close in. Fuller, Britt and Morey followed.

Sheppard ran away with the top spot in the third and final heat with Britten second. Phelps, Rudolph and Hearn completed the top five.

An efficiently run show was started just before seven and by 9:15 p.m. the show was over.

Only one yellow in the Mods and a yellow and red in the Late Models.

For days the weather forecast was one of rain on Friday night and possibly that was in the back of the minds of officials as they decided to by pass the on track draws.

It appeared to be one of the smaller crowds of the week as many fans mentioned to me that there was a concern with rain.

Hopefully, the show will get in tonight as Max and Billy are dueling it out for the big gator. 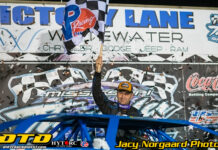