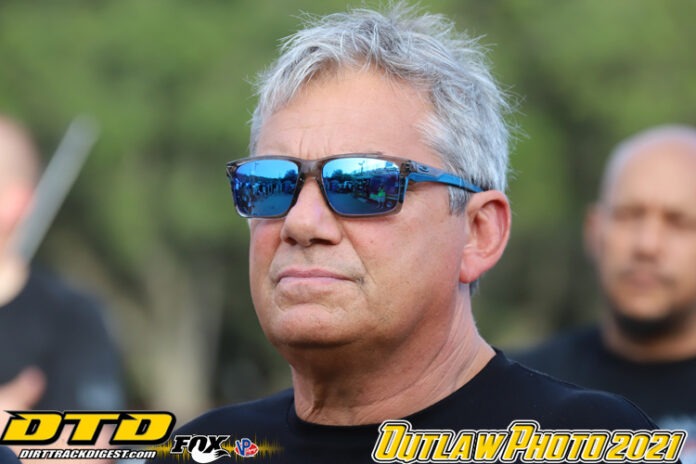 Brett Hearn won his first DIRTcar Nationals feature at Volusia in 1993 and continued to show his liking for the place as he continued to chalk up wins year after year.

He has a total of 20 victory lane celebrations, with the last coming in 2017.

However, his full-time racing career is over as he has moved into running the Orange County Speedway, a place where he has many of his more than 500 feature wins.

But much like criminals return to the scene of the crime, race drivers are similar as sometimes they just can’t leave.

Such is the case this week as Hearn returned to Volusia in a rather weird part-time position.

Brett talked with Dirt Track Digest about his return and said, “It’s good to sweat a little bit, but you know it’s a bit of a struggle.  This is a tough track and we haven’t had everything go our way so guess we aren’t having a blast, but it’s okay.”

Prior to racing action on Friday night he reflected on what has come before and noted, “We’ve had some mechanical issues. Last night was a muddy mess because of the rain so we will come back tonight.”

However, Brett has made the adjustment from full-time driver to running a speedway and when asked it which was easier he commented, “Yeah, they are both difficult, but this definitely prepares you for that very well.”

In talking about making that shift from driving he said, “I’m good with it. Actually, I still feel that I’m not depending on racing to make a living which is the first time that has happened to me in 40 some odd years.”

The inaugural effort of running Orange County was not as easy as it might have been under normal conditions as COVID forced a change of plans.

Brett said, “Obviously we had a lot of plan at the track, but we really couldn’t stick to our plan as we had to scramble every single week on what we could do or couldn’t do. We tried to get things opened up. It was challenging, but after racing for 40 some years I’ve seen a lot of different challenges and still had a lot of successes.”

When asked if the situation for racing would change this year, Brett said, “I do. I actually do. I don’t know exactly what the protocol will be, but I don’t think anyone knows that just yet. I think we should have some fans in the stands and I am thinking that in some capacity by April and maybe much better by the summer.”

So he knows what he needs to do and will be doing in the office, but not the same for racing.

Brett said, “I’m taking a wait and see. I really don’t know what I want to do or what I can do really. I want to make sure that I have the other part of the job buttoned up and have problems solved. I don’t think I will be in the car much this summer. “

Racing has been his life and reflecting on that he said, “I don’t think that I ever thought I would be able to race for a living for two years, much less 40 years. I have no regrets, I am good.”